[Posted: 9:30 AM EDT] As noted below, we have a full slate of Fed officials talking today.  We expect these speakers to generally confirm the Fed’s policy stance for at least two more hikes this year, with the potential for a third.  The most interesting member, Minneapolis FRB President Kashkari, has already made the media rounds; he had a dovish dissent to the move, arguing that there is no evidence of accelerating inflation or rising expectations.  Thus, in his analysis, there was no reason to move rates.  We would not expect such talk today.

The FBI director testified yesterday that there was no evidence of wiretaps on Trump party headquarters and did suggest that there was a broad investigation of Russian interference in the U.S. election.  We doubt this investigation will rise to the level of Watergate; however, it will act as a distraction to the administration.  Our position is that presidential political capital is at its peak on inauguration day and, like time decay on an option, is eroded until nearly fully diminished 18 months after the oath of office.  Despite this obvious pattern, presidents often squander their limited and perishable political capital on superfluous policy battles.  Health care is burning a lot of the president’s capital as are all the investigations which divert attention.

The financial markets have been focused on deregulation and tax cuts, sending equities and the dollar higher and bond prices lower.  However, we are starting to see the dollar roll over despite Fed tightening, in part because there is growing skepticism that the administration will be able to get tax reform in place.  Tax reform is one of the factors that has raised market sentiment and if the administration becomes bogged down in health care reform and defense against investigations, there simply won’t be enough bandwidth to get much of anything else accomplished.  This is an issue we are watching closely.

There was a French presidential debate yesterday.  Media reports suggest that the current presidential favorite, Emmanuel Macron, managed to avoid any major mistakes.  Although Macron is currently second in the polls to Marine Le Pen (Le Pen is at 27%, Macron at 23%), the polls all signal a Macron victory in the second runoff election.  Macron is relatively inexperienced and there were fears among Le Pen opponents that he would make a mistake at the debates and boost Le Pen’s chances for the presidency.  According to reports, Macron, though not spectacular, did avoid losing.  The EUR’s rally this morning is partly due to his better performance.

SOS Tillerson announced he will skip the NATO meetings next month to be with the president when General Secretary Xi visits the U.S.  His office also announced he will visit Russia later in April.  This sends the signal that the administration is focusing on the big nations and paying less attention to the smaller allies in Europe.  There is some fear that the U.S. is also indicating a greater affinity for authoritarian governments and paying less attention to democracies.  The charge of playing to enemies and ignoring allies was leveled at the previous administration as well.[1]  It should be remembered that one of the goals of creating the EU was to give Europe a platform on the world stage.  Henry Kissinger famously destroyed this idea with his comment,   “Who do I call if I want to speak to Europe?”  Europe still hasn’t solved this problem.  Simply put, the trend of U.S. administrations paying less attention to Europe has been underway for some time.

Finally, despite strong sentiment indicators, the Atlanta FRB GDPNow forecast is currently at an anemic +0.9%. 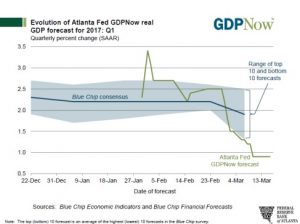 In the contribution data, consumption has declined 108 bps from the initial forecast and inventories have reduced the growth projection by 39 bps. 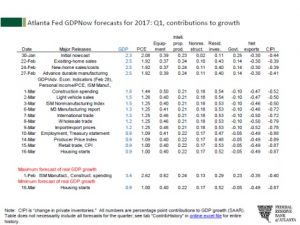 We are looking at a soft Q1 number.  Consumer confidence data suggests that consumption should improve in the coming months, although the relationship is not always consistent. 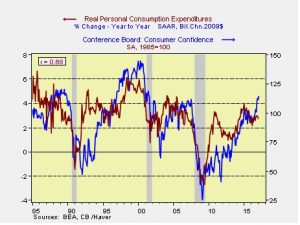 This chart shows real consumption expenditures with the Conference Board’s Consumer Confidence report.  In general, they do move together, although a case could be made that consumption led confidence in the early 1990s and in 2011.  In addition, consumption softened in front of the last two recessions despite elevated confidence.  The divergence between rising confidence and sluggish spending is something we monitor.  So far, this isn’t a major problem; however, it could develop into one if this situation persists.