Good morning and happy Friday!  “There are decades where nothing happens, and there are weeks where decades happen.”  This quote, misappropriated to Lenin, seems to capture much of how things feel right now.  It’s a “green screen day” with equity futures rebounding around the world and the dollar finally taking a pause from its recent strength.  We update COVID-19 news, including comments about global stimulus activities.  Here are the details: 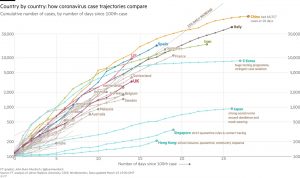 The U.S. pace of infections is rising rapidly; this is probably more about increased testing.  Sadly, there is no evidence of the bend we usually see when a country is getting on top of the spread.

Expect continued market swings.  Policymakers are moving in the right direction but the economic impact of battling the virus has been significant.  Enjoy the weekend.  We will talk to you on Monday.