It’s March!  February seemed unusually long this year.  There is lots of news this morning.  We are seeing some signs of equity market stabilization, but risk-off markets are also doing really well.  We update the COVID-19, including China’s PMI data (quick update—it was historically bad).  One war is starting; it looks like Syria and Turkey are going at it.  Another war may be winding down as the U.S. and the Taliban have agreed to a deal.  North Korea fires a couple missiles.  Here are the details:

COVID-19:  The number of official reported cases is 89,197, with 3,048 fatalities.  We also note that the number of recoveries is 45,175.  The U.S. now has two fatalities, both in Washington state, and 86 cases.  New York City has a confirmed case as well; there are worries that COVID-19 may have been circulating for weeks in Washington state.  Australia has recorded its first fatality.  The virus is now spreading faster outside of China.  Iran is reeling from the disease; the state is raiding homes and businesses suspected of hoarding masks, and the virus has claimed a senior member of the Expediency Council in Iran, Mohammad Mirmohammadi.

China’s PMI data came in much weaker than expected and shows that the impact of the virus and quarantines have clearly left a mark.  This data is the weakest on record. 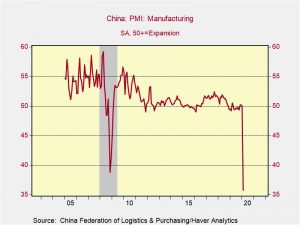 The details offered little in the way of silver linings.  New orders fell to 29.3; new export orders plunged to similar levels.  Given this data, it will be very difficult for China to avoid a negative quarter for GDP.

The OECD came out today and warned that global economic growth is at risk from COVID-19.  In response, central banks and fiscal authorities are rolling out support packages.  The Fed and the BOJ both offered support, with the latter giving the most details.  There are also proposals to ease liquidity issues for the financial system with a temporary relaxation of banking regulations.  Commentators have noted that cutting the policy rate target won’t stem infections, but they would help to reduce the demand side aftereffects of the virus.  As we noted last week, the financial markets are signaling that the Fed needs to cut at least 50 bps and is leaning toward 75.  We also note that the 10-year Treasury yield flirted with 1% overnight.

Has anything changed in our outlook?  Not much in terms of timing but some in terms of impact.  We still expect this event to be 3-4 months in duration but the economic impact is probably going to be bigger than we initially thought.  In other words, the economic impact will probably be short but deep.  Essentially, the problem comes down to the quarantine issue.  If policymakers fear the disease is a “killer” then they should engage in aggressive quarantine policies which will hurt growth.  That is the lesson from China’s PMI data.  If, on the other hand, policymakers conclude that this virus is more of a nuisance and that most people will get through it just fine then quarantine measures should be modest and the economic impact will be less pronounced.  Of course, the risk of implementing less aggressive quarantine policies is that if COVID-19 turns more lethal, the impact would be grave.  At this point it is almost impossible to tell what the U.S. will do.  The administration is giving local governments the power to close schools, which would have a negative impact on the economy.  We do note that in the Spanish flu pandemic (a “big one,” BTW) local governments essentially dictated the response.  St. Louis was rather draconian in its response and suffered fewer fatalities.  But, the overall economic impact will be greatly affected by the degree of panic among households and businesses and the response of government.  At the same time, there is evidence from China that the worst may be over and recovery may be starting, albeit from a deep hole.

Syria and Turkey:  Following last week’s Syrian attack that killed dozens of Turkish troops, Turkey yesterday officially declared war on Syria and launched a major counteroffensive on its forces in Idlib province.  Turkish Defense Minister Hulusi Akar issued a statement saying the goal of the offensive is to stop the Syrian government’s fight against rebels in the area and prevent further refugee flows into Turkey.  The Turkish government also continues to press NATO and the EU to provide help in the fight, but NATO has so far limited its assistance to providing intelligence and airborne radar surveillance over Syria.  To gain leverage over the Europeans, Turkish President Erdogan announced he had “opened the gates” to Syrian refugees trying to cross from Tukey into Greece, raising the possibility of another large, destabilizing wave of migration into the EU.  Foreign ministers from around the EU have called an emergency meeting to map a path forward, while Greece has imposed a one-month moratorium on accepting new asylum applications.

Peace in Afghanistan:  The longest U.S. war may be coming to a close.  The U.S. and the Taliban have signed an agreement that, if fulfilled, would lead to the exit of U.S. troops.  There is still much that can go wrong.  However, it appears the U.S. has finally realized what the British and the Soviets learned—they don’t call Afghanistan the “graveyard of empires” for nothing.  Our expectation is that the country will be peaceful enough for U.S. troops to leave.  After that, the most likely outcome is a resumption of the civil conflict that was in place before we got involved.

Odds and ends:  Israel goes to the polls (again!) today.  EU and U.K. trade talks officially begin today; the chances of a hard break remain elevated.  North Korea fired off a couple of missiles.  OPEC confirms it will meet this week to address COVID-19; oil prices have stabilized on the news.  Anti-corruption populists win in Slovakian elections over the weekend.  Further evidence of climate change: for the first time since 1830, Germany will not make any Ice Wine this year as temperatures didn’t get cold enough.