[Posted: 9:30 AM EST] Super Tuesday didn’t bring too many surprises.  Donald Trump and Sen. Clinton both won the majority of states but, with proportional delegate distribution, all the candidates still running gathered at least a few delegates.  Soon we will shift to winner-takes-all voting, which should accelerate the process of nominating a candidate.

Yesterday’s equity market recovery was quite impressive, built on the back of improving U.S. economic data, at least relative to expectations, and dovish Fed comments.

This chart shows the Citi Economic Surprise Index since inception.  The index measures the performance of a basket of economic indicators, weighted by the bank’s economic team for importance, relative to expectations.  In other words, it isn’t necessarily a look at how the economy is doing per se, but relative to the economists’ forecasts.  We have noted over the years that economist forecasts tend to track the data like a moving average; thus, when the economy starts to improve, it takes a few weeks for the estimates to catch up.  Over the past two weeks, we have seen a rather sharp improvement in sentiment.  This does, in part, reflect a better economy but mostly shows that the forecasts have been lagging the improvement in the economy.  In any case, good news on the economy is partly a reason for the equity market rally. 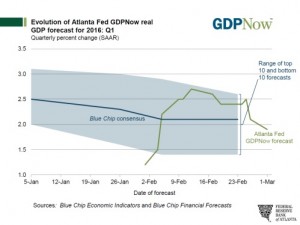 Q1 GDP is now on track for a +1.9% rise, down from 2.7% in early February.  Since the peak, the bank projects that inventories have shaved 50 bps from growth and residential investment has dropped 22 bps.  Government spending has added 16 bps.  Overall, the path of the data suggests that Q1 growth isn’t going to be much better than Q4 2015.  However, it should be noted that growth remains positive, in line with our forecast of slow growth but no recession.