[Posted: 9:30 AM EDT] Financial markets are broadly higher this morning; the only exception is the dollar, which is coming under some modest pressure.  Other than that, it’s a very quiet morning as we await the Fed.  Here is what we are watching this morning:

Brexit: PM May was dealt a probably fatal blow to her chances of getting her plan through as Speaker of the Parliament John Bercow ruled that the PM cannot keep cycling a bill before the legislature without making substantial changes, citing precedent dating back to 1604.[1]  For now, May and her team are feverishly trying to make changes to the bill that Bercow might deem “substantial” without triggering protest from the EU.  This pretty much means the outcome at the end of March is either (a) a chaotic exit, or (b) a long extension.  Most likely, outcome (b) will be the result.  The GBP did decline on the news but recovered and is higher this morning.  A long delay is a middling outcome and will probably keep the currency about where it is now.  A decision to remain would be quite bullish, whereas a hard Brexit would likely take the currency to around $1.10.

Populism in the Netherlands: We have been seeing a steady stream of reporting in recent months suggesting the populist threat in the West is overblown.  There is an element of truth in this claim; in parliamentary systems with proportional representation, no populist party has gained control of a government.  Instead, these parties have become “kingmakers,” in a way, since no established parties will put them in coalitions.  However, we think the brave talk from the establishment-centered media is probably misunderstanding the threat.  The problem is that the populists are forcing restructuring on political alignments.  In the Netherlands, Mark Rutte’s government is facing a serious threat from the nationalist Forum for Democracy, led by Thierry Baudet, who has replaced Geert Wilders as the standard bearer for the populist right.  Unlike Wilders, who has a difficult relationship with the media and has thus been characterized in the harshest terms, Baudet seeks out media coverage and manages it well.  The Netherlands hold elections on March 20; we will be watching to see how the vote plays out but there is a chance that PM Rutte’s coalition will fail to hold and new leadership could emerge from this important European country.[2]

Rising tensions between Germany and the U.S.: It is no secret that Chancellor Merkel and President Trump have a frosty relationship.[3]  Merkel represents the liberal establishment and leads the largest economy in Europe.  Trump is keen on overturning the liberal order.  In recent weeks, we have been seeing several areas of dispute between the two nations.  First, Germany has been among a number of nations that have been cool to the idea of banning Huawei (002502, Shenzhen, CNY 4.57) equipment on fears that the Chinese government has compromised the tech gear.[4]  Second, Germany indicated today it would not boost defense spending, reversing an earlier pledge.[5]  President Trump has been threatening the EU (read: Germany) with trade impediments if progress isn’t made on trade talks.[6]  The president has specifically included tariffs on autos,[7] which would be especially damaging for the German economy.[8]  In our opinion, the U.S. does have legitimate concerns about German behavior; its macroeconomic policies have essentially colonized the Eurozone and forced the currency bloc to become a net absorber of global domestic demand. 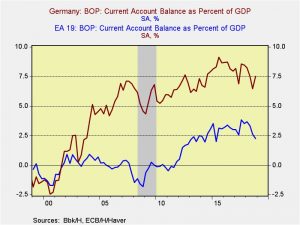 Although the Eurozone, as a whole, mostly had balanced trade until 2011 (when the PIIGS crisis developed), Germany has been running very large current account surpluses since 2005 and has led the Eurozone economy to become a microcosm of the German economy in the wake of the PIIGS crisis.  At the same time, U.S. policymakers appear to have forgotten how dangerous the German Problem is for Europe; from the time of its founding, Germany has been a threat to European security and its economic strength coupled with its geopolitical vulnerability was the underlying cause of two world wars.  It has only been the U.S. security domination of Europe that has led to extended peace on the continent.  If the U.S. presses Germany to take a larger role in European security, the outcome might not be what American policymakers intend.

A couple of unintended consequences: First, in the 2016 election, both candidates from the major parties vowed to reject the Trans-Pacific Partnership (TPP), a multi-lateral trade deal that effectively encircled the Pacific Rim and isolated China.  This trade deal, along with its twin for Europe (the TTIP), would have put the U.S. in the middle of the global trading system and forced the rest of the world, especially China and Russia, to accept the terms of the arrangement.  However, the trade agreements were structured along the lines of those made in the 1990s that extended globalization at the cost of living standards for the Western middle class.  By rejecting both TPP and TTIP, the U.S. (and, in fairness, Europe too) signaled an end to the trend of globalization that accelerated in the 1990s.  Interestingly enough, USTR Lighthizer has noticed that the rejection of TPP was a significant blow to American farmers who now face trade barriers in a number of countries that accepted TPP without the U.S.[9]

Second, social technology platforms have severely damaged print media.  Swap sites killed classified advertising and platforms that aggregated news essentially made reporting free to users even if the papers had to pay reporters for their work.  That creates an unworkable business model for local print media and, over the past 15 years, around 1,800 newspapers have gone out of business.  Facebook (FB, 160.47) has been building a service that would provide local news information to users.  However, it is discovering a profound lack of original reporting it can steal from local areas to publish on its platform.  All those newspapers that have been driven out of business by the swap and social platforms are no longer reporting local news stories.  The company notes “it doesn’t have the answers,” but “doesn’t plan to launch newsgathering efforts on its own.”[10]