[Posted: 9:30 AM EDT] It’s a modest risk-on day on this Monday in late winter.  Here is what we are watching this morning:

Fed meeting: As noted last week, the FOMC meets this week.  Although there are hopes that the Fed may set the terminal level for the balance sheet,[1] this action may not occur at this meeting.  The dot plot will be watched carefully to see if the FOMC is taking a dovish turn.[2]  Meanwhile, financial markets are clearly signaling that the Fed is on hold. 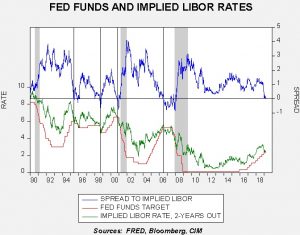 This chart shows the fed funds target with the implied three-month LIBOR rate on the two-year deferred Eurodollar futures market.  Historically, this rate has coincided with policy actions.  We have placed vertical lines where this spread between the target and the implied rate inverts.  The Greenspan Fed tended to cut rates when the spread inverted.  The Bernanke Fed did stop raising rates once the inversion occurred, but didn’t cut; this lack of action probably contributed to the 2007-09 recession.  The spread is currently sitting at zero.  The financial markets are not signaling a rate cut but they are clearly indicating that further tightening will increase the odds of a policy mistake.

OPEC+: OPEC and Russia are meeting in Baku to discuss oil policy.  This morning, the OPEC minister, Khalid al-Falih, suggested that inventories are still too high (we would agree) and that production cuts should remain in place.[3]  Oil prices have moved higher on the news.  However, Russia has been more cautious about cuts and future talks.[4]  The sticking point seems to be around extending the cuts into H2.  It appears the cartel and Russia will likely defer that decision until May.

Trade talks: It looks like China and U.S. trade negotiators are hitting the most difficult elements of the negotiations because we are starting to hear reports suggesting longer delays in a summit.[5]  The latest out of China is that a meeting might not occur until June.  Apparently, the U.S. is considering keeping the threat of tariffs in place to ensure Chinese compliance to the agreement.[6]  Not only will China probably not accept such a deal, but the continued threat of sanctions will affect U.S. domestic company behavior.  That is, the mere threat of trade sanctions will affect how American companies behave.  If the trade talks fail, it would have an adverse effect on U.S. equities as the stock market has mostly discounted an easing in trade tensions.

Yellow Vest unrest: The Yellow Vests returned to France over the weekend and targeted areas of elite wealth in violent riots.[7]  In some respects, the numbers in the protests are falling but the protests themselves are becoming increasingly destructive.  The Macron government continues to condemn the protests but it looks like its plan to deal with them is to simply wait out the movement.[8]

Brexit: Political machinations continue in Britain and the EU.  PM May could delay another vote on her exit proposal until next week, which would put it very close to the exit date.  May is pressing the junior partner in her coalition, the DUP, to support her exit plan.[9]  The EU is indicating that the U.K. can extend the deadline to July 1 and not participate in May’s EU Parliamentary elections.[10]  Otherwise, the U.K. would be required to participate in the vote, which is not the EU’s preference.  EU officials fear British participation would bolster the populist cause.

But, the most interesting insight on the issue may be a recent election in Fall River, MA, of all places.[11]  The mayor of the town, Jasiel Correia, was accused of defrauding investors, including some local residents, in a marketing app scheme.  Because of his alleged transgressions, the town mustered enough signatures to trigger a recall vote.  Correia, who denies any wrongdoing, was decisively voted out of office.  He received 38% support, or 4,911 votes; obviously, 62% of the electorate opposed him.  Thus, the recall effort was successful and he was removed from office.

However, the good citizens of Fall River needed a mayor if the recall effort was successful so they held a second ballot simultaneously with the first.  Correia boldly ran for mayor against four other candidates.  In the second ballot, he received about the same level of support but because of the multiplicity of candidates he won the mayoral race.  So, on the same day, Correia was ousted and elected to office.

So, how did this happen?  The Fall River vote highlights a weakness in voting.  Voting as a decision process is only effective if the choices are clear.  Otherwise, voting can lead to indeterminate outcomes.  That is why many nations use a run-off vote after an initial voting round to clarify choices.  Other political entities have tested rank choice voting,[12] where voters list their preferences if there are multiple candidates.  This weighted preference method tends to be better for situations of multiple candidates or voting decisions.

The Brexit referendum was poorly constructed.  The way the vote was perceived was either the status quo or something different.  Voters who were unhappy with their economic or social condition opted to leave.  But, the leave decision is actually quite complicated because what that looks like was never fully expressed.  In recent voting, Parliament has told us that it doesn’t like May’s plan, but it doesn’t want a hard break either.  Much like the Fall River vote, British voters opted for one outcome, to leave, but there probably isn’t a majority for any other outcome.  In Fall River, voters paradoxically voted to remove and elect the same man on the same day.  With Brexit, voters opted to exit the EU but with no clear preference for what comes next.

Perhaps PM May’s plan, after all, is the best there is to offer.  It won’t garner a preference of the majority but it may be the best outcome that can be negotiated.  If a new referendum is held, a rank choice vote may at least reveal a plurality that the British people and the EU can live with.

An interesting twist on bitcoin: Bitcoin has become popular in nations with capital controls or currencies in collapse due to hyperinflation.  Venezuela has both conditions.  Another coincidence is that Venezuela has cheap electricity due to hydropower.  Bitcoin mining absorbs a tremendous amount of electricity.  As a result, despite the government’s effort to prevent the use of bitcoin, which included the creation of its own cryptocurrency, Venezuelans have tried to produce bitcoin in a bid to create a store of value.  The recent power outage has created a crisis in bitcoin mining, which led to a 40% decline in volume.[13]

The Cheollima Civil Defense:A group[14] by this name infiltrated the North Korean Embassy in Madrid during the Trump/Kim summit in Vietnam.  The shadowy group, which wants to oust the Kim regime, briefly took control of the embassy and got away with a treasure trove of confidential information.  We will continue to monitor this group going forward.