[Posted: 9:30 AM EDT] As noted below, we have a large number of Fed speakers today.  Perhaps we will get further insight into the FOMC’s thinking on policy.  It is becoming increasingly evident that the Taylor Rule models, which incorporate the Phillips Curve, are either out or being temporarily superseded.  As we noted yesterday, the steady decline in inflation expectations is likely playing a role in tightening delays.  However, the forex situation may be even more important.  Bloomberg[1] is reporting today on speculation that the G-20 has engineered a dollar decline.  We find this discussion incredulous.  If the major central banks were trying to weaken the dollar, why would several European banks, including the ECB, ease policy?  Yes, the BOJ didn’t take any steps to ease further, but PM Abe appears to be increasing pressure on the BOJ to lower rates more.  Instead, we think the WSJ has it right.[2]  It has an article today with the headline, “Global Currencies Soar, Defying Central Bankers.”

We are starting to think that this is more like a quiet currency war. 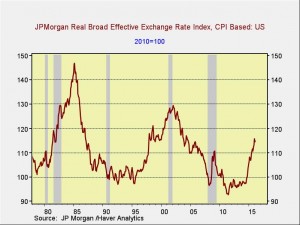 The chart above shows the JPM real effective dollar index, which adjusts for trade flows and inflation.  We are in the third major bull market in the dollar; as the chart below shows, it began in mid-2014. 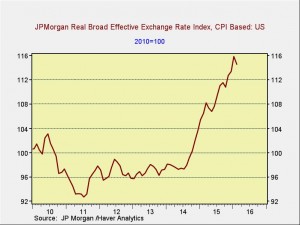 Note last month’s decline.  We can assume further weakness this month, too (although we won’t know for sure until all the inflation data is recorded).  In terms of policy, the dollar’s strength acted as a form of tightening.  However, for the FOMC, this is a rather difficult problem because the Fed does not have the mandate for managing the currency; that mandate rests with the Treasury.  Nevertheless, these constant comments about “global risks” may simply be a thinly veiled signal that the Fed won’t raise rates until the dollar weakens.

This scenario pits central bank leaders against each other, much like what history recorded during the Great Depression.  When there is a dearth of global aggregate demand, capturing that demand becomes a zero sum game.  The transmission mechanism for capturing that demand is the exchange rate. 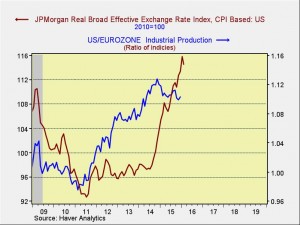 The chart above shows the ratio of U.S. to Eurozone industrial production and the JPM dollar index.  Note that when the dollar was weak, U.S. production outpaced Europe.  However, the relative performance reversed shortly after the dollar began to appreciate.  This occurred despite the fact that the Eurozone has been hit with numerous crises that have tended to dampen the region’s economic performance.

If the Fed is shifting to a de facto exchange rate policy, it means that our historical models won’t be all that informative as long as that policy is in place.  The other key to watch is the reaction of the other central banks.  If they hold policy steady, the aforementioned Bloomberg report may be correct.  In other words, G-20 monetary authorities are working in concert to boost the dollar.  We don’t believe it.  We think the BOJ and ECB, along with the remaining independent European central banks, will “do whatever it takes” to weaken their exchange rates.  We will have more on this topic in the coming weeks.