[Posted: 9:30 AM EDT] Before we dive into the Fed and oil prices this morning, there are a couple of geopolitical items worth noting.  First, Brazil is facing massive civil unrest this morning after wiretaps revealed that President Rousseff offered to appoint former President Luiz Inacio Lula de Silva as Chief of Staff in a bid to avoid his prosecution.  A minister is immune from prosecution.  Second, there was an outbreak of violence on the Sinai Peninsula today as insurgents attacked an Egyptian military base in Rafah and there were reports of other smaller attacks as well.  Egypt faces numerous insurgent groups in Sinai, including IS.

The FOMC came out with a dovish report.  As expected, the Fed left rates unchanged and KC FRB President George dissented from the decision.  From there, however, the FOMC changed its stance on policy as shown by the dovish dots chart projections. 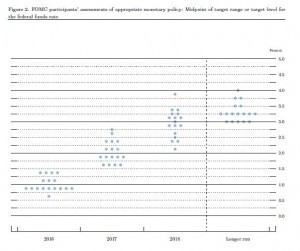 The bulk of the votes are around 0.875% for this year.  One voter is actually at 0.625%, putting only one hike on the agenda.  The average is 1.02%, meaning that two tightening moves are forecast. 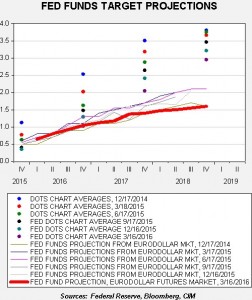 This chart shows the progression of the dots average compared to the market’s projection for policy, derived from the Eurodollar futures market.  The progression shows that the FOMC is steadily reducing its expectations for the terminal rate.  In fact, the average dot for this meeting is dead on expectations of the Eurodollar futures market, meaning the FOMC has moved its forecast year-end rate to what has already been discounted by the financial markets.  The Fed is still looking to move rates higher in the more distant years but, as the dots progression shows, it is highly likely that these expectations will probably fall as well…at least, that’s been the trend over the past several years.

We were surprised by the dovish stance of the Fed.  As we noted yesterday, inflation is clearly picking up and any Phillips Curve-based model suggests that monetary policy is getting behind the curve.  As we discussed yesterday, we were worried that Yellen would “tee up” a tightening for June.  Not only did that not happen, but the Fed actually uncorked a dovish statement. What led to this decision?  We believe it is one of three factors:

The FOMC has decided the Phillips Curve is no longer relevant.  This has been the position of Governor Brainard and Chicago FRB President Evans.  Although this is possible, recent comments from Vice Chairman Fischer suggest that he has not been swayed by this argument. 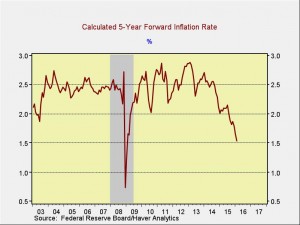 This chart shows the five-year forward implied inflation rate using the Treasury TIPS.  From 2003 through 2014, the average expected inflation rate was 2.42%.  Over the past two years, it has declined to an average of 1.94% and, as the chart shows, it is falling rapidly.  One implied goal of Fed policy is to “anchor” inflation expectations.  In the 1970s, as expectations ratcheted higher, it became harder to control inflation because the very act of expecting higher inflation induced behaviors that exacerbated it.  Thus, consumers would buy today fearing prices would be higher tomorrow, and businesses held more inventory because it rose in value with inflation and inventory accumulation acted to boost demand.  The Fed’s worry is that in an environment of falling expectations, you get the opposite behavior.  Households delay purchases because prices are not expected to rise appreciably or, perhaps, may even decline.  Businesses do everything they can to not hold stockpiles.  It appears that the FOMC will be reluctant to lift rates as long as inflation expectations are weakening.

The FOMC is reacting to foreign developments, especially actions recently taken over the past few weeks by the ECB and BOJ to engage in additional stimulus.  We were most struck by the market reaction in the dollar and gold, with the former plunging and the latter rising sharply.  Although there isn’t much history of the FOMC paying close attention to the dollar and international events except in extreme cases, it is starting to look like the Fed is viewing the behavior of foreign central banks as a form of easing.  Of course, that only occurs if the dollar strengthens, which it didn’t do yesterday.

There are some commentators arguing that some sort of deal to support the dollar came out of the last G-20 meeting.  We strongly doubt this was the case.  Instead, we believe both the BOJ and ECB eased policy with the aim of weakening their currencies.  The lack of reactions in the JPY and EUR and failures to weaken after they eased, and the reaction to the Fed, suggests to us that something more like a “currency war” is underway.  Negative interest rate policy’s (NIRP) primary stimulative effect comes from a weaker currency.  If the dollar continues to depreciate, it will be interesting to see how the BOJ and ECB will react.  If our narrative is correct, we can expect to see further aggressive easing by these central banks.

We note the Fed didn’t offer a “balance of risks” assessment, which avoided exposing the divisions on the committee.  Thus, we expect that the second and third points are probably the keys.  Inflation expectations are a concern.  Although labor markets are clearly improving, the lack of wage growth suggests something isn’t working right.  The annual wage-setting season in Japan has been very disappointing for PM Abe in that wage increases are almost non-existent and NIRP is being blamed for the lack of labor bargaining power.  There is probably some legitimate fear among the committee members that perhaps the lack of inflation expectations (see above) is bleeding into the wage-setting process in the U.S.  Foreign developments could be weighing on the committee as well.  The expected divergence in policy led to a much stronger dollar that clearly dampened Q4 economic growth.  By not raising rates and by lowering the trajectory of tightening, the retreat of the dollar is good news for the U.S. economy.  However, as we discussed above, the negative reaction of developed market equities to the Fed’s decision shows how sensitive these markets have become to currency values.

This discussion takes us to the oil market.  Oil prices jumped yesterday, in part due to a lower than expected build in crude oil inventories but also due to the aforementioned dovish Fed statement. 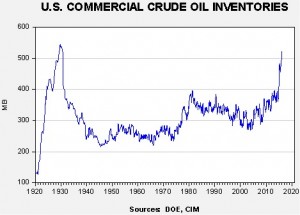 Inventories remain historically high.  Assuming the usual seasonal pattern continues, we should end up with stockpiles of around 555 mb by the end of next month. 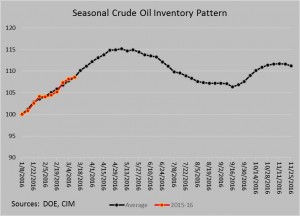 As this chart shows, we have about another six weeks before inventories peak.  Based on current oil inventories and the euro, fair value for crude oil is $36.70 per barrel.  Thus, current prices are a bit overvalued.  Assuming we continue to see normal seasonal builds, fair value by the end of April will be $31.02.  To justify current oil prices with the expected peak in stockpiles, the euro will need to strengthen to $1.155, which isn’t out of the question in light of the Fed’s behavior.