[Posted: 9:30 AM EDT] Happy Friday!  Here is what we are watching this morning:

The shakeup continues:  Numerous media sources indicate that Gen. McMasters is on his way out as National Security Director.  The most rumored replacement is John Bolton, a well-known hawk.  If Bolton does get the job, the odds increase significantly that the Iran nuclear deal gets overturned.  Bolton and Pompeo are harsh critics of the Iran deal and would support the president’s instincts to break it.  Iran’s reaction will be interesting to watch.  The pragmatists, led by President Rouhani, would be under tremendous pressure from the hardliners, who are also critical of the pact.  It all comes down to the Supreme Leader, Ayatollah Khamenei, who approved the original treaty.  We suspect he has never trusted the U.S. and would view a treaty break as just another example of American duplicity.  It is possible the Trump administration thinks it can negotiate a new deal with Iran.  Maybe he can, but it is more likely that Iran will dump the deal and rush to build a nuclear weapon.  This leads to two possible outcomes, both bad.  First, we note that the Saudi crown prince indicated that if Iran gets a nuke, the kingdom will acquire one too.[1]  Nuclear proliferation in an unsettled part of the world is not a good outcome.  Second, if Iran does “go for nuclear,” Israel would likely view this as an existential threat.  Although its first choice would be for the U.S. to fight Iran, if Netanyahu determines that isn’t going to happen he may decide to attack Iran directly.  The most likely response would be a nuclear first strike; Iran’s nuclear program is too large and dispersed to be successfully attacked with Israel’s conventional forces.  Although we are still a ways from this worst case scenario, the trends are not looking favorable.  From our standpoint, all this points to the potential for a supply disruption in the energy markets.

Cyberattacks: The Trump administration is accusing Russia of a series of cyberattacks on the U.S. and Europe that targeted key infrastructure of electric and water systems.  Apparently, this gave Russian hackers control of these systems and, if triggered, the attacks could have caused a power shutdown.[2]  The NYT[3] is also reporting that a cyberattack on a Saudi petrochemical facility appears to have been designed to cause an explosion at the plant and the only reason it didn’t work was because the undisclosed attackers made errors in their computer code.  Their errors inadvertently shut down the plant before the more deadly aim of sabotage could take place.  The West does appear to be mobilizing against Russia.  New sanctions have been announced but we will be watching for Western cyberattacks on Russia.  In the current environment, nations are engaging in belligerent acts that essentially come just short of triggering a war response.  For example, China’s militarizing shoals in the South China Sea, Russia’s annexation of Crimea, Abkhazia, South Ossetia and parts of Ukraine, undermining the democratic process in the West and cyberattacks are all elements of this “hybrid war.”  At some point, the West will need to respond.  How it responds will be important.  If a Cold War model is adopted, look for the West to try to isolate China and Russia.

More trouble for Abe: Polls show that PM Abe’s support is down to 39%, a nearly 9.5% point drop, as the land scandal will simply not go away.  Although Abe continues to indicate he won’t resign, if it becomes apparent his position is untenable the end of Abe means the end of Abenomics.  That outcome will likely bring a stronger JPY.

A couple of economy concerns: Although we don’t see signs of recession, there are some signs of slower growth. 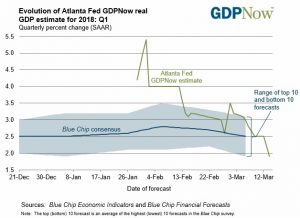 The Atlanta FRB’s GDPNow forecast for Q1 has fallen rather precipitously.  They haven’t updated their contributions to their model so we can’t yet pinpoint where the weakness is coming from, but it appears weakening consumption is weighing on growth.  Q1 GDP has had a seasonal adjustment problem; over the past four years, Q1 has been weaker than trend in three of those years.  In addition, we should see a boost in consumption as the effects of the new tax law on withholding are implemented.  Still, this drop in growth with the Fed raising rates is a worry.

In addition, the yield curve has been flattening again.

After steepening last month, the curve has rapidly flattened to nearly the lows seen in early January.  Some of this is because German Bund yields have declined.  Nevertheless, the flattening should be a signal to policymakers to exercise caution.