[Posted: 9:30 AM EDT] The Dutch elections reflected recent polling that showed declining support for Geert Wilders.  However, despite media commentary suggesting that populism has been halted on the continent, a second look suggests that it’s not quite that simple.  To recap, Wilders’s PVV party gained five seats, winning 20 out of the 150 seats in the lower house.  Mark Rutte’s VVD is the largest party, at 33 seats; however, he lost eight seats compared to the last election.  The right-wing CDA party, a traditional Christian-Democratic party, gained six seats and now has 19 seats.  The D66 party also won 19 seats, gaining seven.  It is mostly a centrist party that has one primary goal, a more direct democracy.  The Greens also did well, gaining 10 seats for a total of 14.  The Socialists, a hard-left party, lost one seat, holding 14 in the new parliament.  The big loser was Labor, which lost 29 seats for a total of nine.

Essentially, as we have seen in the U.S. and U.K., the center-left is struggling.  On the left side of the political spectrum, there is more support for harder left policies and so there was more support for the Greens and other fringe leftist parties.  The more traditional rightist parties won, to some extent, by moving to the populist right to stunt the appeal of the PVV.  This is the usual pattern; the established parties have a tendency to co-opt the ideas of emerging parties to blunt their influence.  Thus, what we see from this election is that the populist movement is being slowed as the established parties learn to incorporate the goals of the populists into the mainstream.  This may mean moderate immigration controls in the case of the Netherlands.  The likely PM Mark Rutte noted after his win that Dutch voters said “no to the wrong sort of populism,” but it’s worth noting that he didn’t see his victory as a defeat of populism.  It is quite likely that the row the Netherlands had with Turkey ended up making Rutte appear more populist as it may have helped him seem more anti-Muslim.

To have a majority government, Rutte will need to cobble together a coalition of 76 seats.  Since the PVV won’t be part of any government, the more right-wing parties, the CDA and D66, will only get him to 71 seats.  He may add the CU party, a Calvinist, socially conservative party which has five seats, but currently this party is in the official opposition.  We expect it to take several months before a government is formed.

Overall, this election likely tells us that populism is still a force in Europe but is being managed by the established parties.  That may mean some retreat on open borders and globalization but may preclude a wholesale rejection of these factors.

Although the BOJ and SNB made no changes to policy, as expected, we did get a surprise of sorts from the BOE.  Policy was left unchanged, but there was one dissent on interest rates.  One of the members called for a rate hike of 25 bps due to continued strength in the economy.  After Brexit, there was a general consensus that the economy would weaken and the British central bank would need to lower rates.  However, at least so far, it appears that Brexit hasn’t been all that negative for the U.K. and that the GBP’s decline was probably more stimulative than expected.  If the BOE is moving to raise rates, the bearish forecasts for the GBP are probably wrong and the currency could recover.

The FOMC, as expected, raised rates 25 bps.  Despite the rate hike, the wording of the statement was not materially different than the February statement.  Minneapolis FRB President Kashkari dissented, calling for no change in rates.  Finally, the worry that we may see four rate hikes this year was put to rest—the dots chart signals that the central bank is only projecting two more hikes for the year.

This is Bloomberg’s dots chart along with the median of the dots (the green line) and the Eurodollar’s expectation for fed funds.  Although the FOMC is clearly looking for more rate increases than the market in 2018 and beyond, they are quite close for this year.  The median is looking for 1.375% by year’s end, which would be the midpoint between 1.25% and 1.50%, a clear signal that only two more hikes are expected for this year.

To get a flavor for the Fed’s projections, here is the average dots projected by meeting. 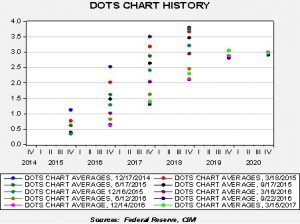 The lime green dot reflects yesterday’s data.  For this year, there is clear agreement on two more hikes.  This meeting suggests a modest increase in expectations but nothing significant.  Both this chart and the Bloomberg chart above are clearly suggesting that the terminal rate for the fed funds target is 3.00%.

If that is the terminal rate and core inflation holds around 2.00%, a case can be made that the expansion will continue. 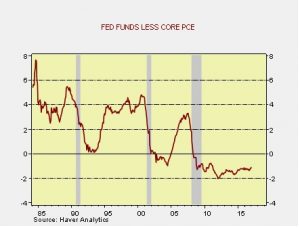 This chart shows the effective fed funds rate less core PCE.  The data is for January since the PCE hasn’t been released, but assuming core inflation remains around 1.75%, even with the 25 bps increase, the real rate is only -0.83%.  The last three business cycles ended with positive real fed funds.  Granted, we are seeing a steady cascade lower with each business cycle but, even assuming a modest decline in the “danger” rate, let’s say 2.00%, if the Fed has a core PCE of 2.00% a recession would be triggered with a fed funds target of 4.00%.  According to the dots chart, that simply may not occur.  Of course, figuring out the level of tolerance for real rates and the economy isn’t an exact science, but the U.S. economy is in deep structural trouble if a mere 1.00% real fed funds rate ends this expansion.

Clearly, the financial and commodity markets liked the news; a rally in both bonds and stocks suggests the markets feared a more hawkish central bank.  In addition to the strength in equity and debt, gold rose and the dollar dipped.  Fears that the FOMC was preparing to raise rates rapidly have been mostly quelled.  A terminal rate of 3.00% means roughly three hikes each year for 2018 and 2019.  As the dots chart suggests, the financial markets really don’t expect that to occur but the remaining two hikes for this year are fully expected.