[Posted: 9:30 AM EDT] It’s FOMC Day!  Although no change in rates is expected, we will be paying close attention to the data forecasts and the dots chart forecast of future policy rates.  As we note in the Mankiw model discussion below, unless one has concluded that the Phillips Curve is completely irrelevant, the Fed is getting behind the curve and current expectations of steady policy are becoming very difficult to justify.  There are two key issues to watch for today:

1. Will Yellen lay the groundwork for a rate hike in June?

On question #1, we think the inflation data will give a hawkish tone to the press conference and maybe even the data.  On the second question, a single dissenter (KC FRB President George) would, interestingly enough, be a good sign as it would suggest she didn’t come away from the discussion believing the Fed will certainly lift rates in April or June.  If there are no dissents, it probably means that a rate hike is being teed up and George was satisfied to wait in anticipation that rates will rise soon enough.

With today’s inflation data, we can update our versions of the Mankiw rule model.  This model attempts to determine the neutral rate for fed funds, which is a rate that is neither accommodative nor stimulative.  Mankiw’s model is a variation of the Taylor Rule.  The latter measures the neutral rate by core CPI and the difference between GDP and potential GDP, which is an estimate of slack in the economy.  Potential GDP cannot be directly observed, only estimated.  To overcome this problem, Mankiw used the unemployment rate as a proxy for economic slack.  We have created three versions of the rule, one that follows the original construction by using the unemployment rate as a measure of slack, a second that uses the employment/population ratio and a third using involuntary part-time workers as a percentage of the total labor force. 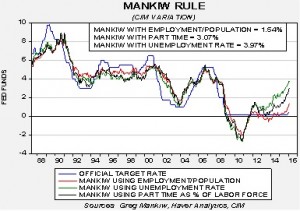 Using the unemployment rate, the neutral rate is now up to 3.97%, suggesting the FOMC is well behind the curve.  Using the employment/population ratio, the neutral rate is 1.54%, indicating that, even using the most dovish variation, the FOMC needs a rate hike of at least 100 bps to achieve neutral policy.  Finally, using involuntary part-time employment, the neutral rate is 3.07%.  The rise in the core CPI rate to 2.30% and the improving labor market are lifting all the variations’ target rates and support policy tightening.   Although we don’t expect the FOMC to move today, the rise in core CPI will raise concerns among the hawks on the board that the central bank needs to adjust rates higher.

The inflation data is leading to a rebound in short-term interest rates, which is flattening the yield curve.  We note the implied three-month LIBOR rate, two-years deferred, has jumped recently, rising back into the earlier range of interest rates. 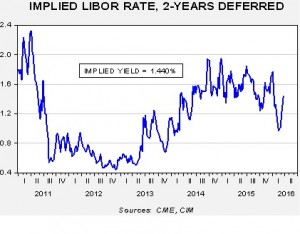 This rate, which had declined to 86 bps in February, is up just under 60 bps in five weeks.  Simply put, fears of tightening monetary policy, which had recently evaporated, are starting to return.  If this continues, a stronger dollar is likely along with weaker commodity prices and overall equities.

The National People’s Congress meetings ended today in China.  The key points are that the Xi government is planning to expand fiscal stimulation and it will be “front loaded,” meaning that most of the spending will occur in the short run.  Monetary policy will also remain accommodative.  Officials downplayed the need for CNY devaluation and seemed unconcerned about capital flight.  The bottom line is that this news is bullish for emerging market stocks and commodities in the short run, but this policy mix will most likely lead to an increase in debt in the long run.  We think China has the capacity to expand its debt load for now, but we expect the bad debt problem to increase over time and become a much bigger problem in a few years.  So, good news now, bad news later.

Oil prices are higher this morning, supported by a smaller than expected build in the API data.  We get the official data at 10:30 EDT today.  In general, the API data tends to be less reliable than the government report, so until we see the DOE data confirm the lower than expected build, the price recovery from this morning could be at risk.  However, we note that OPEC producers, along with Russia, will meet next month in a bid to freeze output and support prices.  The group has set April 17 as its meeting date.  This news may offer price support as the seasonal build season concludes later next month.  We have our doubts that Iran will agree to a production freeze and it isn’t clear whether this step will be enough to rebalance markets.  Nevertheless, we expect that the recent lows will hold and that we are likely creating a price range that should hold for the foreseeable future.