There are two big events today—the FOMC meeting ends with an expected rate hike, along with new dots and a press conference, and the Dutch go to the polls.  The key issue for the FOMC is the path of future rate hikes.  The current base expectation is two more hikes this year after today’s rate change, which would put the year-end upper level of the target at 1.50%.  It should be remembered that the Fed now has a range of 25 bps for the target rate and does vary that rate within those bounds. 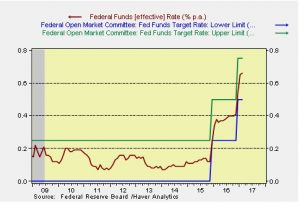 As this chart shows, most of the time the Fed keeps the rate near the mid-point of the range; assuming a hike of 25 bps today, the effective rate will likely be around 0.875%.

Another way of looking at policy is through the inflation-adjusted rate of fed funds.  The chart below looks at the effective fed funds rate less the yearly change in CPI. 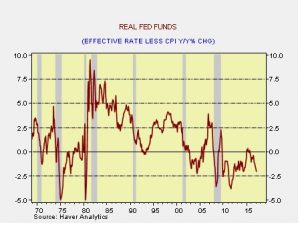 Real fed funds rose over the past two years mostly due to a decline in inflation.  As oil prices have recovered, the level of real fed funds has declined which may be prompting the move to raise rates.  Compared to the core rate, real fed funds have mostly been steady at -1.50%.  Although the Fed tends to focus on core inflation, it should be noted that inflation expectations, measured by the TIPS spread, mostly track oil prices, meaning that the FOMC may be paying closer attention to oil prices.  This might explain the decision to move in March, which was not expected until about three weeks ago.  We look for a somewhat hawkish statement and dots chart today, with Chair Yellen diluting some of this hawkishness in the press conference.

In the Netherlands, polls close at 4:00 EDT.  We expect meaningful results around three hours after the polls close.  Although Geert Wilders is getting a lot of attention, there is little chance he will be the next PM even though he will likely win the plurality of the electorate.  The Netherlands political system has numerous parties and none of them have indicated they would form a government with Wilders.  Instead, we will be watching Wilders’s performance to gauge the degree of populist support in Europe.  Recent polls have suggested some softening of support; if this trend holds, he may receive less than the 20% expected.  However, the recent weakness may reflect preference falsification, a factor seen with Brexit and in the U.S. presidential election.  If we do see evidence of preference falsification, it may mean that Le Pen in France could do better than current polls suggest.

Finally, as Secretary of State Tillerson visits Japan, there is evidence that China is continuing construction activity on islands and shoals in the South China Sea.  Candidate Trump indicated during the campaign that China was doing this due to a lack of respect for President Obama.   Continued activity suggests that China doesn’t see the change in the White House as material.  We do note that Chairman Xi and President Trump will meet in early April.  We will be watching to see if this construction activity will be part of the discussions between the two leaders.