Happy Friday the 13th!  Let’s not bury the lede—equities are enjoying a strong recovery this morning after a historic decline yesterday.  Europe is lifting as well.  As is our usual practice, we update news on COVID-19.  We also discuss how the virus crisis is rapidly revealing financial turmoil.  Here are the details:

Overall, the virus continues to spread.  The pattern that has emerged suggests the U.S. has a couple more weeks of rapidly rising cases before the growth rate begins to taper.

Financial concerns:  In this week’s Asset Allocation Weekly (AAW; see section below, p.7), we make the case that the chances of recession have increased to probably 80%.  We still haven’t seen confirmation from most of our data signals, but we expect the signals will be forthcoming.  Thus, we aren’t certain, but it is probably safe to assume that there is at least a 4/5 chance of a downturn.  What has happened here is that the economy has succumbed to three problems.  First, the disruptions from COVID-19 will weaken consumption; as we noted in our Outlook 2020 report, GDP growth has become extraordinarily dependent on consumption so it will be hard to maintain positive GDP growth under measures being taken to isolate the virus.  Second, the Saudi/Russia oil war will dampen demand in the oil patch and further weaken growth.  The third head of this hydra that has emerged is what appears to be liquidity problems in the financial system.  As the chart in the AAW shows, the Bloomberg Financial Conditions Index is at levels last seen when Bear Sterns collapsed.  Evidence of stress has been surfacing in recent days.  Spreads in the Treasury market have widened, suggesting that those holding the paper are not willing to lend it to those who need the collateral.  Credit default swap rates have soared. 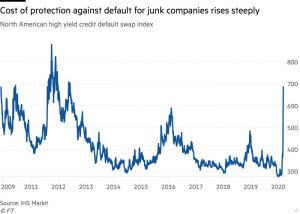 As we noted yesterday, banks are reporting that rarely tapped credit lines are suddenly being hit, suggesting corporations are facing cash shortages.  Margin calls are rising.  The need for liquidity has led to participants selling what they can, not what they should.  This phenomenon likely explains why gold prices have been falling in the face of a bear market in stocks and aggressive central bank action.  Corporate lawyers are reporting a jump in business.  We have been reporting on issues in the repo markets since September and have not seen convincing evidence that the Fed has resolved them.  So far, its actions have prevented bigger problems but not fixed the “plumbing.”  Perhaps now it will get the problem resolved.

Central banks are responding to the immediate crisis.  We had a brief respite to equity selling yesterday when the Fed announced a massive $1.5 trillion injection of liquidity to ease problems in the repo market.  The ECB responded as well, although Legarde disappointed the market, which was hoping for a “whatever it takes” approach.  Her comment of “I am not here to close rate gaps” was a rookie error.  Other central banks have moved as well.  The Bank of Canada expanded its bond-buying and repo operations.  The BOJ added liquidity ($19 billion).  The PBOC cut reserve requirements.  The Bank of Norway cut rates, and the Riksbank injected liquidity.  The BOE says it will continue to support markets.  There is action on the fiscal front as well.  The House leadership, working with Treasury Secretary Mnuchin, have put together a fiscal package.  We will be watching to see how the Senate responds.

Although today’s recovery is obviously welcome, the most likely outcome for the next several weeks is a choppy basing process. 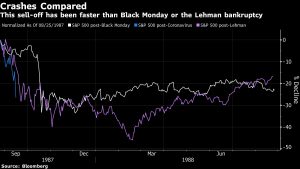 This chart shows how the S&P responded to 1987 and post-Lehman.  It suggests a long period of basing.  We discuss our views on the path of equities in this week’s AAW below.

So the bottom line is that this expansion has probably come to an end due to the combined impact of COVID-19, the oil market share war and financial fragility.

Conflict in the Middle East:  On Thursday, the U.S. conducted airstrikes against an Iran-backed militia. The airstrike was in response to a rocket attack that killed two Americans soldiers and a British service member earlier this week.  This was the first attack from the U.S. since the drone strike that killed Qassem Soleimani, and the Pentagon has warned of possible additional actions.

Putin forever:  President Putin is backing a measure that would allow him to stay in office until 2036, or until age 83.  This isn’t a huge surprise; the only suspense was how he would remain in office.