[Posted: 9:30 AM EDT] U.S. equity futures are modestly higher this morning in a quiet news environment.  Here is what we are watching this morning:

Brexit: As expected, PM May’s plan failed again;[1] although the vote was closer this time, it was nowhere close to passing.[2]  Today, Parliament votes whether to allow or prevent a hard Brexit.[3]  May is allowing Conservative MPs a “free vote,” meaning party whips won’t press members for any particular outcome.  Voting will begin at 7:00 PM GMT (3:00 EDT).  Although it is possible, there isn’t much evidence to suggest that MPs will accept an outcome that allows a hard Brexit (the economic disruption would cause a backlash among voters).  Assuming a hard Brexit option is eliminated, the next step is for a vote tomorrow to ask for an extension from the EU.  The EU has made noise that it won’t grant an extension without cause, but, in reality, the EU doesn’t want a hard Brexit either so we expect an extension will be granted.

Meanwhile, there is much drama going on behind the scenes.  There is growing talk of a second referendum.[4]  Brexiteers seem poised to bring down May and replace her with one of their own.[5]  Labour wants to do the same.  These plays at power are the most likely avenue for a chaotic exit.  So far, however, financial markets are betting that there will be an extension of the deadline and muddling will continue; the GBP is trading in a tight range awaiting some clear outcome.

Venezuela: As the country spirals into the “heart of darkness,”[6] there is one news item of note—opposition leader Guaido has indicated he would reopen Venezuela’s oil industry to foreign investment.[7]  Venezuela, unusual for an OPEC nation, welcomed foreign investment in the era before Chavez.  Chavez chased the foreigners out; as he did so, oil production steadily declined.  Guaido’s promise will be popular with developed nations but, over time, would be a serious threat to OPEC.  Saudi Arabia’s decision to take market share away from Venezuela in the late 1990s led oil prices to near $10 per barrel.  Given the current chaos in Venezuela, it would take a few years to rebuild the nation’s oil industry.  But, the longer term implications would be bearish for oil prices.

Bouteflika’s presidency nears its end: Algerian president Abdelaziz Bouteflika has postponed the April 18th elections and has indicated he won’t stand for a fifth term.[8]   Even though he has promised not to run for a fifth term, protests are continuing in a bid to oust him.[9]  So far, civil order has mostly held.  But, if the regime begins to feel threatened, a harder response and potential oil flow disruptions are possible.

The college bribery scandal: Although we don’t expect any direct market effects, at least in the near term, the bribery scandal could have important political and social effects.  Unless you have been in a news vacuum over the past 24 hours, the outline of the scandal is this: wealthy parents took a number of extreme measures to get their offspring into elite colleges.  The actions included fake athletic entries and falsified college entrance exams.[10]

The well-heeled already have advantages in the college admissions process.  Their parents probably went to college and understand the process.  The parents can pay for test tutors and multiple attempts at the exam, whereas poor kids can maybe buy or borrow a test prep book and can afford one try at the exam.  Rich kids have enriching summers, while poor kids work at menial jobs; these experiences create bias for acceptance letters.  So, even when criminal action isn’t taken, the playing field is far from even.  And, at the very wealthy levels of society, legacy admissions tied to large donations have been around for a while.  None of this is some great revelation.  However, this scandal takes the process even further, showing that some families of means are willing to resort to fraud.  So, why does this happen?

We live in an age of meritocracy.[11]  Instead of being ruled by a hereditary elite, we are now, in theory, led by the best and brightest.  If we really believed that, then the parents would recognize that their less stellar offspring probably shouldn’t take the place of a less fortunate but smarter kid at that elite college.[12]  But, in this case, natural affinities overruled good sense and the newly rich of the “best and brightest” went beyond what is already unfair to criminal to advantage their children.

Here is the social and political problem this scandal brings—the less fortunate kids in the middle who don’t get the benefits of legacy or wealth or the help of affirmative action will view this scandal as further evidence that the deck is not just unfairly stacked against them but is criminally so.  Therefore, when someone from the best and brightest class tries to explain why policies, let’s say, climate change policies, are worthy, those outside the meritocracy class will view this not as wise and well thought out policy but probably just another government action to disadvantage them further.  Meritocracy as a system can be justified but if it is delegitimized by the behavior exhibited in this scandal, then faith in those who have positions of power are undermined.  Such actions support the rise of populism.

Chinese trade: USTR Lighthizer was encouraging in his comments yesterday.[13]  And, Congress is pushing back against auto tariffs, reducing their likelihood as well.[14]  The news is supportive for equities.

Coffee bear: Coffee prices fell to their lowest level in more than a decade and supply exceeds demand.[15]  A weak BRL lowered production costs (one of the reasons a strong dollar is bearish for commodities is that most commodities are priced in dollars but production costs are in local currencies, so a stronger dollar encourages more production) which led to more tree investment that is now producing more beans.  However, the drop in wholesale prices will not lead to lower prices at the consumer level, at least not immediately.  Instead, it will boost margins for roasters.

Mankiw Rule update: The Taylor Rule is designed to calculate the neutral policy rate given core inflation and the measure of slack in the economy.  John Taylor measured slack by the difference between actual GDP and potential GDP.  The Taylor Rule assumes that the Fed should have an inflation target in its policy and should try to generate enough economic activity to maintain an economy near full utilization.  The rule will generate an estimate of the neutral policy rate; in theory, if the current fed funds target is below the calculated rate, then the central bank should raise rates.  Greg Mankiw, a former chair of the Council of Economic Advisors in the Bush White House and current Harvard professor, developed a similar measure that substitutes the unemployment rate for the difficult-to-observe potential GDP measure.

We have taken the original Mankiw rule and created three other variations.  Specifically, our model uses core CPI and either the unemployment rate, the employment/population ratio, involuntary part-time employment and yearly wage growth for non-supervisory workers.  All four models compare inflation and some measure of slack.  Here is the most recent data: 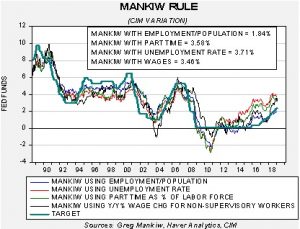 Three of the models would suggest the FOMC is well behind the curve and needs to be increasing the policy rate.  However, the employment /population ratio does suggest some slack in the economy and implies the Fed has already lifted rates more than necessary.  Until recently, the wage growth variation was also suggesting caution.  In September, it was signaling a neutral rate of 2.78%.  However, as the line shows, the projected rate has moved up sharply as wages have increased.  We suspect some of this wage increase has been mandated by various state and local increases in minimum wages.  If so, the rise in wages should slow later this year.