[Posted: 9:30 AM EDT] U.S. equity futures are flat this morning after a strong run yesterday.  Here is what we are watching this morning:

Brexit: In an 11th hour attempt to seal a deal,[1] PM May and EU Commissioner Juncker offered statements to clarify and ease the Irish backstop issue.  Although May suggested that she had secured “legally binding” assurances that the U.K. would not be forever trapped in the backstop, Geoffrey Cox, her attorney general, disagreed.[2]  In reality, if Juncker had offered something new it would have needed ratification from the 26 other members of the EU; since he didn’t ask, these “assurances” were not a real change.  Cox’s decision is probably a deal killer.  If Cox would have agreed with May’s description, his approval might have swayed Tory Brexiteers.  But, his assessment likely means that when the vote on May’s plan is held at 7:00 GMT (3:00 pm EDT) it will almost certainly be defeated.  That sets up tomorrow’s vote, which will determine whether or not there can be a hard Brexit.  We expect hard Brexit to be defeated, which means a delay in Brexit is coming; the exit could be delayed for up to a year.

When the May/Juncker agreement was announced, the GBP rallied strongly.  It has given up nearly all of its gains.

A customs workers’ strike in France, protesting the lack of French preparation for Brexit, could be a sign of how chaotic a hard Brexit would be.[3]  Trucks are reportedly backed up for miles.  Current arrangements allow for the seamless movement of goods.  After Brexit, cargos will need to be inspected.

Venezuela blackouts: The blackouts in Venezuela are continuing with no clear end in sight.[4]  The U.S. is pulling all of its embassy staff from the country.[5]  The persistent power outages are affecting oil production and exports.[6]  There are unconfirmed reports that oil production may have fallen to 0.5 mbpd; for world markets, the lack of exports means that Venezuela is no longer contributing to global supply.  Oil prices moved higher on the news.

Bouteflika’s presidency nears its end: Algerian president Abdelaziz Bouteflika has postponed the April 18 elections and has indicated he won’t stand for a fifth term.[7]  Algeria has been hit with protests against the president, who is 82 years old and incapacitated from a stroke.  It appears a caretaker government will take control of his administration until new elections are held.  Bouteflika has been in office since 1999.  The fact that it appears there will be a peaceful transition of power is remarkable and modestly bearish for oil prices (although Venezuela’s news is probably a more important factor).

Chinese trade: Chinese Vice Premier Liu discussed the text of a trade agreement with USTR Lighthizer yesterday evening.[8]  Although there is no date for a Xi-Trump trade summit, the fact that these two high-ranking officials are talking is a good sign that there are attempts at progress.

New York tax: State and city officials are considering a “pied-à-terre” tax[9] on second homes in New York City.  The city is a destination for the wealthy to purchase apartments and homes that are not their primary residence.  The tax would apply to non-primary homes worth $5.0 mm or more.  What makes this tax interesting to us is that New York residential real estate has been attractive to foreign capital flight for years.  It is unclear if the tax will be enough to deter these funds to other venues, but other cities that are also areas for capital flight, such as London, may be watching to see if the city remains a destination for capital flight after the tax is enacted.

Populism v. establishment: Since the election, we have characterized the Trump presidency as a battle between the populists and the establishment.  Trump shrewdly determined that populists, especially the right-wing variety, had perceived themselves as being shunted aside.  By running as an anti-global Jacksonian, he was able to capture that vote.  At the same time, Trump also catered to the right-wing establishment.  In governing, Trump mostly acted as an establishment figure, at least on domestic economic policy, until January 2018.  After the tax bill passed, Trump’s policies of trade impediments and border security were pure right-wing populism.

However, on foreign policy, Trump has been more consistently populist.  The establishment supports America as hegemon, which means the U.S. acts to bring global security and provides the reserve currency.  In the latter role, the U.S. is open to trade and willingly accepts a trade deficit.  It also remains open to immigration, which provides the capital-owning class an expanding (and compliant) labor force.  Trump has put up trade barriers and moved U.S. trade policy to a bilateral stance, which virtually guarantees that the U.S. will dominate every trade relationship (at the cost of undermining U.S. security projection).  Trump has also moved to restrict immigration.

The right-wing establishment has an uneasy relationship with Trump.  Although it clearly supports the tax cuts and aggressive deregulation, it would prefer the U.S. maintain the superpower role and have relaxed immigration policy.  The WP is reporting that, in a discussion with VP Pence, former VP Dick Cheney accused Trump of running a foreign policy similar to his predecessor, Barack Obama.[10]  In terms of substance, Cheney is closer to being accurate.  Trump’s unilateral decision to leave Syria is reminiscent of Obama’s hasty retreat from Iraq.  Obama’s “pivot to Asia” required a reduction in resources to the Middle East.  One of the common mistakes made in the current environment is to analyze politics from the traditional right/left, Republican/ Democrat or conservative/liberal viewpoints, but the real underlying trend, in our view, is populist/establishment.  And, it isn’t just a U.S. issue.  Europe is being riven by similar trends.  The noted exchange between Cheney and Pence is an interesting example of the populist/establishment divide.

Turkey slips into a downturn: Last year’s currency crisis in Turkey has weighed on growth and finally taken GDP into negative territory for the second consecutive quarter, which is considered a “rule of thumb” definition of recession. 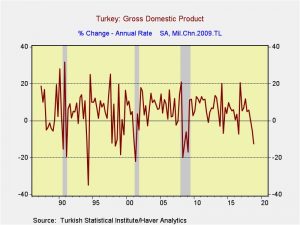 However, it wasn’t all bad news.  The drop in the TRY has led to a significant improvement in net exports, which will, over time, support the economy’s recovery.  The improvement in trade confirms that a floating exchange rate is a powerful tool to combat a downturn. 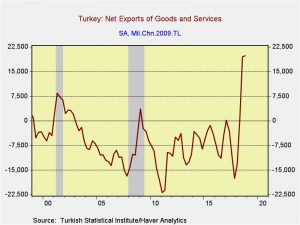