[Posted: 9:30 AM EST] After yesterday’s wild ride, risk-on has returned this morning.  Equities and the dollar are higher, while Treasuries and gold are lower.  Yesterday, the ECB far exceeded expectations with its stimulus package.  All was going according to plan after the announcement—the dollar rose, equities were higher—and then ECB President Draghi took the air out of the room by offering forward guidance that suggested yesterday’s move would be the last of the stimulus.  Within minutes, the favorable trends reversed.  However, this morning, we are seeing a return to positive sentiment.  We suspect Draghi really meant to infer that he believes the plan unveiled yesterday will be enough to reach the bank’s inflation target and additional stimulus won’t be necessary.  However, Draghi has shown he will continue to do “whatever it takes” and we suspect that he will do more if inflation fails to rise.

We are watching the USD against the JPY and EUR.  Given the drop into negative rates, one would have expected further weakness in the latter two, but so far both have held up rather well.  Although the emerging market currencies may have further to decline, we may have seen the bottom on the EUR and JPY.  If so, further stimulus from the BOJ and ECB will likely fail to generate an uptick in growth.

There were a couple of news items of note out of China.  First, February bank loans came in weaker than forecast, at CNY 727 billion, well below the CNY 1.2 trillion forecast.  Given that January loans were CNY 2.5 trillion, some pullback was expected, but the drop was larger than forecast.  With the recent cut in reserve requirements, we would expect loan growth to remain elevated.  The second item is that financial authorities are considering a policy to allow banks to swap deteriorating loans for equity.  There has been no official confirmation of the report and few details (a trial balloon, most likely).  However, media reports suggest that state-owned enterprises (SOEs) in overbuilt industries would be the likely targets.  On its face, this won’t do much.  Banks have to assign a 100% risk/capital weighting to loans, which rises to 250% once a loan begins to deteriorate.  Publicly traded equities require a weighting of 290% and unlisted equities require 370%.  The only way this makes sense is if the banks take the equity and then are allowed to sell it to new buyers (likely at a much lower price).  This may be a way for the government to shift ownership of these firms to the public, but it would also require giving up control of these entities.  We expect to see some hopeful comments in the media supporting the swap, but most likely it won’t be a big deal.

Oil prices are lifting this morning on reports from the IEA that suggest oil prices may have bottomed.  The OECD group says that falling output from both OPEC and non-OPEC producers will lead to lower supplies.  However, the IEA does not expect much relief on inventories, meaning that prices may have bottomed but a big rally might not be on tap.  We note that meetings with Russia and OPEC leaders to freeze output have not been held; in fact, they cannot agree on a place or time.  Additionally, Iran has indicated it won’t freeze production until it regains its lost market share.  We doubt OPEC will make any significant reductions in output until the Saudis decide they want to boost prices.  Although the Saudis’ financial position is deteriorating, they still have the wherewithal to deal with weaker oil prices compared to their competitors.

Yesterday, the Fed released its Financial Accounts for the United States for Q4.  Formerly known as the “Flow of Funds” report, it offers deep insight into U.S. financial conditions for government, businesses and households.  Here are a few highlights: 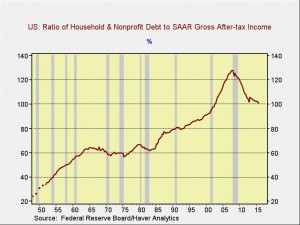 Deleveraging has pretty much stopped.  Household debt is now 101.14% of after-tax income, up modestly from 101.09% in Q3.  Households are not adding debt much faster than income, but it does appear that debt reduction is clearly ending.  In the near term, this is bullish for the economy as rising consumption is key to stronger growth. 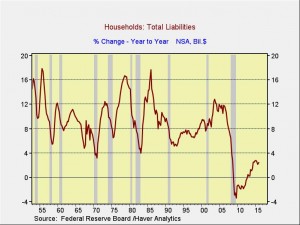 As this chart shows, debt growth is rising modestly but remains well below historical growth levels.  The lack of deleveraging is due, in part, to sluggish income growth. 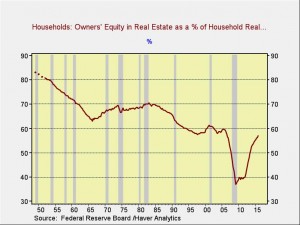 Homeowners equity in real estate creeped higher, to 56.9%in Q4 from 56.3% in Q3.   We believe that when this percentage reaches 60%, homeowners will feel that they are back to a comfortable level of equity and spending will likely rise.

Finally, net saving by sector continues to slowly move in a favorable direction.  Businesses continue to dissave, which is good for the economy.  Business saving has two detrimental effects.  First, if businesses are net savers, they are not investing their excess which usually means the economy is soft.  Second, a business sector with excess saving can invest without using the financial markets to vet the investment decision.  Thus, in a healthy economy, the business sector should be a net borrower most of the time.  Household saving rose modestly by 5 bps, government reduced its dissaving by 86 bps and the foreign sector (the mirror image of the current account deficit) reduced its saving by 7 bps. 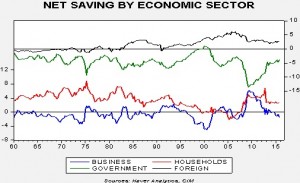