Happy Tuesday!  The markets are looking better than yesterday, largely based on signs that the White House has swung behind the idea of significant fiscal measures to offset the negative impact of the COVID-19 panic.  We update the latest news on the coronavirus and discuss prospects for the relief package.  Separately, the oil price war between Saudi Arabia and Russia is intensifying, though crude is for now being swept up in the positive sentiment about the fiscal response to the coronavirus.

COVID-19:  Official data show confirmed cases have risen to 115,855 worldwide, with 4,087 deaths and 64,046 recoveries.  In the United States, confirmed cases rose to 755, with 26 deaths and 8 recoveries.  However, the data continue to suggest the epidemic is peaking in China.  The country reported only 19 new cases today, and President Xi finally visited the epicenter of the outbreak in Wuhan and claimed “victory is near.”  That’s consistent with our view that the outbreak may follow a roughly two-to-three-month cycle when it hits a country.  With the epidemic apparently peaking in China, attention will now focus on the accelerating outbreaks in other countries.  The WHO now says the COVID-19 outbreak is “very close” to becoming a pandemic.  All the same, the two-to-three-month cycle would suggest those outbreaks could slow dramatically by late April, even if the impact on the economy and economic data extends into early summer. 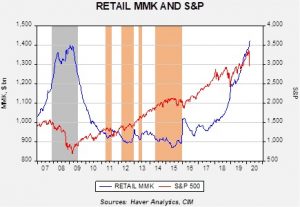 Oil Market:  In a dramatic escalation of its price war with Russia, the Saudi government said it will boost its oil supply to 12.3 million barrels per day (bpd) by next month.  That would be 2.5 million bpd above its recent supply, and 300,000 bpd above its previously declared maximum production (suggesting the Saudis will release supply out of inventory).  Russian Energy Minister Novak responded with a threat to boost Russia’s oil supply by 500,000 bpd.  By itself, the Saudi effort to inflict maximum pain on Russia and force it to agree to production cuts would be bearish for oil prices.  However, traders today are more focused on signs of fiscal measures to tackle the COVID-19 panic; thus, prices so far this morning are rebounding.

Russia:  Legislators considering President Putin’s constitutional changes, which would let him keep exercising power even after his term expires in 2024, have proposed simply resetting the country’s term limits so he could remain president potentially until at least 2036.  The proposal comes after Putin last week said he wouldn’t take the leadership of the proposed new State Council on grounds that doing so would be “destructive” for Russia.  Importantly, the pro-Putin United Russia Party said it would support the change to term limits.

United States-Iran:  The Pentagon has begun withdrawing some of the troops it sent to the Middle East after the assassination of IRGC Commander Soleimani in January.  Officials have reportedly concluded there is now less risk of Iranian reprisal strikes.  If the assessment is correct, the improved security outlook would likely be positive for global risk assets but negative for oil.

Turkey-Syria-EU:  Turkish President Erdogan began meeting with EU officials about shoring up their 2016 migrant deal, under which Turkey harbors refugees from Syria’s civil war in return for EU financial assistance.  However, there was no sign of a breakthrough that would prompt Erdogan to reverse his move last week to allow refugees to cross from Turkey into Greece.  The threat of a new European migrant crisis remains a political risk for European assets.

United States:  In what’s being called “Super Tuesday II,” primary elections are being held in six states today.  In the key Democratic Party contests, the largest number of convention delegates at stake are in Michigan and Washington.  Also voting are Missouri, Mississippi, North Dakota and Idaho.  If former Vice President Biden polls well against Vermont Sen. Bernie Sanders and his “democratic socialist” message, the results could be reassuring and positive for stocks tomorrow.