(1) The interest rate on the main refinancing operations of the Eurosystem will be decreased by 5 basis points to 0.00%, starting once the operation is settled on 16 March 2016.

(4) The monthly purchases under the asset purchase program (QE) will be expanded to €80 billion from €60 bn, starting in April.

(5) Investment grade euro-denominated bonds issued by non-bank corporations established in the euro area will be included in the list of assets that are eligible for regular purchases.  In other words, corporate bonds will now be eligible for the central bank’s asset purchase program.

(6) A new series of four targeted longer term refinancing operations (TLTRO II), each with a maturity of four years, will be launched starting in June 2016. Borrowing conditions in these operations can be as low as the interest rate on the deposit facility.  It appears that this is how banks will be supported in the face of negative interest rate policy (NIRP).  Banks will be effectively paid to lend money because the deposit rate is negative.  So, when a bank participates in the TLTRO, it borrows at -40 bps; obviously, if it just holds the cash, it earns a positive carry.  In the press conference, Draghi suggested that further cuts are not likely and noted that he doesn’t think NIRP can be extended without limit.  These comments dampen the impact of the announced policy measures by weakening the stimulative effect of the forward guidance part of policy.

Draghi faced the problem of expectations going into this meeting.  After disappointing the market in December, there was great pressure on the ECB to positively surprise the market.  At least initially, market expectations were clearly exceeded and market reactions were consistent with these unexpected actions.  Equities and related futures rose sharply.  The dollar lifted across the board.  Commodity prices eased in the face of a stronger dollar.  The U.S. Treasury curve is flattening due to expectations that the Fed is probably leaning the other way (more on this below).  European bonds rallied, especially corporates.  European credit default swaps are narrowing as well.  However, the comments suggesting that today’s move is the last and that NIRP cannot be extended without limit have led to partial reversals in the initial market reactions.  In other words, in terms of forward guidance, the ECB is suggesting that there isn’t more to come, which dampens the market impact of the announcement.

Today’s WSJ “Heard on the Street” column introduces the notion of the “Yellen call” as a foil to the concept of the “Greenspan put.”  The analogy doesn’t really work but the idea is that as the financial markets stabilize, the Fed will probably lean toward tightening policy again.  Essentially, the Fed is acting as a cap on equity prices, using stability in the financial markets to move toward its preferred policy action, which is to lift rates.

Yesterday, the DOE released its weekly inventory data.  Oil prices have continued to rise, although inventory levels are very elevated. 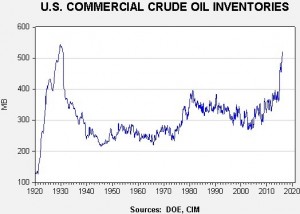 Current stockpiles are 521.9 mb, the highest since August 1930.  The seasonal build in inventories is on track to reach around 560 mb by late April. 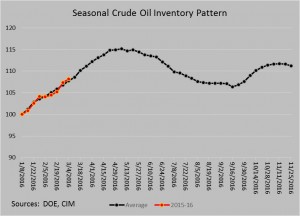 The crude oil inventory build season tends to run from early January into late April.  On this chart, we have indexed the five-year average for crude oil against the current year.  As the chart indicates, this rebuild season is closely tracking average; if that trend continues, commercial crude stocks will be near 560 mb by spring.

So, with this inventory overhang, why are prices so strong?  There are probably two explanations.  First, the market is beginning to look past the end of the rebuild season to the spring and summer driving season.  Thus, traders holding short positions are covering before the rebuild season ends.  Second, oil prices have become undervalued and have recovered to fair value. 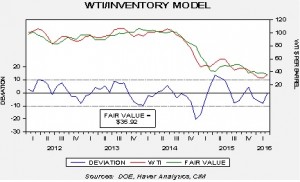 This model uses oil stockpiles and the EUR exchange rate.  It is a monthly model that uses the average WTI price and the month-end inventory level.  The fair value level for March, so far, is near $36 per barrel.  On a nearby basis, we have moved above that level after being well below it a couple of weeks ago.  Current prices are no longer cheap and further rallies may become difficult to sustain in the short run.  However, we are becoming friendlier to oil after mid-year due to falling U.S. output, improving demand and a growing need for OPEC to boost prices (see below).

Some other news items of note: