[Posted: 9:30 AM EST] It’s “Super Tuesday,” perhaps the most important date on the primary calendar.  By tomorrow morning, we should have a fairly good idea of who will be the candidates from both parties.  Polls suggest that it will be Trump versus Clinton for November.  It probably won’t be the de facto end of the primary season, but it will likely be the de jure.  If that is the outcome, both parties will have to start calibrating for the future.  For the Democrats, the left-wing rebellion started by Sen. Sanders won’t end even if he is defeated.  Sen. Clinton will struggle to convince Sanders supporters that she is anything more than the establishment standard bearer.  If she cannot bridge that gap, she will need to win with a coalition of minority voters and the establishment.  Of course, that assumes the DOJ doesn’t derail her candidacy with an indictment.  On the other hand, the GOP is facing disarray with a Trump candidacy.  The establishment of the GOP is recoiling from the choice but hasn’t been able to select a single candidate to challenge him.  It’s probably too late to stop Trump.  However, it isn’t clear if he can carry the GOP establishment and so he may try to win the presidency with a narrow Jacksonian coalition.  For the financial markets, the elections may simply be a huuge uncertainty that weighs on sentiment.

In looking at the election year cycles, we don’t have a lot of data for the current cycle (we index S&P 500 weekly closes for the first week of the election year through the four-year presidential term), but the two highest correlating years so far are 1948 and 2000.  The 1948 election was quite interesting as Harry Truman won a huge upset against Thomas Dewey.  The 2000 election was, for the most part, a fairly typical campaign, with a sitting vice president running for the Democrats against an establishment-selected former governor from a political family for the GOP.  The real fireworks in that election came after the vote when the Supreme Court effectively ended the recount in Florida and gave the victory to George W. Bush.

The data from these two elections doesn’t necessarily tell us much except that one outcome would clearly be welcomed and the other not.  Note that in both 1948 and 2000, equities rallied into the summer before the election (the x-axis shows weeks) but values weakened as the election approached.  In both cases, the second year of the election cycle featured weak equity markets, and recessions followed the election.  If a recession is in our 2017 future, these two years might be useful in suggesting that we are looking at mostly lackluster markets for the next 12 to 18 months. 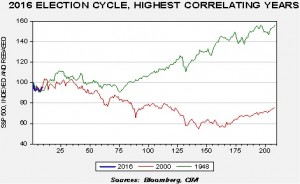 We are seeing stronger equities this morning despite rather lackluster Chinese data (see below).  China is clearly working to support its economy and we may be moving into a situation where “bad news is good news.”  Dovish comments from NY FRB President Dudley did bolster the market this morning.

We are getting a bit concerned about the market’s shift away from tighter monetary policy. 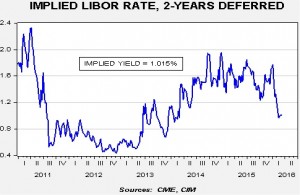 First, the deferred Eurodollar futures market continues to suggest the Fed won’t lift rates much over the next two years.  The chart below shows the implied interest rate from the two-year deferred Eurodollar futures contract.  Although the implied rate has moved modestly higher, it still stands just over 1%.  That suggests a policy rate of 74 bps two years from now, which is only one to two increases of 25 bps (since the FOMC uses a range, getting to 74 bps midpoint might take two changes).

At the same time, the yield curve is flattening, which is a concern.

The 10-year/two-year T-note spread has dropped under 100 bps, the lowest since late 2007 when the last recession began.  An inversion of this relationship would strongly suggest a recession is in the offing.

At the same time, inflation is creeping higher.  The chart below shows the yearly change in the core PCE, the Fed’s favorite inflation indicator.  Although the rate remains below the 2% target, it is approaching that level.  We don’t expect a rate hike in March but would not be surprised by increasing rate hike rhetoric as we approach the June meeting.

Overall, between the unsettling political situation and the potential for policy uncertainty, it is hard to foresee anything but a rangebound equity market into late summer.