Our Comment today opens with an update on the Russia-Ukraine war, where the big stories are an apparent Russian decision to limit its war aims and President Biden’s off-the-cuff remark suggesting President Putin should be removed from power.  We next review a range of international and U.S. developments with the potential to affect the financial markets today.  We wrap up with the latest news on the coronavirus pandemic.

Russia-Ukraine:  Militarily, the key development over the last few days has been Russia’s apparent shift in strategy toward seizing only the Donbas region in eastern Ukraine.  Since Russian forces have been fought to a stalemate elsewhere in Ukraine, reflecting both their own military errors and the Ukrainians’ unexpectedly effective resistance, they probably see such a strategy as a way to salvage what they can from their invasion.  Of course, the strategy shift doesn’t mean peace in the rest of Ukraine.  The Russian invasion forces have dug into defensive positions around the capital city of Kyiv and other urban centers, and they continue to pummel Ukrainian cities, fuel depots, and food warehouses with artillery, missiles, and aerial bombs.  There are also reports that fresh Russian troops are being massed at the border, ready to be thrown into the battle.  Even if the Russians really intend to focus on the Donbas now, they’ll have to keep up the military pressure elsewhere around the country to keep the Ukrainians from shifting their forces to the east.

China:  As we’ve argued previously, the Russia-Ukraine war will likely accelerate the trend toward deglobalization that had been in place for years.  As a result, the world economy and financial markets will likely break up into a U.S.-led bloc, a Chinese-led bloc, and many countries trying to remain unaligned or attempting to play one bloc off the other.

China-Hong Kong:  Municipal Chief Executive Carrie Lam, whose current five-year term ends on June 30, hinted yesterday that she may not seek re-election.  When asked in a press conference if she would take responsibility for Hong Kong’s vast new wave of coronavirus infections, Lam merely said it would be up to the next administration to conduct a full investigation into the city’s handling of the pandemic.  She offered herself as an adviser to any such investigation.

Middle East Politics:  Following many Arab states’ recognition of Israel in recent years, foreign ministers from the U.S., Israel, Egypt, Bahrain, Morocco, and the United Arab Emirates have begun an unprecedented meeting on Israeli soil in which they will discuss how to strengthen their cooperation in confronting Iran.  The meeting could set the direction of a continued mutual effort to maintain peace and the security of energy supplies from the region.

Japan:  Faced with an unwanted rise in bond yields, the Bank of Japan today said it would buy an unlimited number of 10-year Japanese government bonds at a set yield.  The move aims to demonstrate the central bank’s commitment to its strategy of yield curve control, under which it promises to keep the yield on 10-year JGBs “around 0%.”  In response, the yen dropped sharply to low as ¥124/dollar so far today, its weakest level since 2015. 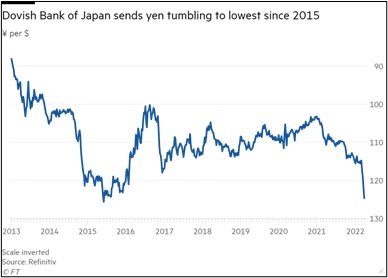 U.S. Monetary Policy:  Shorter-term bonds continue to lose value amid growing concerns that the Federal Reserve will turn to aggressive, 50-basis-point interest rate hikes to help bring down inflation.  As of this writing, the yield on the 2-year Treasury note has risen to approximately 2.32%, only about 15 basis points below the 10-year note’s 2.47%.

U.S. Fiscal Policy:  The Biden administration today plans to release its proposed budget for the federal fiscal year beginning October 1.  The proposal reportedly forecasts the cumulative budget deficit over the coming decade will be $1 trillion lower than previously expected, in part because of fast economic growth touched off by the administration’s pandemic-relief spending and in part because of a proposed new wealth tax on the super-rich.