Our Comment today opens with an update on the Russia-Ukraine war, where the Battle of Mariupol is intensifying.  We next review a range of international and U.S. developments with the potential to affect the financial markets today.  We wrap up with the latest news on the coronavirus pandemic.

Russia-Ukraine:  Even though the Russian invasion force has been fought to a standstill in most of Ukraine, it managed to break into the southeastern port city of Mariupol on Saturday.  The Russian military issued an ultimatum for the city’s defenders to surrender by 5:00 am local time today, but Ukraine has rejected it.  The latest reports indicate there is currently fierce urban fighting in the city.  Meanwhile, on the diplomatic front, President Biden will hold a video conference today with the leaders of Germany, France, Italy, and Britain, before attending a NATO summit in Brussels on Wednesday, participating in a European Council summit on Thursday, and traveling to Poland on Friday. 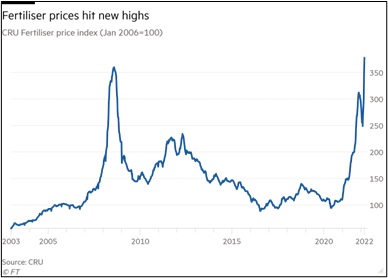 Germany-Qatar:  In a visit to Doha yesterday, German Economy Minister Robert Habeck reached an agreement with the Qatari government on a long-term natural gas supply deal to reduce Germany’s reliance on Russian gas in the wake of the Ukraine war.

United Kingdom:  In what could be another major move toward European energy security, Prime Minister Johnson will lay out a plan to boost Britain’s nuclear energy capacity by as much as fivefold by 2050.  The plan would imply the construction of at least half a dozen big new stations over the next 25 years.  Coupled with other European countries’ new focus on energy independence, Johnson’s plan underscores our optimism toward uranium and other aspects of the nuclear industry.

China:  The Hong Kong stock market has suspended trading in the shares of highly indebted property developer Evergrande (3333 HK, HKD,  1.65), pending a release of information from the company that could shed light on its restructuring and the fate of international investors.

U.S. Monetary Policy:  After dissenting to the Fed’s decision last week to hike its benchmark interest-rate target by 0.25%, in favor of a larger hike of 0.50%, St. Louis FRB President Bullard said on Friday that the Fed should boost rates all the way to 3.00% this year to avoid losing credibility regarding its commitment to fighting inflation.  In contrast, the Fed policymakers’ economic projects released at last week’s meeting called for hiking the benchmark rate to about 1.90% by the end of 2022.

United States-Saudi Arabia:  In an apparent effort by President Biden to spur cooperation in bringing down energy prices, his administration has transferred a significant number of Patriot antimissile interceptors to Saudi Arabia, fulfilling Riyadh’s urgent request for resupply to fend off drone and missile attacks by Iran-backed Houthi rebels in neighboring Yemen.

U.S. Energy Industry:  Amid high energy prices sparked by rebounding demand and supply concerns related to the Russia-Ukraine war, the number of active U.S. oil rigs has grown by roughly one-fifth in the past six months.  However, much of the new activity is to make up for a depleted inventory of wells drilled before the pandemic and isn’t expected to increase overall output enough to bring down prices significantly.

U.S. Ports:  As we’ve been warning, the tight labor market and this summer’s expiration of the West Coast longshoremen’s labor contract raises the prospect of a strike that would further disrupt supply chains and boost inflation.  To avoid the potential disruptions, some shippers are reportedly pulling forward their holiday-season orders to get them into domestic networks early, and many are diverting cargo that normally moves through the West Coast to East Coast and Gulf Coast ports.

Global Semiconductor Industry:  Even as the Fed and other central banks try to bring down inflation, the Russia-Ukraine war and other supply shocks promise to keep prices high.  The latest bad news on that front comes from ASML (ASML, USD, 679.86), the Dutch maker of lithography machines needed to produce the most advanced chips.  According to CEO Peter Wennink, it will be another two years before the company can produce all the chipmaking machines required by semiconductor firms to meet their customers’ demands.