Our Comment today opens with an update on the Russia-Ukraine war, in which Russia appears to be ratcheting up its attacks on civilians.  We next review a range of international and U.S. developments that have the potential to affect the financial markets today.  We wrap up with the latest on the coronavirus pandemic.

Russia-Ukraine:  As the Russian army continues to face obstacles to its military objectives, we see increasing evidence that it has shifted its focus toward attacks on Ukraine’s civilian infrastructure and population in order to create mass terror.  For example, it killed multiple civilians yesterday in a missile attack on Kyiv’s main television antenna, and today it has stepped up a fierce aerial assault on Kharkiv, Ukraine’s second-biggest city.  Russia has also claimed that it has taken control of the key southeastern city of Kherson, although Ukrainian officials have denied that.  Meanwhile, Russian and Ukrainian representatives plan to meet again this afternoon on the Belarusian border to discuss peace, although we have seen no indications that would suggest those talks will be successful.  To put added economic pressure on Russia, President Biden said in his State of the Union address last night that the U.S. will join with the EU in banning Russian planes from its airspace.  Western companies also continue to announce they are ending or cutting back their business dealings in Russia, but in an effort to stop that, the Russian government said it would temporarily ban foreign firms from selling their assets in the country. 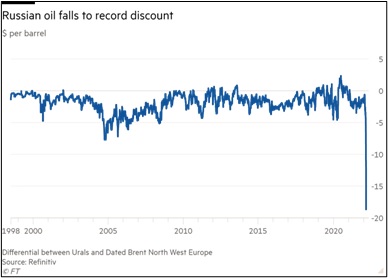 Hong Kong:  As a reminder that China is also flexing its authoritarian muscles, though not as brutally as Russia, former Hong Kong Bar Association President Paul Harris has left the city abruptly after being questioned by national security police.  Harris had become a target for pro-Beijing politicians and state-run media, who accused him of being “anti-China” for suggesting changes to the new national security law imposed on Hong Kong by China.  The sudden departure of Harris has raised concern about a new crackdown on political dissent within the city’s legal profession.

United States-China:  In its annual trade policy agenda, the Office of the U.S. Trade Representative said it would focus on a “holistic and pragmatic” approach to U.S.-China relations in order to achieve long-term benefits for American workers.  Separately, administration officials said the White House would soon announce a series of measures to confront China on its industrial subsidies and protect America’s edge in new technologies.

U.S. Politics:  In his State of the Union address last night, President Biden not only called for unity on the Russia-Ukraine war and the need to keep opposing President Putin, but he also hinted that the coronavirus pandemic could be coming to an end.  He pledged to combat rising prices by boosting domestic production of automobiles and semiconductors and rebuilding the nation’s roads and bridges.  Biden also called on Congress to work with him on priorities that were part of his stalled “Build Back Better” plan—though he no longer uses that term—including cutting the cost of prescription drugs, reducing energy costs, and lowering the cost of childcare.

U.S. Monetary Policy:  In testimony to be delivered to Congress today and tomorrow, Federal Reserve Chair Powell will argue that it would be appropriate for the central bank to raise its benchmark interest rate at its meeting in two weeks because of high inflation, strong economic demand, and a tight labor market.  In contrast, he’ll say it is too soon to tell how Russia’s invasion of Ukraine and the strict economic curbs imposed by the West against Moscow would influence the U.S. economy.