[Posted: 9:30 AM EDT] In Britain, Theresa May’s decision to call a snap election in order to win a larger mandate backfired last night.  The Tories, who were supposed to win more seats, lost their majority and barely squeaked out a plurality.  Final results show that the Tories lost 12 seats, falling to 318 in Parliament, and their rivals in the Labour Party won 31 seats, increasing their total to 261.  This outcome is seen as a stunning loss for the Tories who now need the help of a minority party in order to secure the additional eight seats needed to form a government.  As of right now, the Democratic Unionist Party (DUP), a party from Northern Ireland that won 10 seats, is likely to help the Tories form a government but will not form a coalition.  Despite the market’s negative reaction, there is growing sentiment that the election has possibly paved a way for a “soft” Brexit.  The voting results suggest that May’s insistence that “no deal is better than a bad deal” may have hurt the Tories in anti-Brexit strongholds such as London.  In the event that May fails to form a government, Jeremy Corbyn, leader of the Labour Party, will likely have to make concessions to the DUP (10 seats),  Liberal Democrats (12 seats) and the Sottish National Party (35 seats) in order to form a government, all of whom are strongly in favor of a “soft” Brexit.  That being said, May is expected to retain her role as prime minister as Brexit negotiations begin in 10 days, but it is unclear whether she will be able to retain her role as party leader in the long term.  The GBP is currently down 147 bps relative to the dollar from the prior close.

Yesterday’s testimony by former FBI Director Comey is being spun furiously by both sides.  Our take is that it’s damaging but not fatal.  It doesn’t appear that there is a clear case of obstruction.  Comey’s decision to leak is normal for Washington but it does taint his image.  Former AG Lynch came off badly.  For the financial markets, probably the best model to think about this issue is not Watergate, but Whitewater.  There may not be much here, but the administration’s handling of the issue keeps leading to concern that “something” is being covered up.  That means the special investigation will continue for months, if not years, and will be a distraction for the administration.  If they are going to have any legislative success, they need to figure out how to manage this distraction.

Yesterday, the Federal Reserve issued its Financial Accounts of the U.S. for Q1, otherwise known as the “Flow of Funds” report.  It offers a plethora of useful and interesting data about the economy and the health of important sectors of the economy.  The charts below show a few of our favorites.

The chart below shows net worth as a percentage of after-tax income.  It has reached a new record high as financial assets rise and housing prices recover. 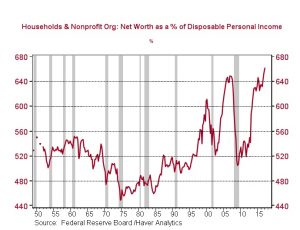 Deleveraging has slowed, but we are still seeing households lower their debt levels relative to after-tax income. 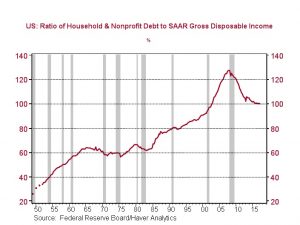 We are seeing a steady healing of the real estate sector.  Owners’ equity in real estate continues to approach 60%, which history would suggest is “normal.”  In other words, as we approach this level, we could see homeowners and potential buyers view home buying as a less risky activity.  If so, we could see a boost in homebuilding that would help the economy. 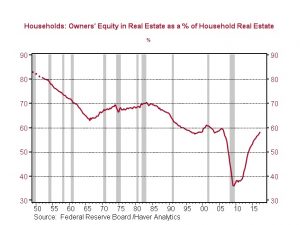 The Flow of Funds report also publishes national income data.  Labor picked up modestly in Q1 but its share remains depressed.  The steady loss of share is likely a factor in the rise of political populism. 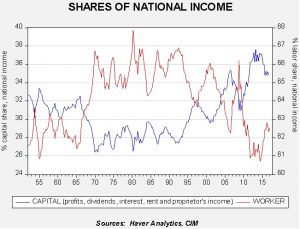 Rental income reached a new high, one of the factors that has made real estate investments attractive. 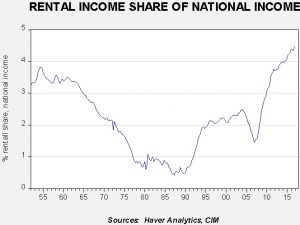 Our last chart examines the income from interest and dividends. 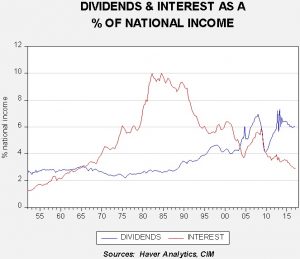 Dividends are currently about 6% of national income, with interest income under 3%.  The last time we had dividends consistently exceeding interest income was in the 1950s and early 1960s, a period of financial repression.  This chart portrays investor preference of income-producing equities.