[Posted: 9:30 AM EDT] Financial markets are in the midst of a quiet rally as the S&P challenges the high end of the recent range.  Oil is up and the dollar is down.  Here is what we are following this morning:

BREAKING: The Trump administration and ZTE (0763 HKD, 25.60) have reached an agreement.[1]  We expect details to emerge in the coming hours but the agreement will help in ongoing trade negotiations with China.

G-7: President Trump will be facing a hostile group this weekend[2]; in fact, reports indicate he may prefer not to go.[3]  The president has already had difficult conversations with Canada’s PM Trudeau.[4]  The real issue on trade is that the U.S. is changing its trade policy with the world.  America’s Cold War trade policy was designed to bolster Free World economic recovery and growth and, to do so, the U.S. had open markets that provided a steady source of demand for foreign nations.  The dollar was the reserve currency and nations were able to acquire dollars for trade purposes.  In return, the Free World followed U.S. lead on security policy.  Access to the U.S. consumer was the incentive that allowed the U.S. to ensure compliance with policies designed for the containment of communism.

After the Cold War ended, the policies continued.  The benefits to the U.S. economy were a plethora of low cost goods that help contain inflation and, consequently, low interest rates.  The costs are job loss and higher inequality.  The American public is making it clear it no longer believes the benefits outweigh the costs.  Consequently, the Trump administration is breaking the Cold War-era arrangement; what the end point looks like, however, is unclear.

One likely outcome is that the U.S. will find it more difficult to control allies.  If they are no longer able to freely export to the U.S. and are forced to restructure their economies (and are required to pay more for their own defense) then they will likely also want to go their own direction on foreign and security policy.  Globalization requires a hegemon that provides a reserve currency and suffers persistent trade deficits.  If the U.S. decides it is no longer willing to provide these global public goods then the outcome is regional wars, less trade, higher inflation but more employment (at least in the U.S.—that may not necessarily be the case abroad).  What is making the rest of the world upset is that the U.S. is unilaterally changing the structure of the global economy[5]; although world leaders aren’t happy, there isn’t much they can do about it but adapt.

EU wants exemptions on Iran: As we noted yesterday, the EU is asking the administration for exemptions on Iran sanctions.[6]  We doubt that will happen.  The Trump administration is signaling it wants to tighten controls on Iran to renegotiate a new nuclear deal that would include reducing Iran’s influence in the region.  We would not bank on the EU getting any relief on this issue.

Fed news: Richard Clarida and Michelle Bowman will have their confirmation votes on Tuesday next week.  We would be shocked if they don’t breeze through and become the newest members of the FOMC.  In comments to questions, Clarida hinted that he believes there is still slack in the economy which would argue he could lean dovish.[7]  Bowman will fill the community banker slot of the FOMC that traditionally votes with the chair on policy.

We note that the real policy rate is about to turn positive.

In fact, at the next hike, the real rate will likely move above zero for the first time since April 2008.  As we cross this point,[8] expect divisions on the FOMC to develop as the more dovish members will argue that pauses in the rate hike cycle will be justified as stimulus is being withdrawn.  Any hint of a slowdown in hikes will likely be bullish for equities and bearish for the dollar. 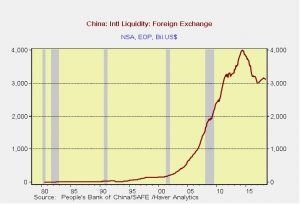 As the seasonal chart below shows, inventories are usually starting their seasonal decline this time of year.  This week’s rise is inconsistent with that pattern.  In fact, if we had followed the normal seasonal pattern since early May, inventories should be down to 455.9 mb; we are currently about 12 mb higher than the seasonal pattern would suggest.  It is possible that the old pattern shown below was due in part to the legal restrictions on oil exports.  When refiners cut runs for seasonal maintenance oil inventories would rise because the oil had nowhere to go, and oil inventories fell once refiners returned to full production.  With exports, when refiners go into maintenance the excess oil would be exported.  Exports fall when refiners come back from maintenance, keeping inventories stable.

It’s still a bit early in the process to see if this is occurring.  It didn’t happen last year.  But this year, we did see exports rise in April and early May.  Another factor is the continued increase in U.S. production.  U.S. production reached 10.8 mbpd last week, up nearly 1.3 mbpd since the beginning of the year.  And so, even with rising refining activity and elevated exports, inventories can’t fall because output is too strong.

Based on inventories alone, oil prices are overvalued with the fair value price of $62.24.  Meanwhile, the EUR/WTI model generates a fair value of $61.39.  Together (which is a more sound methodology), fair value is $61.20, meaning that current prices are above fair value even with the recent pullback.  Although we have seen prices decline in recent weeks, we are still above fair value because of rising geopolitical risk.  Oil prices will likely remain under pressure until the dollar weakens or inventories decline.

OPEC meets on June 22.  There are growing concerns that the meeting could be acrimonious[9] as Russia and Saudi Arabia are leaning toward increasing production while other members would prefer higher prices.  Since most other members lack excess capacity, falling prices are a net loss to them whereas Russia and Saudi Arabia can at least offset the lower prices with higher output.  Although there is talk of a 1.0 mbpd increase in output, we would look for a compromise that leads to a smaller increase in quotas.  If we are correct, prices would likely rise.