[Posted: 9:30 AM EDT] In Iran, a gunman and suicide bomber attacked the Iranian parliament and the Ayatollah Rullah Khomeini shrine.  The Sunni-led group ISIS has claimed responsibility for both attacks, its first significant attack in Iran, which is majority Shiite.  According to the Iranian news media, previous attempts have been thwarted over the past three years.  These attacks have raised fears that the ongoing sectarian violence may spread throughout the Middle East.  If conflict persists, we expect oil prices to rise as conflicts in the region typically disrupt oil production.  As of this morning, oil has been trading lower than the previous day’s close as the U.S. has increased oil exports.

In a morning tweet, Trump announced that he has nominated Attorney General Christopher Wary for FBI director.  Wary had previously worked as the assistant attorney general under the Bush administration.  This announcement comes a day before former FBI Director Comey’s testimony, and amidst a number of headlines regarding Trump’s contentious relationship with AG Sessions.  It would seem prudent to simply wait for Comey to testify but the comments will be the focus of the media come Thursday.  So far, equity markets are mostly shrugging off the news as it is widely believed that Comey will stop short of saying that Trump tried to obstruct justice.  It is worth noting that the dollar has been weakening and Treasuries have been showing price strength; gold has also been stronger.  There are some concerns in the financial markets but the attention has been outside the equity space.

Bloomberg reports that the ECB is considering downgrading its inflation outlook through 2019 and slightly revising its GDP forecast higher.  The downgrade is due to pessimism as to whether energy prices will rise in the future.  Despite Eurozone strength, the ECB is likely to remain dovish for the foreseeable future.  This report comes a day before the ECB is due to hold its policy meeting.  Currently, the euro has fallen 54 bps relative to the USD.

Yesterday, the JOLTS report showed a surge in job openings and only modest hiring.  The chart below illustrates the odd behavior of the labor markets. 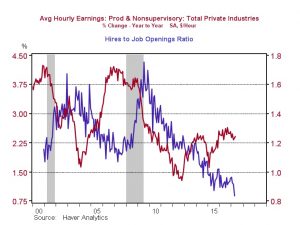 The blue line on the chart shows the ratio of hires to openings; when the ratio is below one, it means there are more openings than hires and would suggest a tight labor market.  The JOLTS report doesn’t have a long history but the ratio has never been this low.  Note that the previous business cycle low, in 2006, led to wage growth of 4%.  It is shocking that labor markets can seem to be this tight and wage growth remain subdued.  It may be that labor fears of being substituted for machines or the huge pool of discouraged workers are keeping wage growth low, but, clearly, firms are looking for workers and struggling to fill positions.  Basic economic theory would suggest that if demand is this strong, the price of labor should rise unless the supply curve is perfectly flat; if that were the case, the openings would be filled.  This gap will likely encourage the FOMC that the proper course for monetary policy is to tighten further.