[Posted: 9:30 AM EDT] Chair Yellen’s speech yesterday was about as we expected; she didn’t say too much and did work hard to give her and the FOMC ample space to raise or not raise rates.  She did paint a view of the economy that was reasonably upbeat but also noted a series of concerns that she was watching.  Overall, the tone really hasn’t changed—the Fed wants to move rates higher but is being very cautious.   The good news is that the financial markets took the comments in stride and we are seeing stronger equity markets again this morning.

Of course, part of the reason the financial markets are better this morning is that we have seen a dovish shift in the fed funds futures.  There is now a 0% chance of a rate hike later this month and the markets don’t have the odds of a hike exceeding 50% until the December meeting.  We are not sure this degree of dovishness is reasonable in light of yesterday’s talk.  On the other hand, given how volatile this year’s election season could be, it is really hard to fathom the Fed injecting itself into that mess by changing policy in autumn.  Thus, we tend to agree that, barring some inflation shock, July is probably the last chance to change policy before the election cycle goes into full swing.  And, we doubt the data will improve that much in such a short amount of time to trigger a rate change.

China’s foreign reserves dipped by $28 bn to $3.19 trillion last month.  That was near expectations.  The stronger dollar weighed on China’s reserves, in that any reserves held in JPY or EUR reduced the dollar level of reserves.  The key takeaway is that China has managed to stabilize its currency without spending a lot out of reserves to stabilize it.  Thus, this is good news for China.

The U.S. and China are holding semiannual talks at the U.S.-China Strategic and Economic Dialogue meetings this week.  Treasury Secretary Lew suggested yesterday that China needed to reduce its industrial capacity because its production of industrial metals was overwhelming global markets.  China pushed back today, suggesting that the U.S. and the world cheered China’s expansion of capacity after the 2008 downturn as a way to boost global growth.  We suspect that the leaders of both nations are posturing.  China knows it needs to reduce its capacity; it doesn’t know how do to that without causing unemployment.  One trip through the U.S. rust belt makes it evident just how painful reducing capacity is in real life.  Chinese officials are grappling with the political and social fallout from cutting capacity and certainly don’t want it to look like the U.S. is pressing China to make such painful moves.  On the other hand, China’s pattern has been to talk about doing the right things but avoiding the pain once the policy change starts.  The U.S.  fear is that China is more likely to maintain the capacity and keep dumping goods on global markets, leading to global deflation.  We tend to expect that dumping is the more likely outcome and trade barriers are the most likely response.

With last week’s employment data, we can tentatively update our versions of the Mankiw rule model.  This model attempts to determine the neutral rate for fed funds, which is a rate that is neither accommodative nor stimulative.  Mankiw’s model is a variation of the Taylor Rule.  The latter measures the neutral rate by core CPI and the difference between GDP and potential GDP, which is an estimate of slack in the economy.  The latter number cannot be directly observed, only estimated.  To overcome the problem of potential GDP, Mankiw used the unemployment rate as a proxy for economic slack.  We have created three versions of the rule, one that follows the original construction by using the unemployment rate, a second that uses the employment/population ratio and a third using involuntary part-time workers as a percent of the total labor force as a measure of slack. 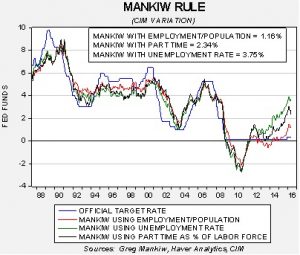