Happy National Drive-In Movie Day!  And kudos to our favorite outdoor movie theater, the Skyway Drive-In in Fish Creek, WI.[1]  Here is what we are watching this morning:

ECB tightening?  Peter Praet, the ECB’s chief economist, indicated today that policymakers would be taking a hard look at the central bank’s balance sheet, with the intent of beginning the end of additional central bank bond buying.[2]  German Bund yields jumped over 5 bps and Italian bonds rose nearly 15 bps on the news.  The EUR lifted on the news as well.  Praet delivered an upbeat economic message that was seconded by Bundesbank President Jens Weidmann.  This looks to us like the hawks are beginning to circle.  We would not be surprised to see the ECB lay out the end of balance sheet expansion later this year.

Iran: Although European leaders are trying to keep the Iran deal together, the threat of U.S. sanctions appears to be thwarting their plans.[3]  The European Investment Bank (EIB), which raises much of its funding in the U.S., is indicating it won’t cooperate with EU sanctions avoidance.[4]  The EIB is a lender that funds projects that foster European unity; many of its loans go to fund public transportation in the EU.  The EIB fears that the bank’s funding in the U.S. will dry up if it cooperates with the EU on busting Iranian sanctions.  Meanwhile, Iran is taking steps to resume uranium enrichment that are undermining the agreement as well.[5]  Israeli PM Netanyahu is touring Europe this week, pressing various European nations to follow the U.S. lead and jettison the nuclear deal.[6]  However, the “hammer” of any sanctions regime is the S.W.I.F.T. network, which is the backbone of interbank communications.[7]  The leadership of this organization, set in Brussels, fears that the continued weaponization of the network will lead rogue nations to create their own communication network, perhaps adopting a blockchain to avoid S.W.I.F.T.

Venezuela threatening force majeure: Due to falling oil production and logistical problems, Venezuela may be unable to meet its contractual agreements for oil sales.[8]  Oil prices have not risen despite this news as traders are more concerned about rising OPEC production rather than offsetting the loss of Venezuelan and potentially Iranian crude oil.

No NAFTA—two deals?  Larry Kudlow, the White House National Economic Council director, suggested yesterday that the U.S. may prefer to negotiate separate trade deals with Canada and Mexico.[9]  It appears less likely that a deal will occur before Mexican elections in early July; if current polls are accurate, AMLO, a populist, will become the next Mexican president.  He has been running on an anti-Trump platform and it is unlikely a NAFTA deal would be possible if he wins.  Thus, the idea of bilateral agreements might be the only feasible solution.  We note that Mexico has retaliated rather strongly to American steel and aluminum tariffs.[10]

Facebook again?  Facebook (FB, 192.94) continues to face a steady drip of difficult revelations.  The latest is that the company gave data access to several Chinese electronic companies, including Huawei (002502, CNY 5.82), a company suspected by U.S. intelligence agencies of inappropriate activity.[11]  This latest revelation is part of a broad public relations problem for the company.  Given the prominence of the so-called “FAANG” stocks, there is concern that the company’s problems could prompt a regulatory backlash and affect the broader equity market.

Bank of India: Yesterday, we reported that the Bank of India asked the Fed to slow its policy tightening after emerging markets have seen growing pressure.[12]  Today, the bank surprised the financial markets by raising interest rates for the first time since 2014.[13]  The Reserve Bank of India is just the latest policy tightening seen in the emerging markets, following Indonesia, Argentina and Turkey in raising rates.  These actions are due, in part, to tighter U.S. monetary policy.

A historic chart: Yesterday, the JOLTS report shows that there were more job openings in April than unemployed people.  This is the first time in the history of the JOLTS series (which began in 2000) that labor markets have been this tight. 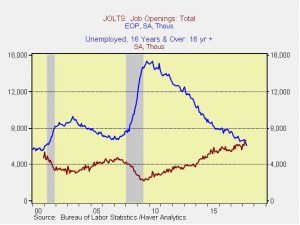