[Posted: 9:30 AM EDT] Although there has been some market uncertainty due to political risks in the U.S. and U.K., the overnight news was relatively quiet.  Market jitters seem to be due to concerns that tax and healthcare reforms have stalled, doubts as to whether Theresa May will be able to pull off a decisive win in Thursday’s election and the Middle East’s isolation of Qatar.

Today, President Trump is meeting with congressional GOP members to get an update on healthcare and tax reform.  Republicans have been reluctant to put the bill to a vote without receiving any support from Democrats.  The Russian investigation and the travel ban have made Democrats hesitant to support any initiatives promoted by the Trump administration.  It is believed that President Trump would like healthcare reform put to a vote by summer and tax reform by fall.  Former FBI Director James Comey could possibly play a role in ensuring that Congress is able to meet this deadline, assuming his testimony doesn’t further implicate President Trump in the Russian investigation.  Congress has about 80 days left to pass legislation for this congressional session.

In the wake of the London Bridge attack, Theresa May has faced calls that she should resign as prime minister.  While serving as home secretary, May agreed to cut the police budget by 18% which is believed to have contributed to a drastic reduction in the police force.  Her opponents suggest that had the police budget not been cut, the attack could have been prevented.  Although this assumption is probably baseless, it is likely to resonate with many Brexit supporters.  May’s fondness for ambivalence suggests that these critiques will force her to pivot toward a harder stance with the EU.[1]  A hard Brexit would heighten uncertainty for businesses located in the U.K., hence we are bearish on the GBP.  That being said, polls still suggest that May’s party should win in Thursday’s election.

Qatar remains at odds with its neighbors, but a bit more interesting information has emerged.  According to the FT,[2] what has angered the rest of the Gulf Cooperation Council (GCC) states is that Qatar paid up to $1.0 bn to jihadist groups linked to al Qaeda and Iranian militants, in part to secure the release of a group of Royal Family falconers who were kidnapped in Iraq on a hunting trip.  Qatar has been accused by the GCC of funding various militant groups, perhaps to ensure these groups don’t attack Qatar.  According to reports, these payoffs were so egregious that they prompted the recent harsh measures taken by the GCC.  We suspect this will be a temporary event, but if the embargo evolves into a blockade, a military conflict could emerge.  It will be interesting to see how Iran would manage such an event.

The contributions to growth suggest that one percent of the growth is coming from inventory accumulation. 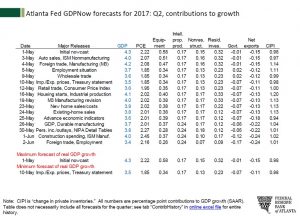 Consumption has remained rather steady and this forecast doesn’t include the recent employment data.  We are concerned about the softer residential investment and weak government spending but, overall, the data for Q2 suggests a good recovery, at least so far, and should lift H1 growth levels.  At the same time, this solid data should support the FOMC in raising rates on the 14th.  Fed funds futures put the odds of a rate hike at the next meeting at just above 90%.  Interestingly, the odds of a hike in September remain around 35%, while we see a greater than 50% chance of a third hike this year at the December meeting.

[1] The Economist has nicknamed her “Theresa Maybe.”