[Posted: 9:30 AM EDT] Good morning!  It’s the 30th anniversary of the Tiananmen Square crackdown.  President Trump’s visit to the U.K. continues today.  We are seeing a bit of risk-on this morning as equities make a modest recovery.  Here is what we are watching today:

Fed meets in Chicago: The Federal Reserve is holding a conference in Chicago today and tomorrow to discuss the inflation target.  Members of the FOMC have expressed concerns for some time about the target and how it is interpreted by the market.  For the most part, it has evolved into a 2% ceiling on price changes; although this target is clearly workable, the Fed wants to avoid, at all costs, being boxed in to a policy that it might not want to adopt.  This has always been the argument against rules-based policy.  For years, economists have argued that the Fed could put policy on a sort of autopilot where the model would generate the “correct” policy rate depending on whether a certain combination of factors exist.  The benefits of such a program would be certainty; we would always know what the policy rate would be going forward.  The downside is that unexpected conditions could develop that were not in place when the model was created and force policymakers into rate adjustments that may be inappropriate.

Policymakers have become increasingly concerned that the perception of the 2% ceiling on inflation may not be appropriate and are considering making changes to the inflation bogey to give themselves more flexibility.  There are several potential adjustments being considered.  We suspect that none will be decided upon at this meeting but the groundwork will likely be laid for an adjustment.  The bottom line is that the Fed wants an inflation target that is less rigid but still provides a guideline for the markets to follow.

Weakening global growth: We are seeing reports from the transportation sector suggesting the global economy is coming under pressure.  Additionally, the global PMI index has dipped under the 50 expansion line.  Weaker global growth will add to pressure on U.S. policymakers to ease.

Tightening fiscal policy?  The U.S. has been engaging in fiscal stimulus, but there are two issues that could reverse this policy.  First, the debt ceiling issue will return by September and automatic spending cuts will be enforced if a deal can’t be reached.  Second, although the full effects are difficult to determine, tariffs are, essentially, a form of consumption tax and raising them is an act of fiscal tightening.  Tightening fiscal policy may force the FOMC to start cutting rates.

Bullard and rate cuts: St. Louis FRB President Bullard chased a short-term rally in equities when he suggested the FOMC may need to cut rates soon.  We rate Bullard a level 5 dove in our rating system (1 = most hawkish, 5 = most dovish), so his stance isn’t a shocker.  However, we suspect his position probably isn’t the consensus on the FOMC.  One reason why is that the ISM Manufacturing Index is still in expansion mode. 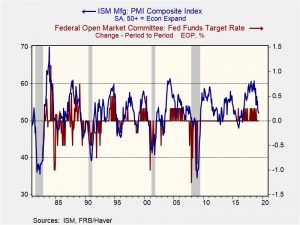 This chart looks at the ISM Manufacturing Index and the monthly change in the fed funds target.  Since 1983, a period of 403 months, the FOMC has cut rates when the ISM index was above 50 in 21 occasions.  We do note there were a series of cuts that began in August 2007 even though the ISM was safely above 50.  The trigger for these cuts came from a sharp deterioration in financial conditions in Q3 2007.  In the absence of a drop in financial conditions, which are currently benign, the FOMC will likely need to see more economic weakness to trigger rate reductions.

More on tech: Tech shares took a beating yesterday, with the Technology sector SPDR (XLK, 70.63) falling 1.8%.  It does appear that a bipartisan move to regulate the large firms in the sector, including anti-trust actions, is progressing.  Although it is unclear how this will play out, and it will likely take years to fully develop, the regulatory move will distract these firms and likely have an adverse impact on their performance.

Mexico: There are a number of cross-currents affecting the situation with Mexico.  First, Mexico is creating multiple responses to the tariff threat.  It has threatened retaliation, although the impact of any retaliation will be disproportionate to the damage the U.S. can inflict on Mexico.  There are also indications that Mexico is starting its own crackdown against illegal migration, but the government has indicated it will not grant Mexican asylum to Central Americans moving into the country.  Second, Mexico is trying to negotiate a deal that might prevent the tariffs from being implemented.  Third, there is an apparent effort by Congress to take back some of its trade authority by blocking the president’s proposed tariffs on Mexico.  Congress has mostly given up its role in shaping trade policy after making a hash out of it in the 1920s in a bill known as the Smoot-Hawley Tariff.  However, the administration’s strategy of using tariffs as its main foreign policy tool appears to be stirring a congressional response.  If Congress limits the White House’s ability to unilaterally act on tariffs, this policy tool may not be as easy to implement going forward.

Trouble for Maduro: Venezuelan President Maduro has suffered another blow as Russia begins to pull advisors out of the country.  The defense firm Rostec, which was training Venezuelan security forces, has decided to reduce the number of trainers, mostly because the country can’t afford to pay them anymore.  This news not only shows the degree of economic deterioration in Venezuela, but it also highlights the transactional nature of Russian foreign policy.  Essentially, Russia can’t afford to support all its allies and we suspect the costs of supporting operations in Ukraine and Syria are affecting Moscow’s ability to remain involved in Caracas.

A threat to the CPC: There are reports that the Chinese middle class is becoming worried about the trade war with the U.S.  The message from leadership is to prepare for hard times, which isn’t what those who have put together some savings want to hear.  Online reports suggest some households are considering diversifying out of the CNY into other foreign currencies or perhaps precious metals.  These Chinese citizens don’t threaten the regime as much as students would (no less on the 30th anniversary of the Tiananmen Square crackdown) by calling for democracy or mobilizing against the regime, but they are an economic threat.  The potential for capital flight exists as does a simple “hunkering down” in spending that would weaken consumption.

Odds and ends:It appears the SPD will continue to be part of the German coalition government, easing fears of snap elections.  China is warning its citizens that the U.S. isn’t a safe place to travel.  China also appears to be stockpiling soybeans, an indication that it is preparing for a long trade dispute with the U.S.  Inventory accumulation will be part of deglobalization as the world moves from “just-in-time” to “just-in-case” logistics.  Kevin Hassett fired off a parting shot, arguing that tariffs and deficits are bad for the U.S. economy.  Hassett is leaving his post as head of the CEA and is not a candidate for Fed governor.  The EU is close to making a decision on Italy’s punishment for ignoring fiscal and debt rules.  The Italian PM has threatened to quit over internal squabbling over this issue.