[Posted: 9:30 AM EDT] Happy Monday!  Equities are ticking higher this morning, walking up a wall of worry.  Here is what we are watching this morning:

Trade friction: A couple of weekends ago, Treasury Secretary Mnuchin declared a ceasefire on trade.  It didn’t last very long.  Over the weekend, meetings with Commerce Secretary Ross and Chinese officials ended on a frosty note.[1]  No joint communiqué was released and China indicated it would respond with retaliatory action if the U.S. places tariffs on Chinese imports.  Some of the issue here is that China thought it had secured a “time out” from the treasury secretary; turns out that wasn’t the case.

Meanwhile, Treasury Secretary Mnuchin faced a hostile group of allies at the G-7 meeting.  The weekend pre-meeting with finance ministers ended with a public split between the U.S. and the rest of the group.[2]  The leaders meet in Quebec this weekend and all indications are that this will be a difficult meeting.

Here is the basic issue.  At the end of WWII, the U.S. created a hegemonic structure that was unique to world history.  Instead of creating colonies that would be forced to run trade deficits with the host nation, the U.S. fostered a global trading system that virtually guaranteed the U.S. would run trade deficits.  When Nixon closed the gold window, foreign nations shifted from a dollar/gold standard to a dollar/Treasury standard rather than adjust their economies.  Since the U.S. can create Treasuries rather cheaply and with no feasible limit, there was little foreign constraint on U.S. debt growth or the size of the trade deficit.  In return for this generosity, the U.S. demanded the nations in the American trade orbit submit to U.S. foreign policy goals.

This was a Cold War strategy.  It was designed to create a unified free world and it worked.  There were serious downsides, however.  Foreign nations structured their economies to generate trade surpluses that would lead to unemployment in the U.S.  If we use the saving identity from macroeconomics, (M-X) = (I-S) + (G-Tx), trade surpluses are created by excessive public or private saving (S>I, X>M) or (Tx>G, X>M).  The U.S., being open to trade, must absorb the excess saving in the form of a trade deficit, which is seen domestically as either a deficit in private saving or, more commonly, a fiscal deficit.  This is why the common comment often heard in the financial media that the U.S. “must attract foreign saving” isn’t really accurate.  If that were the case, U.S. interest rates would need to rise to attract the funds.  In fact, U.S. rates remain quite low.

This trade arrangement is a vestige of the Cold War.[3]  The U.S. has every right to call for a new arrangement.  This change will be very painful for the rest of the world as it will force a restructuring on those economies.  Imagine Germany having to reduce its saving, as an example.  There are no stone tables anywhere saying that the U.S. must act to absorb the world savings.  However, this doesn’t mean that there won’t be costs of adjustment to the U.S., too.  First, foreign nations will be less beholden to the U.S. if they no longer rely on American consumption to absorb their excess production.  Thus, it would not be a shock to see the alliance system the U.S. built during the Cold War collapse.  And, second, it will almost certainly cause higher U.S. inflation. 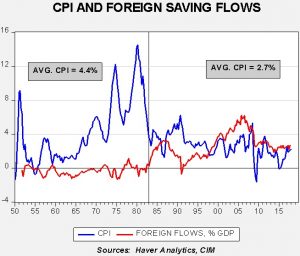 This chart shows the relationship between foreign saving flows (the inverse of the current account deficit) and CPI.  Since inflows have increased, inflation has declined.  This is part of the impact of globalization.

Is there a more effective way of prompting this change?  We doubt negotiations would work.  A good example is China, which shows no interest in changing its policies and simply wants to promise to buy more soybeans.  That isn’t reform, that’s a bribe.  The border adjustment tax would have been a good tool for this change.  Another would be to use the self-adjustment mechanism from the gold standard—force the dollar to depreciate.  Under the gold standard, a nation running a large trade surplus would accumulate gold and face inflation, while the deficit nation would have the opposite problem.  The changes in prices would naturally lead to a reversal of trade flows.  The large foreign reserve surplus nations are (or have done so in the past) purposely preventing their currencies from appreciating buy purchasing dollars (Treasuries).  The U.S. could counter that action by aggressively buying foreign assets.

Politically, though, the trade war makes more sense.  The average American better understands tariffs rather than exchange rates.  President Trump’s approval ratings have been steadily rising since the policy focus shifted from taxes to trade.  With mid-terms looming, we don’t see any reason why the White House would change tack.

Merkel on the EU: French President Macron has pushed for an expansion of powers for the EU.  Chancellor Merkel offered her position[4] which is far less ambitious and more or less solidifies the existing fiscal rules.  Merkel is trying to show she isn’t a roadblock to further European integration but she won’t permit an expansion that occurs on the back of German economic credibility.

Slovenia goes populist: In weekend elections, the Slovenian Democratic Party (SDS) took 25% of the vote, giving the anti-immigrant party 25 of the 90 elected seats.  Although the dominant party, it will be a while before a government is formed as most of the other parties dislike the SDS.[5]

Kim fires senior military officials[6]: As the summit with President Trump approaches, Kim Jong-un reportedly replaced three senior military officials.  Although it is always difficult to know for sure what is going on in the Hermit Kingdom, there are strong suspicions that these military officials may have opposed Kim’s upcoming meeting with Trump and the potential thaw with the U.S.  On the one hand, removing these officials just prior to a historic summit may indicate that he is facing significant internal dissent and thus if the meeting doesn’t go well it could lead to political instability in North Korea.  At the same time, taking this action before a major summit does indicate that Kim probably intends to press for a change in policy and will not brook potential opposition.

The employment report: We have received some questions about our non-farm payroll recession indicator, which shows that recessions tend to follow when the 12-month rolling total of payroll changes falls below 1.5 mm.  There is some confusion on causality; the real culprit that causes recession is the FOMC.  As the labor markets tighten, the Fed raises rates and the increase in rates is the real reason recessions occur.  The drop below 1.5 mm signals when the Fed has overtightened. 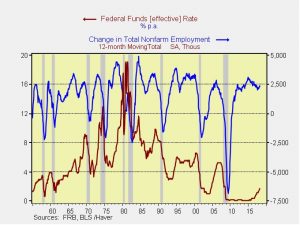