[Posted: 9:30 AM EDT] The big shock overnight came from a surpise announcement by former London Mayor Boris Johnson, who withdrew from the race for the PM job in the U.K. after a withering attack from an (now probably former) ally, Michael Gove.  This withdrawal adds to uncertainty surrounding the U.K. government.  Although Mr. Gove is running for PM, the leading candidate is Theresa May, the Home Secretary.[1]  May supported the remain campaign, but did say today that “Brexit means Brexit.”  She opposes another referendum.  Meanwhile, the Labour Party continues to self-destruct as the Shadow PM, Corbyn, refuses to step down despite a no-confidence vote.  Today’s FT is full of stories suggesting the EU is going to make it difficult for the U.K. in order to set an example for others.  George Soros, speaking to the EU Parliament, offered a dire warning about the impact of Brexit, suggesting it has unleashed a financial crisis similar to 2008.

The other big news came from mixed messages out of China regarding the CNY.  Reuters is reporting that, according to unnamed sources, the PBOC is willing to allow the currency to depreciate 6.8% (the degree of precision is worth noting).  The report suggested that as long as the decline in the currency is within expectations and managable, its preferred policy is a weaker currency.  The primary risk to China is that fears of depreciation could turn into a rout as it fosters capital flight.  It appears that the PBOC is trying to create a situation where the CNY can weaken without repercussions.  After the story was published, the PBOC tried to quash it, saying it has no intention to promote trade competitiveness through currency depreciation.  We suspect the PBOC wants to quietly weaken the CNY, but stories that offer targets are dangerous because financial markets have a tendency to immediately move toward the target level quickly which can become difficult to control.

With yesterday’s DOE report, we can update the oil situation.  U.S. crude oil inventories fell more than forecast, dipping 4.0 mb versus estimates of a 2.5 mb decline.

So, obviously, inventories remain elevated.  Inventories have been lagging the usual seasonal pattern.  We are in a period of the year when crude oil stockpiles tend to fall at an increasing pace.  The pace of declines will slow after Independence Day but we should have at least a couple of weeks with large draws in stocks. 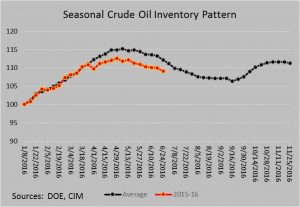 Based on inventories alone, oil prices are profoundly overvalued, with the fair value price of $32.99.  Meanwhile, the EUR/WTI model generates a fair value of $50.32.  Together (which is a more sound methodology), fair value is $42.06, meaning that current prices are a bit rich.  The recent turmoil with Brexit did put downward pressure on oil prices, but the improvement in sentiment has allowed oil prices to recover some of their losses.

[1] In the U.K, the Home Secretary has the mandate of internal affairs for the country.  This role includes overseeing MI-5, roughly the U.S. equivalent of the FBI.