[Posted: 9:30 AM EDT] Here are some of the items we are tracking this morning:

Fed stress tests give banks a green light: The banks performed well on the Federal Reserve stress tests, opening the sector to increasing dividends and stock buybacks.  Bank stocks lifted the broader indices yesterday and this trend will likely continue.

This chart shows the KBW Bank Index relative to the S&P 500.  Note that bank stocks jumped after the elections but have been consolidating for the past couple of months.  The stress test results will likely lead to another leg higher in these equities.

On the other hand, central banks are turning hawkish: In central bank meetings in Portugal, ECB officials hinted that tapering of their QE is in the offing, while the BOC and BOE both indicated that policy is set to tighten.  This policy change is significant because the equity bull market that began in March 2009 has enjoyed the backdrop of supportive monetary policy.  We are starting to see a backup in long duration Treasury yields (which is actually bullish for banks) and the dollar is weakening as other central banks signal a withdrawal of stimulus.  We are probably embarking on a new phase in this cycle that carries new risks.  Although policy tightening doesn’t necessarily signal the bull market is in trouble, policy will likely become a headwind in the near future and will no longer be a tailwind.

The South Korean president visits: Moon Jae-in visits the White House today amid reports[1] that the U.S. is preparing contingency plans that include military action if North Korea shows it has built a nuclear warhead[2] and/or has created an ICBM that can reach the U.S. mainland.  As we have recently discussed, a war on the Korean peninsula would be, to quote SOD Mattis, “catastrophic.”[3]  Moon will likely try to buy time because, in a war, his capital will be a primary target for North Korea’s massed artillery.

The fate of the former crown prince: The NYT reports[4] that the recently demoted Prince Mohammed bin Nayef is under house arrest, confined to his palace.  This report has been denied by the kingdom but the story is being widely reported in the regional media; the Iranian news agency FARS reports [5] that five other Saudi princes are also being confined to quarters.  Although none of this is definitive, if true, it would suggest that King Salman’s decision to elevate his son to crown prince has caused consternation among the royal family.  If this conflict escalates, it would be a potentially bullish event for crude oil because we doubt unrest will be contained in the kingdom.

Kurdish and Turkish forces fired on each other: There are reports that Kurdish YPG militias, one of the most effective fighting forces against IS, have also been engaging in skirmishes with Turkish forces.[6]  Turkey fears Kurdish nationalism because it could undermine the territorial integrity of Turkey itself.  The Kurds are considered to be the largest ethnic group in the world without a state; they have wanted a Kurdish state for well over a century.  One of our worries is that the fall of IS will simply lead to a series of wars as various actors attempt to control swaths of what used to be Iraq and Syria.

A militant Germany: Chancellor Merkel gave a remarkably critical speech today, criticizing the rise of protectionism and weakening international cooperation, laying the blame squarely on President Trump.  Her and her country’s discomfort with the change in U.S. policy is completely understandable—Germany prospered under Pax Americana because it no longer had to fear invasion from its neighbors.  The U.S. guaranteed it wouldn’t happen.  She is also correct that isolationism and protectionism won’t solve the world’s problems; however, if the U.S. has decided it’s getting out of the hegemony business, these positions may not help the world but they just might help the bottom 80% of the American household income distribution.  What will become worrisome is if Germany, sensing the vacuum, begins to reassert itself on the regional and world stage.  It will raise fears across Europe of the pre-1945 world in which the German problem was the key problem of Europe.  America’s hegemonic behavior since WWII has allowed the rest of the world to focus on their own issues and simply follow U.S. foreign policy.  Those conditions would change if the U.S. withdraws from the world and Merkel’s comments reflect the unease this change is triggering.

This chart shows current crude oil inventories, both over the long term and the last decade.  We have added the estimated level of lease stocks to maintain the consistency of the data.  As the chart shows, inventories remain historically high but they are declining.  We also note that, as part of an Obama era agreement, there was a 1.4 mb sale of oil out of the Strategic Petroleum Reserve.  This is part of a $375.4 mm sale (or 17.0 mb) done, in part, to pay for modernization of the SPR facilities.  We note that sales have reached 12.7 mb this year, which likely means we should see these sales end in the coming weeks.   International agreements require that OECD nations hold 90 days of imports in storage.  Due to falling imports, the current coverage is near 140 days.  Taking that into account, the draw would have been 1.3 mb, which is less than forecast.

As the seasonal chart below shows, inventories are usually well into the seasonal withdrawal period.  The typical decline has stalled; although currently below the usual September trough, the slowdown in withdrawals has been a bearish factor for oil prices.  If we take the SPR sale into account, the decline has been more in line with normal seasonal withdrawals and therefore we can conclude that the SPR sale has played a role in pushing oil prices lower. 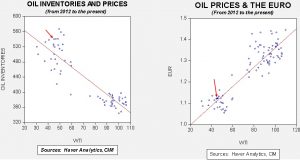 Based on inventories alone, oil prices are overvalued with the fair value price of $38.30.  Meanwhile, the EUR/WTI model generates a fair value of $52.23.  Together (which is a more sound methodology), fair value is $47.86, meaning that current prices are well below fair value.  Currently, prices are below our expected trading range; we view oil prices as attractive on a short-term trading basis.

[2] A warhead can be placed on a missile, survive launch and re-entry and detonate.  A device is a non-deliverable nuclear appliance that can explode and is used for testing and development.  So far, North Korea has proved it can do the latter but not the former.