[Posted: 9:30 AM EDT] There was quite a bit of news from yesterday through this morning:

ECB tells market “you misunderstand”: Yesterday, ECB President Draghi gave a speech that was taken to suggest that tapering was going to occur because the Eurozone economy is doing better.  The EUR rallied and we had a significant rise in long duration yields in Europe and the U.S.  The ECB took an unusual step to release a statement this morning indicating that the markets had misinterpreted Draghi’s comments and policy tightening isn’t imminent.  The EUR, which was rising this morning, pulled back sharply (U.S. Treasuries have rallied, too).  This will be an important test for the markets.  If the markets believe that what Draghi said yesterday is true, then the ECB correction this morning should be treated the same way as intervention against the trend; it will be seen as a EUR buying opportunity by traders.  If the ECB is successful in changing the narrative, the EUR’s rally and Treasury weakness will stall.  We tend to lean toward the former—that the EUR will likely continue to rally and Treasuries, which have been strong, could come under some pressure.

Health care vote gets extended: As the Senate GOP leadership unveiled its health care plan it became rather obvious that the vote would fail.  Majority Leader McConnell had previously indicated that a vote, up or down, would be held by July 4th, prior to the recess.  In something of a surprise, McConnell has decided to extend the debate on health care, suggesting he really wants a deal.  Equity markets didn’t like the shift at all.  It appears that equity markets care little about health care reform but are very interested in tax reform.  As long as Congress is focusing on health care, taxes are not being addressed and so extending the debate past the recess means that tax reform will be delayed.  Even worse, political capital is being depleted on health care that could be used for tax reform.  This is why we had the strong drop yesterday.

A coup brewing in Venezuela?  A helicopter, which appears to have been commandeered by rogue elements of the military, flew toward Caracas and dropped two hand grenades on the Supreme Court (only one detonated) and then moved to the Interior Ministry building and opened fire on it.  There are growing signs that elements of the military want to oust President Maduro and replace him with someone else.  It is important to note here that this threat isn’t coming from outside the ruling coalition but from within it.  The elements of the military that participated in this action appear to be aligned with the Socialists but are disenchanted with Maduro and are especially incensed by his scheme to change the constitution.  Recently, Maduro replaced the head of the country’s Strategic Operational Command, firing Gen. Vladimir Padrino Lopez and replacing him with Adm. Regigio Ceballos Ichaso.  Maduro should have a healthy fear of his military.  The late Hugo Chavez, being an officer himself, had a certain degree of respect from the military; Maduro, a former bus driver, doesn’t.  It should also be recognized that we wouldn’t anticipate a major policy shift if Maduro is replaced.  The coup plotters appear to be leftists who simply want a different leader.  However, if unrest rises, it could further reduce oil supplies and might be bullish for oil in the short run.

China’s new avenue for capital flight—tourists!  A recent study by the Federal Reserve[1] suggests that Chinese spending on tourism is much higher per capita than one usually observes.  The anecdotal evidence is that Chinese tourists are using their foreign trips to purchase assets in foreign nations, evading Chinese capital controls.  Below is a telling chart from the paper.

The regression line shows the normal spending one would expect given the level of per capita income.  Although we don’t show the chart here, in 2010, Chinese travel imports were on the regression line.  The above chart shows that China’s travel spending is near that of Denmark, which has a per capita GDP about 2.5x greater.  Note that Russia, another nation plagued by capital flight, is in the same area of the graph as China.  Besides the obvious conclusions drawn, that Chinese investors are clearly willing to take unusual steps to move funds out of the country, it also means that this spending is really capital account spending and the Chinese current account surplus is understated because tourist spending is considered a form of imports and thus is part of the current account.

Growing concern about financial stress (or the lack thereof): NY FRB President Dudley, Chair Yellen and Vice Chair Fischer have all recently commented about the lack of financial stress in the system.  We have discussed this issue consistently now for a few years. 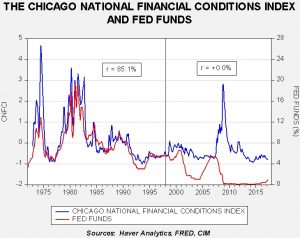 This chart shows the Chicago FRB index of financial conditions and fed funds.  The conditions index is a measure of stress—the higher the index, the greater the level of stress.  From the early 1970s into 1998, fed funds and the conditions index closely tracked each other; in fact, we would argue that stress acted as a force multiplier for policy.  As the FOMC raised rates, stress rose, further contracting lending and signaling rising risk in the financial system.  This led to slower growth.  As the Fed cut rates, the opposite occurred.  What changed?  We think two things.  First, as the Fed has become increasingly transparent, it has become easier for the financial markets to predict policy.  In fact, the Fed seems to pride itself on not surprising the markets.  Thus, there is little fear of policy even when rates are increased because the hikes can be discounted well in advance.  Second, as the financial system has become more concentrated, the Fed is concerned that it has become more fragile.  Thus, it works to contain financial stress (or keep financial conditions calm) as it feels it can’t risk policy induced stress because it can’t easily control the impact of stress.  The data tend to bear this out.  Once stress rose in 2008-09, it took years of low rates, forward guidance and QE to bring it down again.  Recent comments from Yellen, et al. suggest that the FOMC would like to inject some stress into the financial system to prevent “irrational exuberance.”  The problem is that we fear they don’t have the tools to contain it once introduced.  The Fed is acting like a forest manager who never allows fires; eventually, a fire naturally occurs and there is so much built up tinder due to fire suppression that a major outburst becomes impossible to contain.  Thus, we are leery of these recent comments because by the time stress begins to rise it may not be easily contained.