[Posted: 9:30 AM EDT] U.S. equity markets are higher this morning after taking a tumble yesterday.  Optimism on trade is lifting domestic equity futures.  The Democrats start their debates tonight and Robert Mueller will publicly testify.  Consumer confidence data deserves a second look.  Here is what we are watching today:

G-20: Treasury Secretary Mnuchin gave the markets hope this morning after indicating a deal is “90% complete.”  This comment has raised hopes this morning, but it should be noted that he made similar comments in May.  Essentially, talks stalled in early May after the U.S. accused China of reneging on the agreement.  Expectations for this weekend’s trade talks are mostly about preventing additional tariffs from being implemented, a temporary ceasefire.  However, the odds of a full agreement are nearly zero.  Still, this morning’s rally does show that the financial markets are focused on this issue and want to see a full-blown trade conflict avoided.

The problem with trade impediments: Arbitrage is one of the oldest methods of making risk-free money.  If one can buy in one market at a lower cost and sell the same good for more money elsewhere, it’s a good thing!  Under free markets, arbitrage is usually ephemeral; others notice it and the advantage quickly evaporates.  But, if there are regulations or trade barriers in place, the likelihood of the arbitrage holding for a longer period of time increases.  Of course, there are potential legal risks for the party trying to perform the arbitrage.  We note this morning that some tech firms have apparently figured out a way to skirt the trade ban with Huawei (002502, CNY, 3.53).  Although the companies involved may not have violated any laws, their actions do raise the question of compliance with the spirit of the regulations.  One of the problems with creating arbitrage opportunities with regulation is that they encourage ways to capture the gains.

The Fed—when doves cry: There is dovishness and then there is real dovishness.  First, Chair Powell gave a speech with few surprises, especially in light of his press conference.  He noted risks to the economy and worries about low inflation.  However, he didn’t clearly signal a rate cut and hinted at the problems of political pressure, and these issues spooked the equity market.  But, the real hit came from St. Louis FRB Bullard, who dissented at the last meeting, wanting the FOMC to reduce rates.  Bullard suggested that although he supports a rate reduction, he believes only a 25 bps move is warranted at this time.  The market clearly wanted more.  In response, markets reacted as one would expect—the yield curve flattened and equities slumped.  Does this mean the Fed is changing course?  Not really.  It’s just that the financial markets have gotten a bit ahead of themselves.  On the other hand, if the economy decelerates further, a more aggressive cut might make sense.

Chair Powell is walking a delicate line; he is clearly getting tremendous pressure from the White House on policy and he fears the loss of institutional independence.  One way he appears to be dealing with this problem is by reducing transparency.  We are big fans of this idea; transparency has led market participants to complacency.

You heard it here first: The White House has created a “short list” of candidates for the two open governor positions on the FOMC.  St. Louis FRB President Bullard has confirmed that the administration has contacted him about the position.  We have noted in the past that Bullard and Minneapolis FRB President Kashkari would be choices for these positions that would align with the interests of the White House.  Both are consistent doves and would likely make it through the confirmation process without incident.  Bullard appears to have demurred, but we still expect him and perhaps the aforementioned Kashkari to be on the list.

A confidence problem: We rarely comment on data that comes out after 8:30 EDT because it is usually covered by the media.  However, on occasion, the information is so important that it warrants analysis.  Yesterday’s consumer confidence was that important.  The data for June came in much weaker than forecast, at 121.5 compared to forecasts of 131.1.  The May data was revised to 131.3 from 134.1. 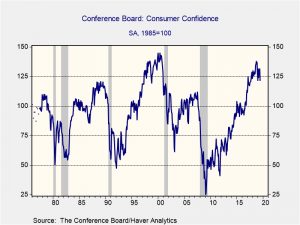 Big declines like this often occur before recessions.  Perhaps even more concerning is the present situation component of the data. 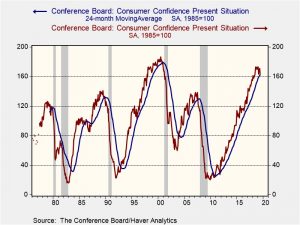 This is the present situation index with a two-year moving average.  Although breaking that average isn’t a perfect indicator, falling below it from a high level has tended to presage recessions in the past.  The economy is decelerating and the risks of recession are increasing.

Iran: The president appears to be setting a “red line” of sorts, indicating that a military response will occur if an American dies due to actions taken by Iran.  Although we suspect this is true, the problem with red lines is that one has to act once they are crossed; in addition, it gives an enemy a clear target if they want to escalate.  If Iran views the president as soft, it will move to cross this red line.  Given Trump’s Jacksonian tendencies, a strong response will likely follow.  Iran is expected to reach a uranium enrichment threshold in the very near future; we will be watching the response from Europe because boosting enrichment will tend to be viewed in Europe as breaking the Iran nuclear agreement.

Brexit: Boris Johnson is pledging “do or die” for Brexit.  The vote for PM occurs next month, and will be decided by a small subset of the U.K. voting population.

EU news:The EU is pushing for a trade agreement with South America.  Denmark has a new government.  NATO defense spending is, again, below the guideline of 2% of GDP.  Europe is bracing for a heatwave.