Good morning and happy Monday.  U.S. equity futures are higher this morning, while Europe is lower.  Treasuries yields are lower, as well as the dollar, while gold is up. EU leaders are talking to Chairman Xi today; the new security law passed in Beijing, meaning it has become law in Hong Kong.  We recap banking data.  President Trump says he will talk to Maduro.  Our usual commentary on COVID-19 is available.   Here are the details: 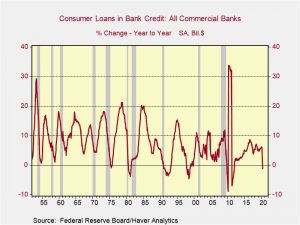 Second, deposits have soared, rising 20.7% from last year, the fastest growth for this data (which goes back to 1973.

Third, business lending has soared (and partly accounts for the jump in deposits). 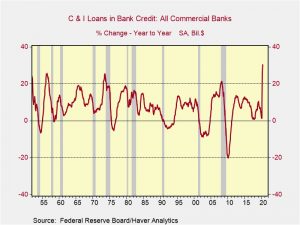 What does this tell us?  Households are cutting their borrowing and increasing their cash holdings, while businesses are tapping credit lines and gathering cash too.  There is a pile of liquidity in the financial system and where it eventually ends up will be critical for financial and commodity markets.