[Posted: 9:30 AM EDT] Most of the overnight news surrounds the oil market; we have our analysis of the weekly data below and we will offer our views on oil there.  We are seeing reports that China is trying to work out a deal with North Korea in which the Kim regime will cease missile tests in return for a smaller U.S. military footprint in South Korea.  Of course, China would probably like to see the THAAD installations removed, and the new Moon administration is pushing for lower key military exercises.  The problem with this proposal is that such measures have been tried before with little success; the North Koreans have repeatedly violated agreements.  China is afraid to press the Kim government too hard, fearing the regime will fail and cause a refugee crisis and perhaps a hostile government on the Yalu River.  We remain highly concerned about an escalation to conflict.

This chart shows current crude oil inventories, both over the long term and the last decade.  We have added the estimated level of lease stocks to maintain the consistency of the data.  As the chart shows, inventories remain historically high but they are declining.  We also note that, as part of an Obama era agreement, there was a 0.8 mb sale of oil out of the Strategic Petroleum Reserve.  This is part of a 17.0 mb sale to partially pay for modernization of the SPR facilities.  We note that sales have reached 11.3 mb this year, which likely means we should see these sales end in the coming weeks.  International agreements require that OECD nations hold 90 days of imports in storage.  Due to falling imports, the current coverage is near 140 days.  Taking that into account, the draw would have been 3.2 mb, which is well more than forecast.

As the seasonal chart below shows, inventories are usually well into the seasonal withdrawal period.  This year, that process began early.  Although the actual level of stockpiles remains quite high, we have seen rather sharp stock declines until the past three weeks.  We would expect the draws to increase as the recent rise in imports should fade. 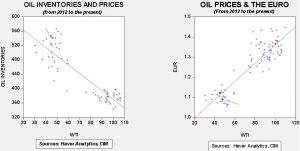 Based on inventories alone, oil prices are overvalued with the fair value price of $38.35.  Meanwhile, the EUR/WTI model generates a fair value of $52.03.  Together (which is a more sound methodology), fair value is $47.75, meaning that current prices are well below fair value.  Currently, prices are below our expected trading range; we view oil prices as attractive on a short-term trading basis.

This chart shows the nearest WTI futures price.  We have drawn a box between $45 and $55 per barrel.  Note that nearly all prices have fallen within this range since early October.  This range has developed because OPEC’s cuts are being offset by rising U.S., Canadian and Brazilian output, leaving a mostly balanced market.  As the chart shows, prices at this level have been attractive entry points.  Of course, the risk is that we are seeing a downside breakout but we view further weakness as unlikely without strong evidence of OPEC cheating.  Thus, a recovery should develop in the coming weeks.  If we are correct, we should see two patterns develop.  First, the market will need to stop declining on bullish news.  Second, in the commitment of traders’ data, we will need to see a sharp decline in the number of speculative long positions.

Most of the time, oil markets trade in ranges because the market has a cartel structure.  A cartel usually keeps some production idle to bolster the price.  This excess capacity can be brought on line if prices rise, so the net effect is stabilization.  On the other hand, the media hates trading ranges; they simply aren’t news.  Thus, there is a tendency for reporters to talk up the breakout.  That’s why most of the talk is bullish near the tops and the talk is bearish at the bottom of ranges.  Current prices are well below fair value and we expect prices to stabilize in the coming weeks.