[Posted: 9:30 AM EDT] Happy Summer Solstice!  Here is what we are watching this morning:

Trade and the dollar: India joined other nations by applying tariffs against the U.S.[1]  EU officials are worried that U.S. trade policy will upend its longstanding Common Agricultural Policy (CAP), which is a system of subsidies critical to maintaining EU unity.  Earlier this month, the U.S. applied trade restrictions to Spanish olives but the fear is that the action will broaden.  It is interesting to note that French President Macron criticized CAP,[2] but we don’t see this as a commonly held position among European leaders.  Essentially, nearly all nations offer some degree of support for agriculture.  Food security is simply too important politically and countries want control over the food supply.  This leads to preferential treatment for farmers in all sorts of ways.  CAP, a system of farm subsidies, is how the EU maintains a free trade zone, essentially preventing overt trade restrictions within the EU.  However, these restrictions reduce foreign imports of agricultural products.  This is what the U.S. is attacking.  But, if the CAP system devolves, the EU could very easily fall apart, too.  Nations within the EU would almost certainly put up internal barriers to agricultural trade to protect their domestic farmers and ranchers, and once internal barriers for one product are implemented it would not be a surprise to see other industries ask for protection.  It’s important to remember that the EU began as a free trade zone and has morphed into a much larger entity.

We are starting to see the trade actions causing secondary effects.  Daimler (DAI, EUR 58.20) warned today that tariffs could adversely impact its profits.[3]  This is the first time we have seen trade offered as a reason for lower earnings.  This news led European automaker shares lower.  And, in what has to be a most bizarre situation, the Commerce Department is reportedly “probing steel profiteering after tariffs.”[4]  Often, the left is criticized for implementing regulations and then being surprised that prices rise.  A GOP administration being “shocked” that steel prices rose and companies are making more money after the government takes steps to restrict foreign supply is really surprising.  Meanwhile, U.S. agriculture is being roiled by retaliatory tariffs.[5]

The bottom line is that global trade impediments are a reversal of nearly 90 years of steadily falling tariff barriers.  This trend only occurred because of U.S. leadership; the U.S. essentially traded access to the U.S. consumer in return for cooperation on global security.  For example, Japan and Germany gained access to the U.S. market and we got to place military bases on their territories.  That system worked great during the Cold War but in its aftermath we haven’t created a rationale for continuing it.  Although Trump is catching the blame for disruption, the reality is that domestic political support for free trade has been under pressure for a long time.  Trade impediments act like a restriction on the dollar supply and thus, all else held equal, the wider the “trade war” goes the greater the bullish impact for the dollar.

BOE: The Bank of England left policy unchanged as expected, but the vote was 6-3, indicating rising opposition to current policy.  The dissenters wanted to raise rates.  The idea that rates could rise in the near future boosted the GBP.

OPEC: Oil prices reversed yesterday’s gains on bullish inventory data (see below) due to fears that OPEC would boost output significantly.  There are reports that Iran is softening its opposition to raising production.  Russia has been pressing for an increase of 1.5 mbpd.  We believe Saudi Arabia is supportive of that level of increase (since it will provide most of it), but the kingdom wants to keep peace within the cartel, which means a compromise.  We have been in the compromise camp, expecting a token increase of 0.4 to 0.6 mbpd.  The latest suggests that Saudi Arabia is more in the 1.0 mbpd camp.[6]  This level of increase may not add all that much to world supply as disruptions in Libya and Venezuela will offset some of this proposed increase.  However, it is a bearish surprise for the market.  In addition, U.S. output, which has been rising at a surprising clip, is about to stall because of the lack of pipeline capacity in the Permian Basin.  Reports indicate “DUCs” are rising rapidly, which will reduce current supplies but represents future production.[7]  As we note below, a strengthening dollar is a bearish factor for oil; rising supply probably caps current prices.  On the other hand, there doesn’t appear to be enough oil on global markets to cause a major bear market to develop.

As the seasonal chart below shows, inventories are well into the seasonal withdrawal period.  This week’s rather large decline is consistent with that pattern.  If anything, the draw was stronger than normal.  If the usual seasonal pattern plays out, mid-September inventories will be 418 mb. 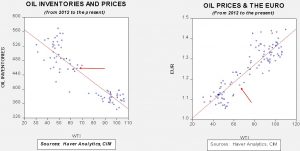 Based on inventories alone, oil prices are near the fair value price of $65.51.  Meanwhile, the EUR/WTI model generates a fair value of $60.96.  Together (which is a more sound methodology), fair value is $62.05, meaning that current prices are above fair value.  Currently, the oil market is dealing with divergent fundamental factors.  Falling oil inventories are fundamentally bullish but the stronger dollar is a bearish factor.  And, as we noted above, if OPEC increases output the rising trend in oil prices will probably stall.