Happy post-Fed Day!  It’s all bullish today; equities are higher, bond yields are lower and gold is on a tear (and the dollar is weaker).  The only worry?  Iran claims to have shot down a U.S. drone, sending oil higher.  Here is what we are watching today:

The Fed: We were concerned the Fed would be hawkish.  It turns out our worry was unfounded.  In the statement, the word “patient” was removed and replaced with “uncertainties,” making it clear the balance of risks has moved from balanced to recession.  The statement also openly discussed acting to “sustain the expansion.”  Normally, one does not do that by raising rates.  As expected, St. Louis FRB President Bullard dissented, calling for a rate cut; this represents the first dissention in the Powell era.

The dots show an interesting divide.  The median year-end rate hasn’t changed; it remains steady.  However, eight voted to push rates lower by year-end, eight are calling for no change and one still leans toward a hike.

Although it isn’t quite appropriate to use an average calculation with such a small sample size, it is interesting that the average is lower than the median because more dots are at the low end relative to the high end of the range.  The averages for this year and subsequent years show a dovish shift. 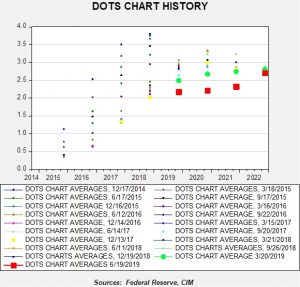 The large green dots show the March meeting and the red blocks are yesterday’s result.  There is a clear move downward in the average, although it is also clear the Fed doesn’t see a recession on the horizon and any cuts will be reversed in a couple of years.  That means the Fed thinks it can bring a soft landing.

The market reaction was consistent with dovish policy: yields fell, gold rose and the dollar declined.  Equities did rise later in the day but the initial reaction was modest.

What did Powell accomplish?  It was actually a move that Greenspan would appreciate.  He was able to bring a result consistent with a rate cut without actually making one.  The cost is that he will need to make a cut at the July meeting (which is not a quarterly meeting, when cuts have become traditional) or risk a significant market retreat.  If the FOMC doesn’t follow through on rate cuts, political pressure will rise and the bond market, which is rallying in part on expectations of future rate cuts, will reverse.

Iran: Iran has downed a U.S. drone.  Iran claims the plane was over its airspace, while the U.S. says it was in international air space.  Oil prices, which were lifting on dollar weakness, took another leg higher in response.  There are reports that the administration is suggesting ties between al Qaeda and Iran, raising fears of similar accusations that preceded the Iraq War.  We still doubt the U.S. and Iran will end up in a full-scale conflict, but the odds of a mistake rise when there is “ordinance in the air.”  One interesting sidelight—firms that provide private shipping security are seeing their business soar.

Trade talks: There isn’t too much new on the trade front.  China appears to be framing the discussion between Presidents Trump and Xi as occurring because the U.S. is asking for talks.  The trade teams have resumed negotiations.

At the same time: We note an interesting report that suggests China is taking steps to appreciate the CNY into the weekend meeting.  Some of this could be to temper capital flight, which is likely to accelerate from Hong Kong but could spread if the CNY weakens.  Yesterday, we noted that the White House hasn’t taken what we view as the most potent step to reduce the trade deficit, which would be a concerted effort to weaken the dollar.  Although dovish policy from the Fed would help in that process (check!), open jawboning by the president and his Treasury secretary could accelerate the process.  A weaker dollar and even modest tariffs would be an extremely powerful mix; we could see something akin to “Plaza Accord II.”

Brexit: It’s now down to four candidates; Rory Stewart did not get enough votes to survive.  Boris Johnson continues to dominate, with nearly three times more votes than the next two.  Although it’s not a done deal, it looks like Johnson will be one of the candidates when the Tory membership votes for a new PM.

Odds and ends: Budget fears remain elevated.  Reports suggest the deadlock in Venezuela has led the White House to lose interest.  The acting defense secretary may not be able to negotiate missile talks with Turkey.  Mexico has passed USMCA, the first of the three nations involved to do so.

This is the seasonal pattern chart for commercial crude oil inventories.  We are now well within the spring/summer withdrawal season.  This week’s decline is consistent with seasonal patterns.   We should see continued inventory declines into September; it would be bearish if stockpiles start to rise again.

Based on oil inventories alone, fair value for crude oil is $47.45.  Based on the EUR, fair value is $52.69.  Using both independent variables, a more complete way of looking at the data, fair value is $49.87.  As oil prices move closer to fair value, the risk of a sharp rally from a geopolitical event is elevated.  Technically, oil prices are trying to stabilize, although they remain in a downtrend.  Overall, the bear case for oil is starting to “age” and we are probably heading into a period of recovery if oil inventories follow the usual seasonal pattern.