[Posted: 9:30 AM EDT] Happy Juneteenth!  After a wild day yesterday, all is quiet before the conclusion of the FOMC meeting.  Here is what we are watching today:

The Fed: The Fed meeting concludes today.  We are expecting a hawkish tone, at least initially, from the statement and the dots.  This is based on our hawk/dove analysis. 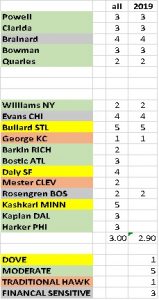 This is our hawk/dove table.  We rank members from 1 to 5, with 1 being most hawkish and 5 most dovish.  We also note their leanings.  Moderates, doves and hawks all derive some guidance from the Phillips Curve structure, where doves use the structure to call for easing, while hawks call for tightening.  The moderates continue to use the structure but have less faith in it and are more willing to use discretion in deviating from it.  Our take is that the committee is dominated by moderates.  The financial-sensitive members follow the path laid by Jeremy Stein, former Fed governor and economics professor who has argued that the Fed needs to take financial markets into account when setting policy.  Fed policy since Greenspan has been to ignore bubbles, in theory, because they are too hard to determine either in advance or in real time, but, in practice, it’s because using monetary policy to end bubbles is politically fraught.  If a bubble occurs, the Fed should simply assist in the cleanup.  The financial sensitives argue that the costs of bubbles are too high to ignore; the rising equity market will tend to lead the financial sensitives to hold off on cutting rates.

To move the dots chart median lower, we would need to see a minimum of eight members vote for a rate cut.  The March dot plot had 10 members vote for steady policy, with six looking for hikes.  It would be a huge reversal for any of those calling for a rate increase in March to shift to a cut in June, so it makes sense that we would need to see a minimum of eight members move from a steady posture to a cut in order to move the average dot lower.  That shift is unlikely.  We will see some move in this direction; Bullard, Kashkari and Daly will likely signal a cut.  Bostic might change due to his earlier discussions of the yield curve.  However, the moderates have mostly signaled steady.  We doubt Powell will tip his hand toward a cut.  The “financial sensitives” will worry that moving to cut rates will trigger a market bubble, so they will likely hold their fire as well.  Thus, the median dot may signal steady policy but not a cut.

Now, let’s look at the actual voters.  We would expect all the moderates to vote for no change.  The financial-sensitive voters will also likely vote for no change, worried about the behavior of the asset markets.  The traditional hawks won’t move either, so the only one to likely vote for a cut is Bullard.  We expect the Fed meeting to yield the removal of a rate hike from the dot plot, with no change in rates and one dissent for a rate cut.  Powell’s press conference will be more dovish than the materials offered.  Overall, the Fed will likely disappoint but the financial markets feel pretty confident that the economy is weakening, therefore we still expect risk-on assets to digest the bearish news without serious incident.

A couple of new twists to the meeting occurred yesterday.  As we noted, ECB President Draghi indicated that, without a rise in inflation, the Eurozone bank is prepared to add stimulus.  This news caught the attention of President Trump, who suggested the easing was being done to deliberately weaken the currency.  Although establishment economists defended Draghi, the president isn’t wrong about his assessment; additional stimulus will likely weaken the EUR.  It may not have been Draghi’s intent but there is no doubt that additional stimulus would likely depress the currency.  We suspect the president is using Draghi’s speech to further pressure the FOMC to cut rates.  The second twist came from reports that the president had inquired about the legality of demoting or removing Chair Powell.  It’s clear the president is pressuring the Fed to cut rates to maintain the expansion; what isn’t clear is if the pressure will hurt or help his efforts.

One issue that has surprised us thus far is that the president hasn’t used all the stimulus tools at his disposal; currency policy is set by the Treasury and he could demand that Mnuchin begin intervening in the currency markets to depress the dollar.  Although Fed cooperation would be helpful in this effort, it isn’t necessary.  So far, the president has avoided anything that would weaken the greenback; we remain mystified as to why he hasn’t taken this route.

Trade talks: The other item that lifted risk assets yesterday were reports that Presidents Trump and Xi will meet at the G-20.  Although unconfirmed, China has suggested that “Trump made the call” suggesting the U.S. wants the deal more than China.  This has raised hopes that a deal might get done.  We have serious doubts this is possible, because trade policy has now become tied to national security policy.  We note reports from firms looking to move their supply chains from China as evidence that companies are viewing the relationship as irrevocably changed.

Investor pessimism: A recent survey suggested that fund managers are unusually defensive, almost preparing for recession.  We have noted levels of retail cash consistent with recession or even financial crisis. 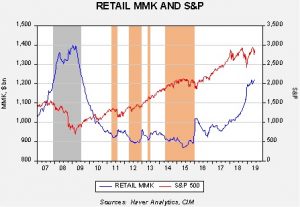 This chart shows the S&P and the level of retail money market funds.  The latter has reached a new record for this business cycle.  The economy was in recession the last time money market funds were at this level.  This pessimism highlights the Fed’s problem, especially for FOMC members who are financial sensitives.  If the Fed cuts rates and it lifts investor sentiment, then a melt-up is possible, if for no other reason than there is ample liquidity and it might find its home in equities if confidence returns.

Iran: The tensions between Iran and the U.S. are putting Europe in a bind.  The U.S. is pressing for the EU to adopt the U.S. sanctions regime, while Iran wants the EU to circumvent U.S. financial sanctions.  The EU realizes it does not want to fall afoul of U.S. financial sanctions.  It also hopes Iran doesn’t exceed the terms of the agreement on uranium enrichment; if the EU finds that Iran is out of compliance, the JCPOA is dead.  In the end, we expect the EU to support the U.S. with great reluctance; the costs of siding with Iran are simply too great.

Hong Kong: Carrie Lam has offered a formal apology, but it hasn’t been enough to placate the protestors.  Chairman Xi’s usual modus operandi would be a crackdown.  However, that may not be possible in the current environment.  We can only conclude that Beijing overplayed its hand with the extradition bill, mistakenly believing the specifics of the case that led to the bill would hide the underlying goal.  We would look for Xi to bide his time and a crackdown will come when it is more opportune.

Facebook (FB, 187.01) into crypto: Facebook announced that it is creating a new token to facilitate payments in the social media platform.  The best analysis of this move we have seen is here and here.  We note that regulators are watching this with interest; it has attracted the attention of Congress as well.

Brexit: After yesterday’s Tory MP vote, we are down to five PM candidates.  Boris Johnson continues to lead.  The biggest gainer was Rory Stewart, the only candidate still indicating he won’t support a no-deal Brexit.  Johnson did hint at snap elections if he wins, which is a risky strategy; however, to bring a deal, he needs a bigger majority and that might not be a bad plan given the divisions within the Labour Party.

Odds and ends: The EU has delayed a decision on adding Albania and North Macedonia to the group.   There is growing fear of a budget crisis in September.  China’s home prices are surging, complicating stimulus plans.