[Posted: 9:30 AM EDT] It’s looking like a “tough Tuesday.”  Risk-off is clearly evident—Treasuries, the yen and the dollar are higher, while gold is flat and equities, especially emerging markets, are under pressure.  Oil and commodities are lower as well.  Here’s the story:

Trade: President Trump has threatened[1] an additional $200 bn in tariffs on Chinese imports; China has vowed to retaliate in kind.  At the same time, the Senate voted overwhelmingly to reinstate the penalties on the Chinese tech company ZTE (SHE: 000063, CNY 20.54).

What makes analyzing this brewing trade war so difficult is that we really haven’t had anything like this since the 1930s.  Under U.S. leadership, tariffs have been steadily declining since the end of WWII.  Even though there has been the occasional trade spat, such as the “voluntary” auto export restrictions in the late 1980s, a broad-based trade war is something that probably no living analysts remember.  The Smoot-Hawley Tariffs were passed in 1930.  A 30-year-old analyst at that time would be about 118 years old.  Accordingly, there probably isn’t anyone out there with actual adult experience of rapidly rising tariffs.

So, if this continues to escalate, what happens?  In our opinion, the most likely development is higher inflation.  The steady decline in inflation that began in the early 1980s was mostly due to supply-side reforms.  Globalization and deregulation led the way to improving efficiencies and reducing labor costs.  Although the latter remains in place, a trade war will obviously undermine globalization.  That development would lead to less efficiency and higher prices.  However, other than the trend, significant uncertainties still remain.  First, if markets remain deregulated, meaning the new introduction of technology will continue unabated, then rising labor costs will be partially blunted by increasing automation.  Second, the Federal Reserve can keep inflation expectations anchored by proving its independence and raising rates high enough to maintain low inflation expectations, even at the risk of recession.  If these two factors remain in place, inflation probably remains relatively tame.

Market behavior suggests investors believe these two factors will remain in place.  If investors believed otherwise, we would be seeing a rise in long-duration yields.  In fact, the opposite is occurring; bond yields are falling, suggesting the financial markets believe the risk of recession is higher than the risk of reflation.  Interestingly enough, there is nothing in the data to suggest a recession is on the horizon.  For example, the Atlanta FRB’s running estimate of Q2 GDP is now +4.8%. 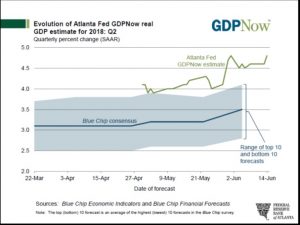 Here is the evolution of the data by estimated contribution to growth. 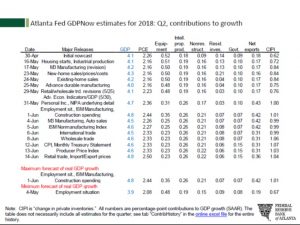 Virtually all sectors are additive to growth, including net exports, which is surprising given how U.S. growth is outpacing most of our trading partners.  As one would expect, consumption is robust, accounting for more than half of the growth estimate.  There is nothing in this data to suggest an imminent slowing.

The dollar’s strength is a drag on equities, especially large caps and foreign equities.  The dollar’s rally is based on two trends.  First, the divergence on monetary policy is dollar supportive.  Historically, the record on interest rate differentials is decidedly mixed but, for now, the tightening Fed is bullish for the greenback.  Second, assuming the dollar remains the preferred reserve currency, restrictions on imports, the primary way the world acquires dollars, act as a reduction on the global dollar supply.  As a result, tariffs are dollar bullish until nations decide to use another currency for reserves.  At present, there is no real alternative to the dollar so we should assume the threat of tariffs will be dollar bullish.  A tariff-driven dollar bull market would be unprecedented in post-WWII history.

The other key issue to watch is the Fed’s independence.  If the economy begins to weaken, the White House will likely put pressure on Chair Powell to lower rates quickly.  We note the two-year deferred Eurodollar futures implied yield is holding around 3.00%, suggesting the market does not expect more than four more rate hikes.  If there were serious inflation fears, we would expect that implied rate to move higher.  That hasn’t happened, which is further evidence that the financial markets don’t expect this recent growth spurt to last.  The consensus also expects the FOMC to keep inflation expectations anchored.

The other factor that makes this situation so fluid and difficult is that the White House doesn’t appear to have a clearly detailed plan in place.  In other words, it’s hard to know what would constitute a victory.  There have been a parade of comments in the financial media suggesting these announcements are mere posturing and that a trade war isn’t likely.  Perhaps that is the case.  However, Treasury Secretary Mnuchin seems to have disappeared and the president seems to have taken over trade policy.  If victory requires foreign nations to admit they were wrong and simply accept tariffs, then that probably isn’t going to happen.  Although the EU, Canada or Mexico might eventually offer the president a symbolic win, we can’t see China doing that.

There remain numerous positive factors.  As noted above, economic growth remains strong.  Earnings are great.  Consumer and business sentiment remain elevated.  Household cash is rising, which could fuel equity buying.  Simply put, there are clear positive factors that could fuel an equity rally.  But, the high uncertainty surrounding a trade war is offsetting these bullish factors.  If these bullish factors begin to fade, increasing financial stress is likely.