Tariffs and trade: While there wasn’t any major news on this issue over the weekend, financial markets are discounting the potential outcome of a trade war.  Although there are legitimate concerns about the long-run impact of a breakdown of the global trade system, the short-run benefits to the administration are clear—talk of tariffs is boosting the president’s popularity.

The chart on the right overlays the president’s average approval ratings with the Google Trends tracking of the work “tariff.”  The low point in approval occurred as the tax law was being enacted last December.  Soon after, the president’s policy emphasis shifted from taxes to trade and his approval ratings rose.  Although the tax cuts are clearly popular with the right-wing establishment, the right-wing populists were not all that impressed.  However, the prospect of tariffs has clearly boosted sentiment.  The chart on the left shows a scatterplot of the series on the right.  The conclusion to be drawn by the White House is that trade impediments are resonating.

Equity markets, however, are not impressed with trade impediment rhetoric. 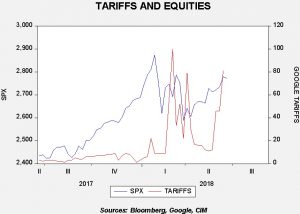 This chart shows the data from Google Trends on the word “tariffs” and the S&P 500 weekly close.  Since trade impediment talk has heightened, equities have declined from their highs and moved sideways.  It’s interesting to note that equities recovered when the rhetoric eased a bit recently.  As talk of trade impediments has escalated, equities have started to stall again.

A common remark we hear is that, “The president won’t want a weak equity market going into midterms.”  This data would suggest that the president probably isn’t all that concerned as recent equity market weakness hasn’t dented his approval ratings.

OPEC: Last week there were great fears that OPEC was planning to boost production by 1.0 to 1.5 mbpd.  Current comments suggest a much less increase of only 0.3 to 0.6 mbpd.  Russia is pushing for a bigger increase and we suspect Russia will simply cheat if it doesn’t get it.  The nations within OPEC that lack excess capacity, mostly Venezuela, Iraq and Iran but others within the cartel as well, are reluctant to boost output.  Saudi Arabia is in a tough spot.  President Trump has deployed social media to criticize OPEC for keeping prices too high and the Saudis are sensitive to those comments.  However, the kingdom also has an IPO to price at some point and wants higher oil prices to boost the value of the sale.  Thus, it looks like we are getting a compromise which, given recent price weakness, is bullish.

On the topic of oil, we have seen the Brent/WTI spread widen out, in part due to the lack of American capacity to move oil into the export market.  We are hearing reports that China is considering targeting oil and other energy products (perhaps even coal) for the second round of tariffs.  In theory, which assumes a frictionless world, the loss of exports to China would be offset by exports to other places.  And, over time, that would happen.  But, in the short run, where “friction” exists, the China threat is bearish for WTI.

Merkel wins: Last week, we noted the refugee spat between Chancellor Merkel and CSU leader and interior minister Horst Seehofer.  Seehofer had threatened to block refugees coming into Germany who mostly enter through Bavaria, where the CSU dominates.  This morning, it appears a compromise has been achieved where any new policies would be introduced gradually.  Merkel is trying to build an EU-wide policy on refugees; we think she is probably going to fail on this effort as rising populism will thwart her efforts.  But, for now, Merkel has fended off this threat.