Happy Monday!  Tensions remain high with Iran, and protests expanded in Hong Kong. Meanwhile, it’s central bank week, with the Federal Reserve as the headliner.  Here is what we are watching today:

Iran:  Hawks are calling for military strikes against Iran.  However, there is no evidence of the significant build-up that one would expect before a major operation.  For example, there is only one aircraft carrier group in the region; three would be required for 24/7 operations.  Meanwhile, Iran continues to hew to a belligerent tone, threatening to breach uranium limits of the Iran nuclear deal (JCPOA).  Another factor is the high level of skepticism surrounding the U.S. evidence of Iran’s mining of the tankers.  This skepticism is, in part, due to previous intelligence missteps, including the Bush administration allegations of an Iraqi nuclear program, which was never found.  The allegations were a major reason for the incursion into Iraq.  Even the video evidence has been called into question.

To some extent, how this plays out is more a function of who has power within the Iranian regime and the Trump administration.  In the latter, SoS Pompeo and National Security Director Bolton are pressing the hawkish case; in Iran, the Islamic Revolutionary Guard Corps (IRGC) are likely pressing for confrontation.  President Trump has made it clear he doesn’t support a lengthy military involvement in the region and we suspect that, in the end, he will win out.  At the same time, the hawks in Iran can also make this calculation and try to force the U.S. into either (a) an unwanted escalation, or (b) backing down and looking weak.  Since President Trump is a Jacksonian, he won’t easily take option (b) so some sort of middle ground will be sought.  Our expectation is that the U.S. will begin escorting tankers in the Persian Gulf, and if Iran attacks those vessels then the U.S. will attack Iran’s naval facilities along the Persian Gulf.  But, we don’t expect a full-scale attack on Iran’s nuclear facilities or against civilian targets.  This assessment appears to be the oil market’s take too, as oil prices are lower this morning despite the tensions.

Hong Kong: Mass protests continued over the weekend despite the Hong Kong government’s decision to postpone the vote on the extradition bill.  Even an apology didn’t ease tensions.  Protestors have increased their demands, with some now calling for Carrie Lam, Hong Kong’s chief executive, to resign.  It is clear that Lam misjudged the reaction but so did Beijing.  We continue to watch how Chairman Xi reacts to these events.  The protests are a clear challenge to his authority. A massive crackdown, similar to Tiananmen Square, would lead to a major international reaction and force not just the U.S. but other western nations to apply economic sanctions on China, at a minimum.  We expect the authorities in Hong Kong and Beijing to try to wait out the protests; however, if Lam is forced to resign, it will create a very uncomfortable precedent for Beijing and President Xi.

The Fed: Although the BOJ and BOE also meet this week, the real “big deal” is the FOMC meeting.  First, our expectations are for no rate cut, a decline in the dots chart to reflect no more rate hikes and a potential dissent if the vote is for no-action by the Fed.  Second, Chair Powell must navigate financial markets that are pressing for rather aggressive easing going forward.  Fed funds futures have discounted an 87.9% chance of at least two rate cuts by year’s end.  In fact, the futures markets have an 85% chance of a cut at the July meeting.  By the October meeting, the odds of a target rate below 2% are 77.9%.  The analog being offered is 1995, one of the three soft landings engineered by the FOMC.

For the Fed, there are two concerns.  First, rate cuts that avoid a recession would likely trigger an asset rally. 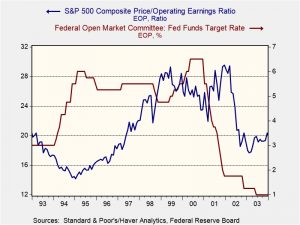 This chart shows the P/E ratio and the Fed funds target.  The P/E was a rather pedestrian 15.6x when the “insurance” cut occurred.  By July 1998, the ratio had hit 25.4x; the rate cuts that occurred during the Long-Term Capital Management Crisis sent the multiple to 28.5x.  Simply put, rate cuts could trigger a flight to risk assets that would raise worries for the Fed, especially in an era of populism.  In other words, the rate cut may not help the average American very much, but it could be a boon for the wealthy. Second, the president has made it clear that his relentless criticism of the central bank will continue.  The worry for the Fed is that its independence would be questioned if it appears the central bank cut rates under duress.  That implication would raise serious concerns about the bank’s ability to make difficult rate decisions during inflation periods.  Thus, the Fed will be trying to “thread these needles” the rest of the year.

China trade news: Commerce Secretary Ross made it clear that a trade deal won’t happen between China and the U.S. at this weekend’s G-20 meeting in Japan.  About the best one can hope for would be that a face-to-face meeting between the two leaders might restart talks.  Meanwhile, there is a good bit of behind-the-scenes jockeying among political and business leaders.  We note that President Trump delayed a planned speech by VP Pence, likely concerned that a hostile presentation would undermine any chance of fostering better relations going into the G-20.  U.S. chipmakers, concerned about losing Chinese customers, are lobbying to ease the Huawei (002502, CNY 3.45) ban.  U.S. firms, especially retailers, are warning that another round of tariffs will be damaging for the U.S. economy.  At the same time, some Chinese firms, much like what Japanese firms did in the late 1980s, have started to move some operations to the U.S.

Turkey news: This weekend, the redo of the mayoral elections in Istanbul will be held.  The candidates held a debate over the weekend, and the opposition candidate continues to hold a narrow lead in the polls.  Moody’s downgraded the country due to recent turmoil.

OPEC: OPEC ministers continue to try to boost prices with promises to cut production in the second half of this year.  So far, the markets are more concerned about rising U.S. inventories and weakening global demand.

Odds and ends:  Congressional leaders are continuing to meet to head off an autumn budget crisis.  So far, not much progress has been made.  There was a massive power outage in South America yesterday.  It isn’t clear what caused it, although cyber sabotage has not been ruled out.  U.S. cyber officials have indicated they have infiltrated Russia’s power grid.  It isn’t completely clear why such information would be published.  The article made a point to mention that President Trump wasn’t told of the operation.  Volkswagen (VWAPY, 15.78) workers in Tennessee rejected an effort by the UAW to unionize the plant.  China is cracking down on the “underground railroad” that facilitates North Koreans who leave the Hermit Kingdom for China and beyond.  Chairman Xi is scheduled to make a visit to Pyongyang on Thursday, the first visit by a Chinese leader to North Korea in 14 years.