Jo Cox, martyr: MP Jo Cox was brutally assassinated yesterday while campaigning for the “remain” vote in Leeds, England yesterday.  A Labor MP and a rising star in the party, she was attacked while leaving a meeting with constituents.  According to British media, Thomas Mair has been accused of the murder and is in custody.  The Southern Poverty Law Center reports that Mair is a supporter of the National Alliance, a neo-Nazi organization based in the U.S.  Media reports suggest his support may not have extended beyond purchasing printed materials from the group.  Mair’s brother claims Thomas has a history of mental illness.

In the wake of this attack, both sides have suspended their campaigns.  There are no post-assassination polls.  However, markets never sleep and the betting pools show a decided drop in Brexit support.

The white line shows “Bremain” betting, which bounced to nearly 69% after falling to a low of 62.5%.  The orange line, the “Brexit” bet, has clearly declined, falling from nearly 45% to 36%.  Although we won’t know with certainty for a week, the tragedy clearly broke the Brexit momentum and we suspect this may shock U.K. voters into voting to stay in the EU simply because the Brexit campaign will probably not be able to rid itself from this assassination.  If we are correct, risk markets should get a relief rally after the vote; in fact, it may begin in anticipation of a Bremain victory.

Bullard outs himself: Yesterday, we noted that there was a stray dot on the Fed’s dot chart that was clearly an outlier.  We assumed it was one of the well-known doves.  We were wrong.  To recap, here is the chart: 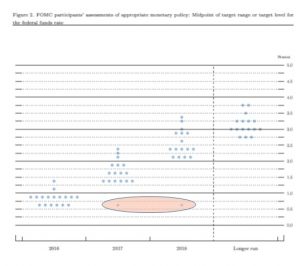 The red oval contains two dots that show no further rate increases after this year.  In a paper released today, STL FRB President Bullard revealed his dots were the ones in the oval and his paper explained his position.  The summary of his thoughts are simple, but profound.  Instead of viewing the economy as having a long-term structural equilibrium, Bullard argues that there are a series of medium- to long-term “regimes.”  These regimes, although not necessarily permanent, are persistent and thus policy should be shaped to the regime and not some theoretical equilibrium.  The other important point is that regimes themselves are not forecastable.  In other words, Bullard will assume a regime in place will stay in place until there is clear evidence of change.  The current regime is characterized by real GDP growth of about 2%, unemployment around the current level of 4.7% and inflation in the area of 2% (using the Dallas FRB trimmed mean CPI).  This implies that productivity will likely remain low and, due primarily to abnormally large liquidity premium on safe assets, fixed income returns will be low, as will interest rates.  He also assumes no recession on the horizon.

What does this mean?  Assuming this regime stays in place, Bullard believes that the proper fed funds rate is 63 bps, suggesting a target range of 50-75 bps for fed funds.  By design, if policymakers adopt the Bullard model, monetary policy will no longer be anticipatory, but will always lag its goals.  This is probably a more honest approach to policy but one we suspect will be rejected by the other 16 members of the FOMC or any future governors (there are two unfilled seats on the FOMC).  Why?  Because adopting this policy will undermine the “oracle” image that the Fed tries to project.  In other words, there will be no more “maestros.”  The problem for Bullard’s policy model will be at the point of regime change—when regimes change, the Fed will be playing “catch up” to the new regime which will probably require aggressive moves.  Understanding the new regime when an old one is going away will take time.  On the other hand, Bullard’s program will end much of the speculation on policy; note that Bullard’s dots mostly follow the Eurodollar futures market.  In effect, the financial markets will likely set rates (which they really do anyway).

Expect a heated debate on Bullard’s paper.  Although the Fed may press against his model, in practice, his scheme is really how it tends to behave.  If adopted, it will tend to change the narratives around monetary policy and make them less confusing.

Japan’s cries for help: Japanese policymakers are calling for G-7 assistance in halting the JPY’s strength.  FM Taro Aso remarked today that he was deeply concerned about the “one-sided, rapid and speculative” currency moves and hinted at intervention.  We doubt Japan will get much sympathy from the rest of the group but that may not stop Japan from intervention.  Unfortunately, in the absence of joint intervention, simply buying currency to weaken the JPY won’t have a lasting impact unless it is tied to other policies, e.g., “helicopter money.”  Still, Japan is warning the financial markets that it is ready to act.