[Posted: 9:30 AM EDT] After a choppy week, financial and commodity markets are rather quiet this morning.  There were a couple of news items of note.  The BOJ, as anticipated, left policy unchanged.  The vote was 7-2, with the two dissenters calling for tighter policy.  However, the two outliers, Takahide Kiuchi and Takehiro Sato, will be leaving the BOJ board after this meeting and will be replaced by allies of Governor Kuroda.  Thus, the governor will face less internal pressure to begin withdrawing stimulus.  The news is modestly bearish for the JPY.

Greece has avoided default by reaching an agreement with its international creditors.  The country will receive €8.5 bn in bailout aid, allowing it to make €7.0 bn in debt repayments.  The primary sticking point was the IMF.  The international lender wants European creditors to give Greece debt relief.  German leaders are loath to do this, especially with elections looming in the fall.  The IMF formally joined the agreement and will contribute €2.0 bn in new loans.  However, the IMF won’t actually disburse the funds until the EU develops a plan for debt relief.  Germany wants IMF participation for two reasons.  First, the Merkel government fears that the EU won’t hold Greece to austerity, and second, the IMF gives the bailout/austerity package an international imprimatur.

In the wake of the FOMC meeting, the deferred Eurodollar futures market was essentially unchanged.  This chart below shows the current pricing for three-month LIBOR in two years.  After the election, the implied rate jumped to levels not seen since 2011 on expectations of fiscal expansion.  However, as those expectations erode, we are seeing expected yields decline.  The fed funds rate implied from the Eurodollar futures suggests only one more rate hike.  The dots plot clearly suggests that policymakers expect to raise rates more than the market expects so there is a danger that policy may become too tight and trigger a recession. 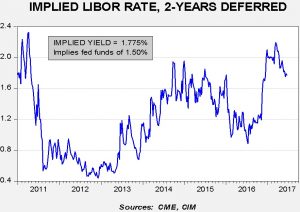