[Posted: 9:30 AM EDT] It’s ECB decision day!  The World Cup also begins today in Russia.  It’s also Flag Day and President Trump’s birthday.  The financial markets are trying to figure out if the Fed was hawkish or not.  Here is what we are watching today:

ECB: The European Central Bank left rates unchanged, as expected, although did hint that rates may begin to rise by the end of summer 2019.  However, the big news is that the bank intends to taper its QE by €15 bn starting in October (from €30 bn) and end QE at the end of December.  Thus, QE in the Eurozone is coming to an end…with caveats.  The word “intends” was not used for flourish but reflects the ECB’s position that it expects to taper but does want the flexibility to maintain asset purchases.  The markets took the statement as dovish.  The EUR initially rallied but fell sharply on the “intends” signal; in fact, the EUR is facing its biggest single-day drop since October 2017.  European equities moved from red to green on the dovish take.

During the press conference, President Draghi emphasized that the central bank has “optionality” in its decision making, suggesting the path of policy tightening isn’t necessarily inevitable.  At the same time, he did note that the vote on today’s policy announcement was unanimous, which would suggest support for tightening is reasonably solid.  Overall, the market take on the ECB is very dovish.

The Fed: The FOMC, as expected, moved to lift rates 25 bps, with a range of 1.75% to 2.00%.  Effective fed funds usually trade around the mid-point.  The median dot plot is signaling two more hikes this year, although the average is signaling a year-end rate of 2.25%.  The average plot shows rates hitting 3.00% next year and peaking around 3.5% in 2020.  The dispersion did narrow, suggesting a consensus is developing among the members.

The statement itself was a bit odd.  The “accommodation” language remained but Chair Powell indicated in the presser that the FOMC is approaching a neutral rate.  In addition, the phrase “warrant further gradual increases in the fed funds rate” was removed.  Equity markets slumped on the news (although the banks initially rallied), but the dollar failed to hold early gains and precious metals recovered.  In the press conference, Powell downplayed the potential for higher inflation, which probably led to the dollar’s decline.  The other important item was that the chair will hold a press conference after every meeting, beginning next year.  This isn’t a big surprise but, as we noted yesterday, we see it as an unfortunate development.

Financial markets continue to look for a rate two years from now around 3.10% for fed funds. 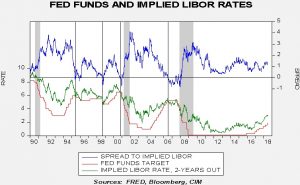 This chart shows the fed funds target with the implied three-month LIBOR rate, two years deferred from the Eurodollar futures market.  In general, the FOMC has tended to raise rates until the target moves above the implied LIBOR rates; such events are shown on the chart with vertical lines.  The Eurodollar futures are suggesting another 125 bps of tightening over the next eight quarters.

The other factor we note in the aftermath of the meeting is that the yield curve is continuing to flatten.  The chart below shows the 10-year T-note less the two-year T-note spread.

The curve is the flattest it’s been since 2007, just before the recession began.  The fact that the 10-year yield is rising slower than the two-year does suggest long-duration investors remain confident that inflation will remain under control.  The flattening of the curve is a concern as inversion is a very reliable signal of recession.  At present, the vast majority of indicators are signaling little risk of recession but the continued narrowing of the yield curve could lead the FOMC to pause sooner than their comments yesterday would suggest.

Brexit: Pressure on PM May remains high as she tries to weave a path between the “leavers” and “remainers” among the Tories.  However, Labour leader Corbyn faced a rebellion in his party yesterday.  The action was tied to the vote on an amendment that would have forced the government to negotiate staying within the European Economic Area (EEA, or the “Norway option).  Corbyn ordered Labour MPs to abstain from the vote.  Corbyn doesn’t like the EEA because it would have required the U.K. to abide by EU rules and immigration.  One shadow minister[1] and five secretaries resigned after Corbyn’s order.  The amendment failed but Corbyn’s leadership took a serious hit, which is probably good news for the GBP.

China tariffs: The administration is preparing for $50 bn of new tariffs on China,[2] although the president hasn’t decided if he wants to delay the action.  So far, the markets are taking the move in stride.  Since trade policy does tend to vacillate from initial harsh announcements to a middle ground, the financial markets appear to be reacting less, waiting for the final decision.

As the seasonal chart below shows, inventories are usually starting their seasonal decline this time of year.  This week’s decline is consistent with that pattern.  If the usual seasonal pattern plays out, mid-September inventories will be 424 mb.

Based on inventories alone, oil prices are overvalued with the fair value price of $63.60.  Meanwhile, the EUR/WTI model generates a fair value of $62.17.  Together (which is a more sound methodology), fair value is $62.23, meaning that current prices are above fair value even with the recent pullback.  Although prices remain richly valued, the degree of overvaluation improved from last week as the dollar eased modestly and inventories fell.  Falling crude oil imports and strong refining activity offset the continued relentless increase in U.S. output.

Meanwhile, Saudi CP Salman and Russian President Putin are meeting during the Saudi/Russian opening match at the World Cup.  Russia wants to resume full production.  Much of OPEC opposes any Saudi changes[3] because they lack the spare capacity to boost output.  OPEC meets on June 22-23.

Yemen: Saudi Arabia and the GCC coalition are launching an offensive[4] on the port city of Hodeida.[5]  Controlled by Houthi rebels, the port is the main entry point for food and humanitarian aid in Houthi-controlled areas.  If Saudi forces are successful in capturing this city, it will cut off the Houthis from resources.  At the same time, it would also trigger a humanitarian crisis.  Although we don’t expect this offensive to affect oil supplies, it could trigger retaliatory missile attacks on Saudi infrastructure.  If successful, oil prices would likely rise.

[1] A shadow minister would take this role if the minority party were in power; thus, there is a shadow exchequer, for example.