Good morning from the new home of the Stanley Cup!  Two oil tankers were attacked in the Gulf of Oman overnight.  Large protests continue in Hong Kong.  Here is what we are watching today:

Tanker attacks: Two oil tankers, one licensed in the Marshall Islands and the other from Panama, were attacked in the Gulf of Oman, just south of the Strait of Hormuz.  Both were carrying hydrocarbons en route to Japan.  Although we don’t know who is responsible for the attack, initial suspicions will point to Iran as the culprit.  However, the timing would be odd if Iran was the source of the attack; PM Abe is in Tehran for a two-day visit.  Attacking vessels bound for Japan would either be a ham-fisted threat from Iran or perhaps a warning to Tokyo from a nation other than Iran against cooperating with Tehran.  Or, the attack may have been done by an Iranian proxy whose interests do not fully align with Tehran.  For example, it wouldn’t be a shock that the Houthis might consider such an attack to hurt Saudi Arabia, or some unit within Iran has decided to go rogue.  According to reports, it appears the tankers were hit with some sort of artillery shell.  Oil prices jumped on the news.

We will be watching to see the U.S. reaction to the attack.  In a tanker attack last month, National Security Director Bolton blamed Iran for the attack but offered no clear evidence to back the claim.  At the same time, Iran has a clear incentive to trigger such attacks; as shown on the chart below, its oil exports have plunged and higher oil prices are one way to strike a blow against the Trump administration.

Hong Kong and the trade war: The island’s legislature has postponed a vote on the controversial extradition rule but that hasn’t led to any reduction in protest activity.  Meanwhile, there is little evidence that either China or the U.S. is preparing for a breakthrough on trade talks.  In fact, there is growing concern in China that Trump will use the Hong Kong situation for leverage in talks.  Vice Premier Liu, who has been leading the Chinese delegation on trade talks, called for additional stimulus, suggesting he doesn’t expect an agreement.  If no deal is reached, we would expect the U.S. to increase tariffs on China  at some point, both in terms of the level of the tax and the breadth of products.

A Brexit update: The Tories are in the midst of their leadership elections.  Ten candidates will be winnowed down to two in a series of votes among the Conservatives in Parliament.  The first vote, held earlier today, has reduced the field to seven.  The next round will be held in five days.  In that round, the cutoff is 32 votes.  If necessary, ballots will be cast the following two days until two candidates remain.  Then the 160,000 members of the Conservative Party will vote on the two remaining candidates and the winner becomes PM.

The problem for the candidates is that the MPs oppose a hard Brexit and want some sort of middle path to leaving, but the Conservative members want Brexit now and do not fear a hard Brexit.  So, to win in Parliament, a candidate must suggest he or she isn’t a fan of a hard Brexit, but in the hustings, a hardline is more popular.  Thus, expect a good bit of inconsistency from the candidates.  We do note that a Labour-sponsored bill to prevent a hard Brexit failed, so that outcome is still possible.

Europe: Poland’s leader visited the White House yesterday and President Trump warmed to the idea of boosting troop strength in that European nation.  Later in the day, President Trump threatened Germany with sanctions if it didn’t end the Nord Stream 2 natural gas pipeline project.  Although it isn’t completely clear, the president seemed to suggest that the new troops to Poland could come from Germany.

There are two takeaways from this event.  First, for Western Europe, the shift of the Russian buffer region eastward made cooperating with the U.S. less important.  Without the Eastern Bloc to fear anymore, Western Europe felt it could defy the U.S.  Consequently, the Europeans didn’t support the Bush administration in Iraq, for example.  A decline in enthusiasm for basing American GIs in Western Europe was also evident.  On the other hand, the former nations of the Warsaw Pact that are still familiar with the tender mercies of Russia are more than happy to offer support for the presence of American troops to prevent a return of the Russians.  Thus, there is a division within Europe regarding how to deal with the U.S. and Russia.  Second, both actions from yesterday will clearly be unpopular with Moscow.  Russia does not want a large American troop contingent closer to its border and wants the U.S. to allow it to make commercial deals with European nations without interference.  Therefore, expect some negative reaction from Russia in response to yesterday’s developments.

Mankiw Rule update: The Taylor Rule is designed to calculate the neutral policy rate given core inflation and the measure of slack in the economy.  John Taylor measured slack by the difference between actual GDP and potential GDP.  The Taylor Rule assumes that the Fed should have an inflation target in its policy and should try to generate enough economic activity to maintain an economy near full utilization.  The rule will generate an estimate of the neutral policy rate; in theory, the central bank should raise rates if the current fed funds target is below the calculated rate.  Greg Mankiw, a former chair of the Council of Economic Advisers in the Bush White House and current Harvard professor, developed a similar measure that substitutes the unemployment rate for the difficult-to-observe potential GDP measure.

We have taken the original Mankiw Rule and created three other variations.  Specifically, our model uses core CPI and either the unemployment rate, the employment/population ratio, involuntary part-time employment and yearly wage growth for non-supervisory workers.  All four compare inflation and some measure of slack.   Here is the most recent data: 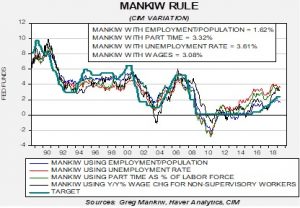 This month, the estimated target rates were little changed.  Three of the models still suggest the FOMC is behind the curve and needs to be increasing the policy rate.  However, the employment/population ratio suggests a rather high level of slack in the economy and would indicate that the Fed has already lifted rates more than necessary.  The Mankiw Rule array gives those FOMC members who still ascribe to the Phillips Curve enough information to maintain a steady stance on policy.