[Posted: 9:30 AM EDT] It’s Fed Day!  Financial markets are quiet in front of the “festivities.”  Here is what we are watching:

The Fed: We did a deeper dive in yesterday’s comment using the Mankiw models, but there are a few other important items.  First, in the statement, there are three lines that could be adjusted.

We will also be watching Chair Powell’s performance in the press conference closely.  Every meeting will give him the opportunity to put his own stamp on the central bank and we will get a better feel for his policy positions.  Another thing to watch is that he might be open to the possibility of a press conference after every meeting,[1] which would make every meeting “live” or raise the potential for action every six weeks instead of every quarter.  And, it is consistent with American society’s continued belief that transparency is an unalloyed positive feature.

Second, our position is that monetary policy transparency has taken away one of the Fed’s most potent tools, the ability to manage financial stress. 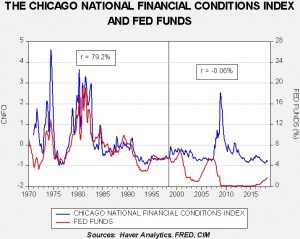 This chart shows the Chicago FRB Financial Conditions Index and fed funds.  The index is a measure of financial stress and is calculated by measuring credit spreads, the level of interest rates, volatility, etc.  The two series were closely correlated from the index’s inception in 1973 to mid-1998.  Financial conditions deteriorated when the Fed raised rates.  This meant that when the U.S. central bank tightened policy, the markets responded with actions that would slow credit growth and raise investor fears, dampening economic activity.  When the FOMC lowered rates, the opposite occurred.  Until the late 1980s, the Fed worked mostly in secret.  It announced changes in the discount rate but the market had to guess if the fed funds target had changed.  As time passed, the Fed became increasingly transparent, actually signaling a change in the fed funds rate, then telling us with a statement when actual changes occurred, moving to statements after every meeting to holding press conferences.  The more they tell us, the more we can predict their actions and the less fear we have of monetary policy.  And, since mid-1998, the Fed has completely lost control of financial stress.  It can no longer induce stress by raising rates nor can it reduce stress quickly by lowering rates.  Note that stress has mostly declined as this tightening cycle has begun.  The really unfortunate development is that when stress rises it can jump almost uncontrollably and nearly “out of nowhere.”  Although we would expect the financial media to cheer if Powell goes to a presser after each meeting, we will view it as a step backward.  Simply put, a little fear created by uncertainty would be a good thing.

Brexit: PM May continues to struggle to manage a middle ground between the “hard” and “soft” Brexit supporters within her party.  Making it particularly difficult is that the “softs” could align with Labour and bring down her government.  The “softs” have forced May into a new deadline for talks, Nov. 30 of this year.  If London and Brussels don’t have a deal in place by then, the House of Commons will decide on a path forward.  It is not inconceivable that Brexit may be so soft as to not matter much (e.g., the U.K. remains in the trade union and abides by the rules of the EU but gives up the right to vote in the EU) or that Brexit doesn’t happen at all.  Even another referendum isn’t out of the question.  A failure to leave would be bullish for the GBP.[2]

Trade: Although the North Korean summit has taken up much of the media bandwidth, there are trade events continuing.  The U.S. has slapped tariffs on Spanish olives.  What makes this rather obscure action important is that this trade action by the U.S. directly attacks the EU’s Common Agriculture Policy (CAP), which is how the EU manages farm policy.  The U.S. is specifically accusing the EU of giving illegal subsidies to Spanish olive growers but, if broadly applied, it would undermine Europe’s agriculture policy.  In addition, the U.S. could put more tariffs on China as soon as Friday.[3]  Trade tensions are an important policy “wildcard” as this year unfolds.

OPEC: The Russians are pushing for an end to production cuts; the Saudis are not so keen on the idea.  It is possible that Moscow’s recent foray into cooperation with OPEC may be about to end which would add a little more than 0.2 mbpd to global oil supplies.  If the Saudis decide to maintain production levels, or only increase modestly, then the threat of lower oil prices would be reduced.  We do note that President Trump tweeted this morning calling for lower oil prices.  As we have noted before, the president has the SPR oil at his disposal and could jawbone prices lower to ease gasoline prices during the summer vacation season.

Antitrust: The Time-Warner (TWX, 96.22)/AT&T (T, 34.35) merger was approved yesterday.  In general, we don’t comment too often on individual equities in this report; the only time we do is if an individual company’s actions or news has a broader effect on the economy or markets as a whole.  What is important about this decision is that it allowed a “vertical” merger.  Mergers are either vertical or horizontal.  Horizontal mergers are when similar firms in the same industry combine.  These approvals tend to turn on whether or not the combined firm becomes so large that it can restrain trade in an industry.  For example, if gasoline stations merge, it might reduce competition and lead to higher gasoline prices for consumers.  Assessing the impact of vertical mergers can be a bit tricky.  Using our previous example, it would be like a refiner buying a chain of gasoline stations.  It is possible that the refiner could manipulate the market to give its own stations an advantage, but that may not be in the best interest of the refiner anyway.  The last time the DOJ contested a vertical merger was in 1977 (U.S. v. Hammermill Paper), where the U.S. lost.  The last successfully blocked vertical merger was in 1972 (U.S. v. Ford Motor Company [F, 12.11]), where Ford was trying to purchase Autolite spark plugs which would have combined the #1 and #2 producer of spark plugs.  Given that this particular case also involved characteristics of a horizontal merger, the government won that case.[4]

We find this important because there is a theory circulating that increased industry concentration has created monopsonies and oligopsonies that are holding down wages.  If there are fewer firms then they could have market power in the labor markets, and increased concentration may be part of the reason wage growth has been sluggish.  Given how badly the government fared in this case, we doubt the DOJ will contest another vertical merger anytime soon.