Hong Kong: Widespread protests rocked Hong Kong overnight.  The protestors oppose a new extradition rule that would allow the mainland to bring suspects from the former British colony to the mainland for trial.  Given concerns about the Chinese legal system, Hong Kong residents worry the bill would give Beijing a method to further undermine the “one country, two systems” arrangement that was put into place when the U.K. turned over the colony.  Security forces have responded with tear gas and rubber bullets.  Despite the protests, we expect the bill to pass due to the existence of a majority of Beijing sympathizers in the legislature.

There are two ramifications of the bill’s passage that we are watching.  First, the U.S. has expressed “grave concern” over the extradition bill, indicating that the U.S. does not want to see Hong Kong’s special status undermined.  The Trump administration is engaged in trade talks with China and bringing up an issue that Chairman Xi will view as an internal matter will add pressure to the negotiations.  The protests and reaction will likely bring further support to those in Congress who have turned hawkish against China.  Second, when Hong Kong was turned over to China on July 1, 1997, there was great concern about how the CPC would treat the former colony.  At the time, there was evidence of capital flight from the colony.  However, the CPC did mostly live up to the two-system approach and the outflows slowed.  As Beijing tightens its grip on Hong Kong, we would expect to see increased outflows of capital and people, some of which will likely find its way to the West Coast of the U.S.

China: May CPI in China came in near expectations, up 2.7% from last year, led by rising food prices, which rose 7.7%.  Pork prices were up 18.2%, a 35-month high.  Pork prices are higher due to hog deaths caused by African Swine Fever.  However, the core rate, also on forecast, rose a much more modest 1.7%, up from 1.6% in April.  PPI was also on forecast but rather soft, only up 0.6%.  Overall, the lack of price pressures in PPI and core CPI suggests weakening demand. 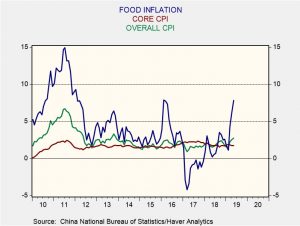 There is growing pessimism over trade talks between the U.S. and China.  China is accusing the U.S. of demanding last-minute changes to the agreement, a charge the U.S. leveled at Beijing.  There is growing sentiment in China that no deal is better than a bad deal.  At the same time, we do note that China has brought Yu Jianhua out of a pre-retirement job to join the trade talks.  Yu has nearly 30 years of experience in trade negotiations and his involvement suggests that, despite the pessimism, China does want to continue to work toward an agreement.

There is a growing chorus of reports suggesting tech companies are considering pulling supply chains out of China (here and here), and the threats of sanctions and trade impediments have affected Chinese tech companies.  Another element of the breakdown is that because of China’s massive foreign reserves it will tend to be an overseas investor.  There are reports that Chinese venture capital is being rejected by Silicon Valley.  This decision will reduce funds available to U.S. tech firms (although given current interest rates in the U.S., finding money shouldn’t be a big challenge) but will also force China to find other ways to invest the “dollar pile.”

Finally, China has loosened its rules for local governments to issue bonds for infrastructure development.  This action was likely taken to offset the negative impact of falling exports.  However, the risk is that China repeats Japan’s “bridges to nowhere” experience of the 1990s, when Japan tried to offset the impact of a strong yen through fiscal spending.

Congressional pushback: We are seeing two areas where Congress is beginning to push back against the White House.  Sen. Charles Grassley (R-IA) is advancing bills that would reduce the executive branch’s power in trade, returning it to where the founders placed it, in Congress.  Second, the Senate leadership is indicating that it doesn’t want a confrontation over the debt ceiling and the budget in the fall.  Therefore, they are effectively telling White House negotiators that they won’t press for spending cuts to entitlements.

Iran: The IAEA has confirmed that Iran is accelerating its enrichment of uranium.  Iran hasn’t yet violated the nuclear deal but the enrichment activities suggest it is ramping up to do so in the event that Iran’s leadership decides the deal is dead.  The IAEA is usually very cautious in its language, fearful of escalating tensions, so the rather blunt assessment does indicate that the diplomatic situation is deteriorating.

Javad Zarif, Iran’s foreign minister, has warned that the U.S. “cannot expect to stay safe” due to sanctions.  Zarif is also usually cautious with his words, so his blunt warning does suggest a hardening position from the regime.  There are reports that OPEC is struggling to find a date to meet, much less to determine policy, and the delay is due to Iranian obstruction.  Although the Saudis continue to insist that the cartel will maintain production cuts, Iran has little interest in cooperating on anything and will attempt to bring down oil prices by refusing to cooperate.  Iranian oil exports are plummeting, so it doesn’t really benefit much from higher prices, but the country knows that lower prices will harm its adversaries in the region.  Although we doubt Iran can scuttle an agreement by OPEC, it can, at a minimum, deny the Saudis a unified outcome.

Grain markets: The USDA admitted that poor planting weather will lead to a reduction in acreage and lower yields.  Corn prices have been rallying on reports of slow planting; a fallout from this weather is that we may see increased acres devoted to soybeans.