[Posted: 9:30 AM EDT] Although the news is historic, the market reaction is very quiet.  Most likely, the financial markets are much more interested in what the FOMC does rather than the meetings in Singapore.  Here is what we are watching:

Singapore: To some extent, the odds favored a meeting with more show than substance.  That is pretty much what emerged.  The major media is probably underestimating the mere fact that Trump and Kim even met is pretty amazing.  It wasn’t too long ago that it looked like a hot war between the U.S. and North Korea was possible.  We suspect this meeting will open up the potential for improving relations, which is important.  The most substantial impact is that the president has suspended military exercises with South Korea.  It appears that neither the Pentagon nor South Korea was informed beforehand.  Although this is an important concession, it should be noted that the U.S. can always resume participation.  China has been pushing for a “freeze for freeze” scenario (U.S. stops exercises, DPRK gives up nuclear and missile tests), so Beijing should like this outcome.  The rest of the promises were mostly aspirational.[1]  U.S. sanctions will remain in place but the key to these measures is Chinese cooperation and it looks like China is planning to ease enforcement.[2]  We should know more in the next few days, but our initial conclusion is that North Korea did well and China got some of what it wanted, although Beijing still fears the U.S. could pull Pyongyang out of its orbit.  The two most worried leaders have to be Abe and Moon of Japan and South Korea, respectively.  The fact that the U.S. would suspend military exercises without telling either leader shows that the two countries have little influence on the path of future negotiations.  This is especially true for Tokyo.

Overall, this meeting is a promising start.  However, real denuclearization with inspections is still a long way away.  At the same time, our take is that North Korea is steadily moving toward a market economy[3] in a fashion similar to China’s growth path.  That means that North Korea will need a nation to absorb its eventual exports.  The nation willing to run a trade deficit with North Korea probably ends up being the one with the greatest influence.

Kudlow: Larry Kudlow suffered what appears to be a mild heart attack yesterday evening.  Although it looks like he will survive, reports suggest the pace of work at the White House may have contributed to this event.[4]  If Kudlow decides he can’t work for the president for health reasons, the economic advisors surrounding the president will lose a voice for establishment economics.  At the same time, it isn’t obvious to us that any of these advisors matter all that much.

Fed policy: The FOMC begins its two-day meeting today.  Fed funds futures put the odds of a 25 bps rate hike at a virtual certainty, with a 65% chance of another hike at the September 26th meeting.  As usual, the statement, due tomorrow, will be parsed for clues about future policy.  We will expect the term “gradual” to remain in the statement but there is the potential that the phrase “below long-run levels” has probably outlived its usefulness.  That phrase was part of the FOMC’s forward guidance used to convince investors they could safely take leverage risks because the Fed wasn’t likely to quickly take away stimulus.  Rates are now reaching a point where that statement isn’t necessarily accurate.

With the release of the CPI data we can update the Mankiw models.  The Mankiw Rule models attempt to determine the neutral rate for fed funds, which is a rate that is neither accommodative nor stimulative.  Mankiw’s model is a variation of the Taylor Rule.  The latter measures the neutral rate using core CPI and the difference between GDP and potential GDP, which is an estimate of slack in the economy.  Potential GDP cannot be directly observed, only estimated.  To overcome this problem with potential GDP, Mankiw used the unemployment rate as a proxy for economic slack.  We have created four versions of the rule, one that follows the original construction by using the unemployment rate as a measure of slack, a second that uses the employment/population ratio, a third using involuntary part-time workers as a percentage of the total labor force and a fourth using yearly wage growth for non-supervisory workers. 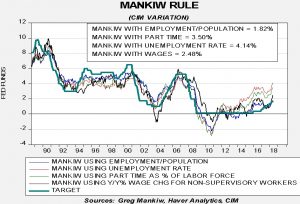 Until May’s data, we have generally expected a benign tightening cycle.  The new data is much more problematic for those expectations.  In all the iterations, the rise in core CPI did lift the fair value.  However, the improving employment/population ratio and rising wages are pushing the fair value higher for the most dovish formulations of the model.  In other words, the only variation that is policy neutral is the one using the employment/population ratio; all other variations show that policy is too easy and will be so even if rates increase as expected.  We suspect the FOMC is much more sensitive to the wage variation so even the doves will likely grow talons.  The risk that policy tightening begins to affect financial markets is rising.  If the Fed follows the normal script, expect a more hawkish statement.  If the FOMC surprises by talking like it is near neutral, look for an equity rally and a dollar slump.  We think odds favor the first scenario but it is possible that Chair Powell is, at heart, a dove.  We could get a clue as to the “real Powell” tomorrow.

Summer of pork: As the trade war picks up, nations are targeting U.S. pork exports for retaliation.[5]  Mexico and China, the two largest export customers, have increased tariffs in recent weeks.  This should lift domestic supplies, lowering prices.  Of course, the market isn’t perfect and grocers will tend to try to increase margins, at least initially.  However, the bigger discounters will probably push these decreases along fairly soon.

Just how bad is it?Venezuela reported its first case of polio[6] after officially eradicating the disease three decades ago.  This is additional evidence of how conditions have deteriorated in Venezuela due to the economic mismanagement of Hugo Chavez and Nicolas Maduro.