[Posted: 9:30 AM EDT] Good morning!  Unlike what we have had for the past couple of weeks, it’s a relatively quiet news day.  Here is what we are watching:

A deal with Mexico: As news spread that the tariffs on Mexico would be rescinded, stories broke that Mexico hadn’t agreed to anything that was not already in place.  Mexico has confirmed that no “secret” deal existed.  However, this characterization isn’t quite correct.  Mexico is taking a different tack with Central American immigrants, increasing enforcement on its border and appearing, at least, to be less welcoming.  And, despite comments from Mexican officials suggesting they didn’t offer anything new to the U.S., they did work hard to “sell” to the U.S. that Mexico is cracking down.  In the end, we suspect what is really going on here is a series of face-saving exercises on both sides of the border.  It is poison for a Mexican president to appear to kowtow to the U.S.  Therefore, the stories that suggest nothing new has emerged are part of that issue.  On the U.S. side, it is quite possible the president realized that applying tariffs could be an economic “own goal” and needed a way to back down without looking like he was doing so.  Thus, his tactic was to talk up the measures that Mexico is taking.  What we see is that Mexico is taking limited steps to try to control a serious and growing problem on the border that is going to get worse.  It won’t completely solve the problem but it is at least an attempt to bring some degree of control to it.  One item of note—Mexico is proposing to bring other countries into the asylum issue, including Guatemala, Panama and Brazil, which often act as transit nations for asylum seekers from other nations.  This action of broadening the discussion would improve the odds of slowing the flow of refugees.

Meanwhile, with China (and the Fed): President Trump is threatening to apply tariffs on an additional $300 bn of Chinese imports if Chairman Xi refuses to meet at the G-20.  China has indicated it will respond to any new trade actions by the U.S.  There are reports suggesting that plans are being made for the two leaders to meet in Japan.  Treasury Secretary Mnuchin has hinted that the two leaders might call a ceasefire, much like they did last year in Buenos Aires.  President Trump has indicated he thinks China will make a deal because he believes his bargaining position is superior.  At the same time, we note that China has announced new stimulus measures, which are helping to lift global equities.

Meanwhile, President Trump is suggesting the dollar is too strong and it’s because monetary policy is too tight.  This position has led to broadsides against the FOMC.  One of the more interesting comments has been that “these are not my people,” even though he appointed five of them to governor positions.  However, in the fog of media criticism, there are three important items to take away from these comments:

Overall, we think President Trump’s assault on Fed independence is the start of a trend.  If a left-wing populist gains office and MMT becomes the order of the day, a compliant Fed will be required for that policy to work.  Fed independence is critical when inflation control is a goal, but when inflation fears are dormant and the nation wants growth, a compliant central bank becomes necessary.  That is the path we are on.

Big tech under fire: President Trump offered a rare compliment to the EU, praising its fines on the tech industry.  Although he characterized it as a money grab, he did note that their actions have a point.  Meanwhile, the WSJ trotted out the consumer standard as a reason not to attack the tech industry.  Although that standard does offer a good reason to protect tech, the standard, like Fed independence, didn’t come down from Mount Sinai.  That standard is a legal construct that can be changed…and we suspect it will.

Odds and ends: Yesterday, we noted that Japan might go through with its plan to increase its consumption taxes.  It has now promised to use fiscal stimulus if the economy slumps.  Venezuela’s woes continue; it is now facing widespread fuel shortages and massive gas lines.  Greece has called snap elections.  Finally, yesterday’s JOLTS report, a labor market survey, showed a continued strong labor market.  One interesting data point is the elevated quits rate.  In general, a high level of quits suggests that workers feel confident they can find another job and suggests a tight labor market.  We note that quit rates are highly correlated to consumer confidence. 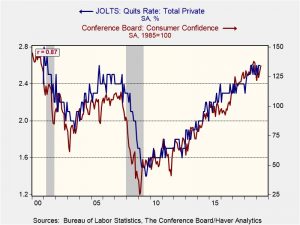